by YourJapan Blog
in Japanese Culture
Reading Time: 4 mins read
A A
0
Share on FacebookShare on Twitter

Samurais are one of Japan’s most iconic and popular characters. They are known for their strength, agility, swordsmanship, and stealth, which makes them the perfect assassin in modern-day movies. Despite being retired in the 1800s, the rich cultural history of Japanese Samurais has continued to live through and stand the test of time.

Samurai is the name of the Japanese warrior who helped end Chinese influence in Japan in the 11th century. In the fight for Japan’s freedom, samurai began the evolution of Japanese swords. At first, most Japanese swords looked similar to the Chinese, but after gaining control of Japan, the need for a stronger and more balanced blade became imperative.

Artisans at that time, who were part of the Japanese military-industrial complex, began inventing new types of swords that were lighter and gave warriors more balance and advantage in battle. One sword that stood out was Katana. Katana is a curved long single blade sword that only specially trained military warriors were allowed to wield. These elite warriors were more potent and faster than regular soldiers. Their task was to carry out high-profile missions in the interest of the Japanese dynasty.

Katana, the iconic weapon of a Samurai, is believed to cut through at most five people with a single strike if wielded by the right hands. This weapon is not only known for its strength but also its beauty. The Katana is said to be the only weapon on earth to have a mind of its own capable of speaking to the person who wields it. 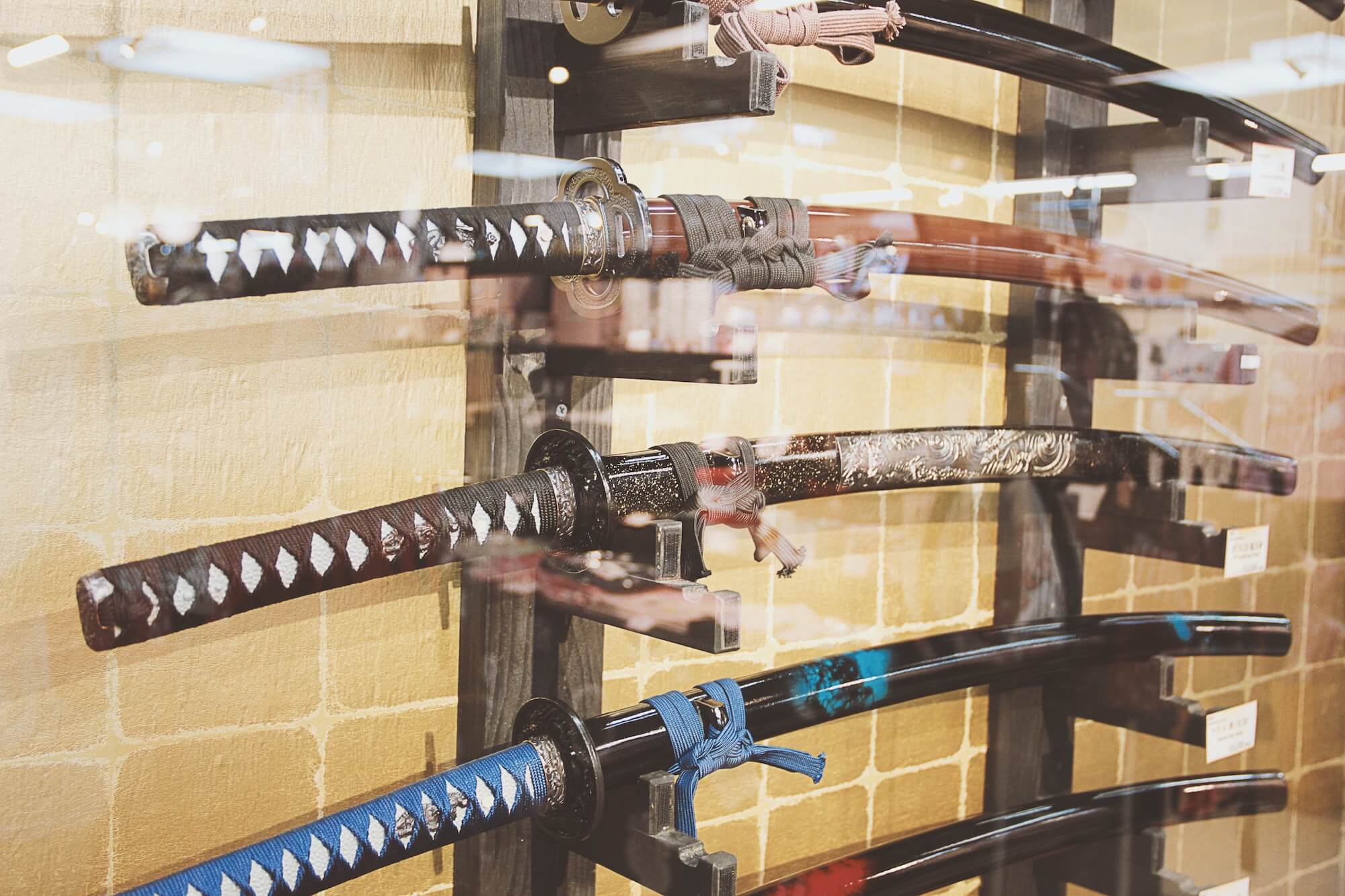 Over the years, samurai swords have been grouped into different types. These groups are based on curvature, weight, length, age, and imprinted design. Here are some of the different kinds of Katana,

This is a type of sword that is believed to precede the Katana. According to historians, Tachi was a special kind of samurai sword that was longer and stronger than any Japanese sword. The blade was only used by a handful of elite samurais, known as the feudal class samurais, which is why it was only discovered in the 20th century after intense research. During battles, Tachi is used with the blade facing downward for balance and speed.

Wakizashi is a short sword measuring between 30-60 cm in length. Used as a backup weapon, it is suitable for close-range battles. In modern-day battles, wakizashi is mainly for self-defense. Due to their size and weight, wakizashi swords can easily be carried about without discomfort. Before getting this ancient Japanese sword, be sure your swordsmanship skills are top-notch. Without proper training, the wakizashi sword can be a danger to its wielder as it is sharp and shows no mercy when in contact with the flesh.

Shin Gunto, meaning new army sword, is a modern Japanese sword. The design of this sword is heavily influenced by western culture in the 1900s. During WWII, Shin Gunto was the famous sword used in killing and beheading enemies of Japan.

Most modern-day samurai swords draw their lineage from the Uchigatana. The Uchigatana is the most famous Japanese sword. Due to its unique curvature and strength, it took craft men more than a decade to perfect the sword’s making techniques. This sword is most effective with a single-strike attack. A samurai needs to be fast, strong, and stealthy to fully unlock the potential of the Uchigatana. For those interested in understanding the techniques behind this beautiful ruthless weapon, many schools across Japan offer Uchigatana classes.

How To Make A Katana Sword

Making a single katana sword requires a lot of skill, and Japanese swordsmiths have them in excess. The production of a katana sword begins with iron sand, also known as iron ore. Tatara master, a group of Japanese experts monitors the smelting process of this sand at a high and controlled temperature. This process takes at least three days to be completed.

What To Consider When Buying A Katana Sword

Below are some key factors you should consider when buying your sword:

Safety should be your priority when buying a katana or any sword. Swords are dangerous and can cause a lot of damage to their owner if not wielded correctly. Before buying or wielding a sword, ensure to get proper sword training from an accredited sword master.

Length Of The Sword

As stated above, katana swords can be classified by size and length, with each serving a different purpose. Before placing an order of one, be sure to have a goal in mind to guide you in making the right choice.

Many governments do not permit the public carrying of swords, especially samurai swords, for security reasons. Always be conscious of the laws regarding blades in your country so as not to get in trouble with the authorities.

Swordsmanship is an honorable skill that everyone who is opportune should learn. The skill is not all about holding a sword and killing your enemies, the skill incorporates discipline, patience, endurance, and concentration in a person. When learning how to wield a sword always start with a wooden sword for your safety and that of your teacher. Also, when practicing your skills do it in an open field to avoid hurting anyone or damaging anything.