10 Tips for Train Etiquette in Japan

Train etiquette in Japan is something that Japanese people usually take very seriously.

by YourJapan Blog
in Japan Travel, Living In Japan
Reading Time: 11 mins read
A A
0
Share on FacebookShare on TwitterPin this articleShare on LINE

Train etiquette in Japan – One of the most interesting experiences travelers can have while visiting Japan is taking a ride on the extensive and timely train lines. Upon hearing about Japan’s large network of accessible railway transportation, it’s easy to get too excited about the experience and forget to read up on the proper way to enjoy this fascinating experience.

To help those who might not be familiar with Japan’s common courtesies in regard to public transportation, we’ve put together this list of 10 tips for train etiquette in Japan to ensure that you don’t just become another brash foreigner in the eyes of those living and working in Japan! 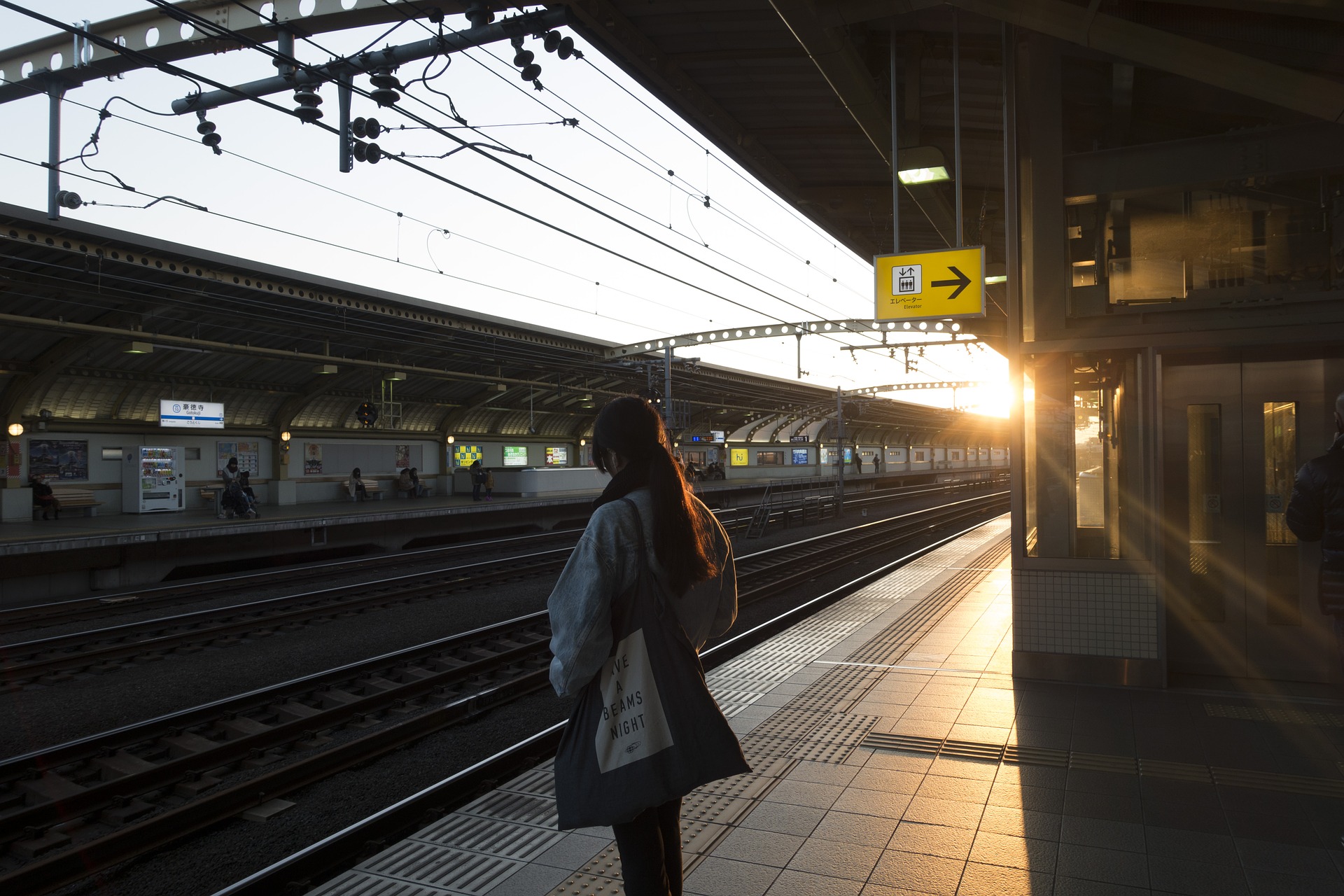 The trains in Japan are almost always on time, meaning that even if you’re just a minute late getting to your station, you’ve probably already missed your train. It’s best to arrive early so that you can wait on the platform and ensure that you’ll get a spot on the train. If at all possible, you shouldn’t run to catch your train, as you might run into people, thereby injuring yourself and others. 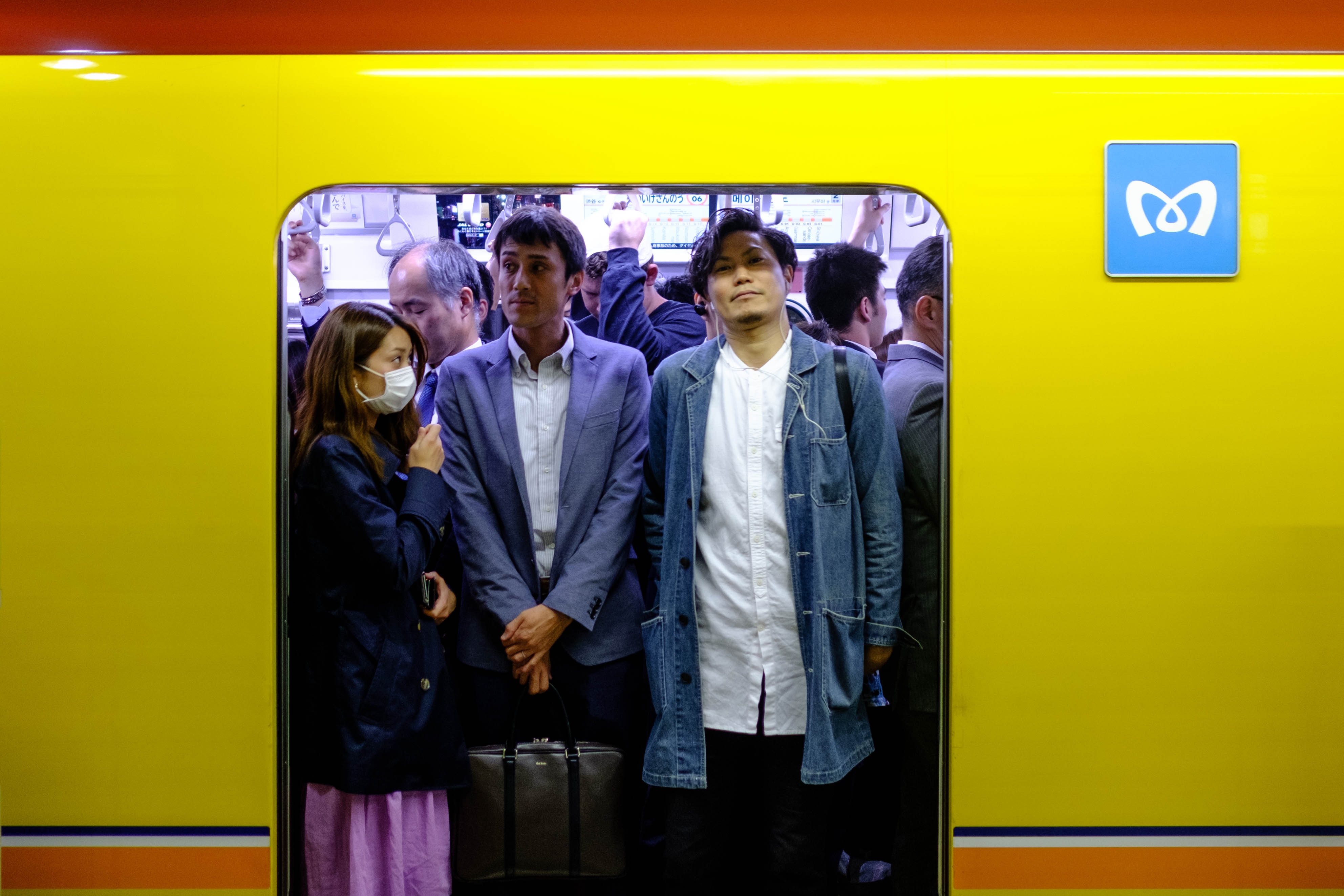 Be aware of your surroundings and what is expected of passengers while waiting for and riding the train. There are designated lines to stand behind while trains are entering and exiting the platform that should be minded. When riding the train, brace yourself by holding onto the overhead handhold rings, sitting down on a seat, or leaning against a wall.

If you fail to properly brace yourself while riding the train, you may fall and hurt yourself or others in the process. Always be sure to know which side of the train the doors are opening on in case you’re leaning on them so that you don’t fall out when you arrive to the platform. A tip for train etiquette in Japan you should know before taking the train in Japan! 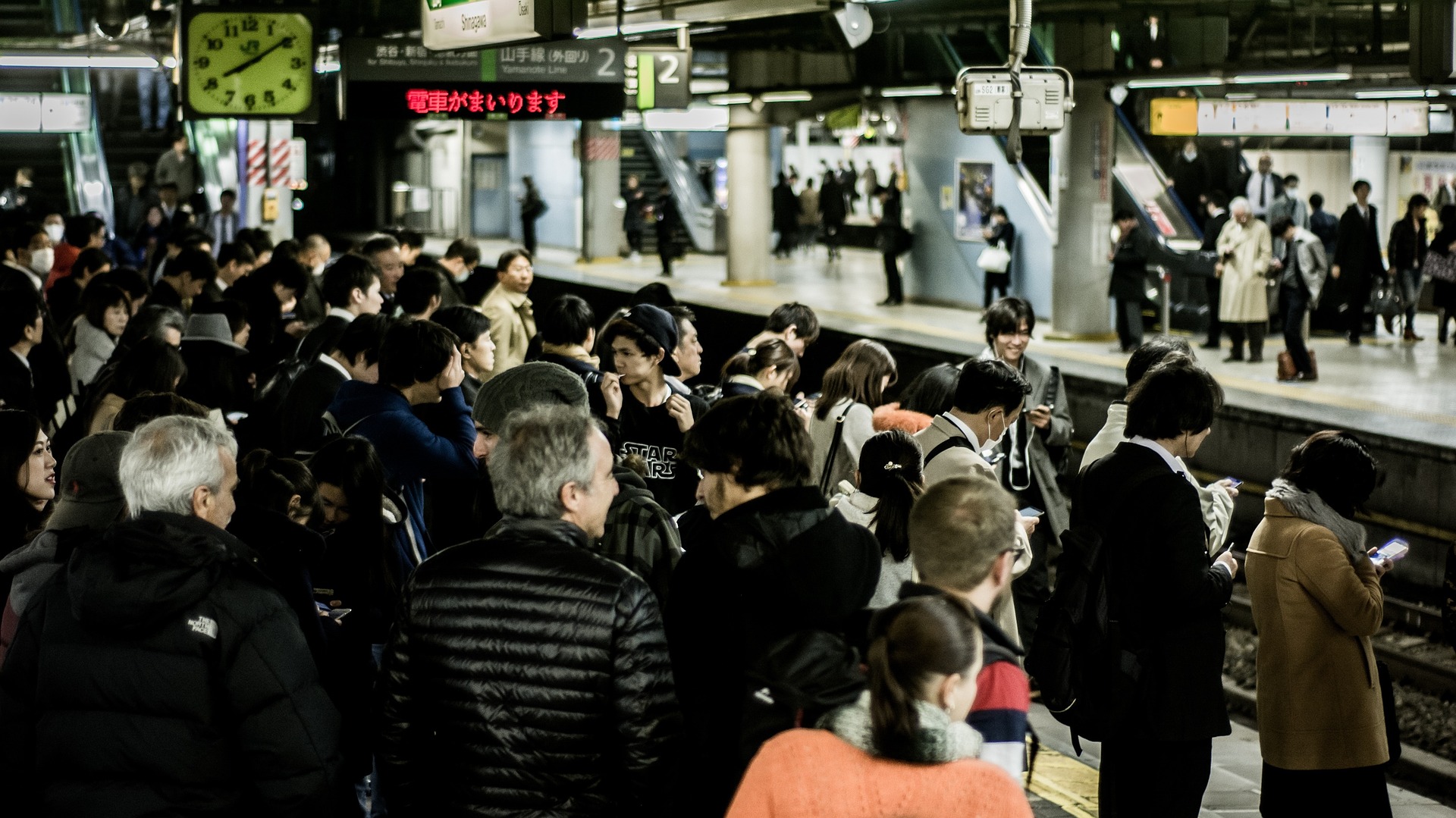 Japanese trains can get quite hectic and busy, especially during rush hour. It’s important to move quickly and with purpose when boarding and exiting the train to ensure that you don’t disturb others as they make their way on and off the train as well. When walking on the platform to your train, be quick and orderly as you line up to board the car. If you take too long to get onto the train during rush house, you’ll likely miss out on a spot. 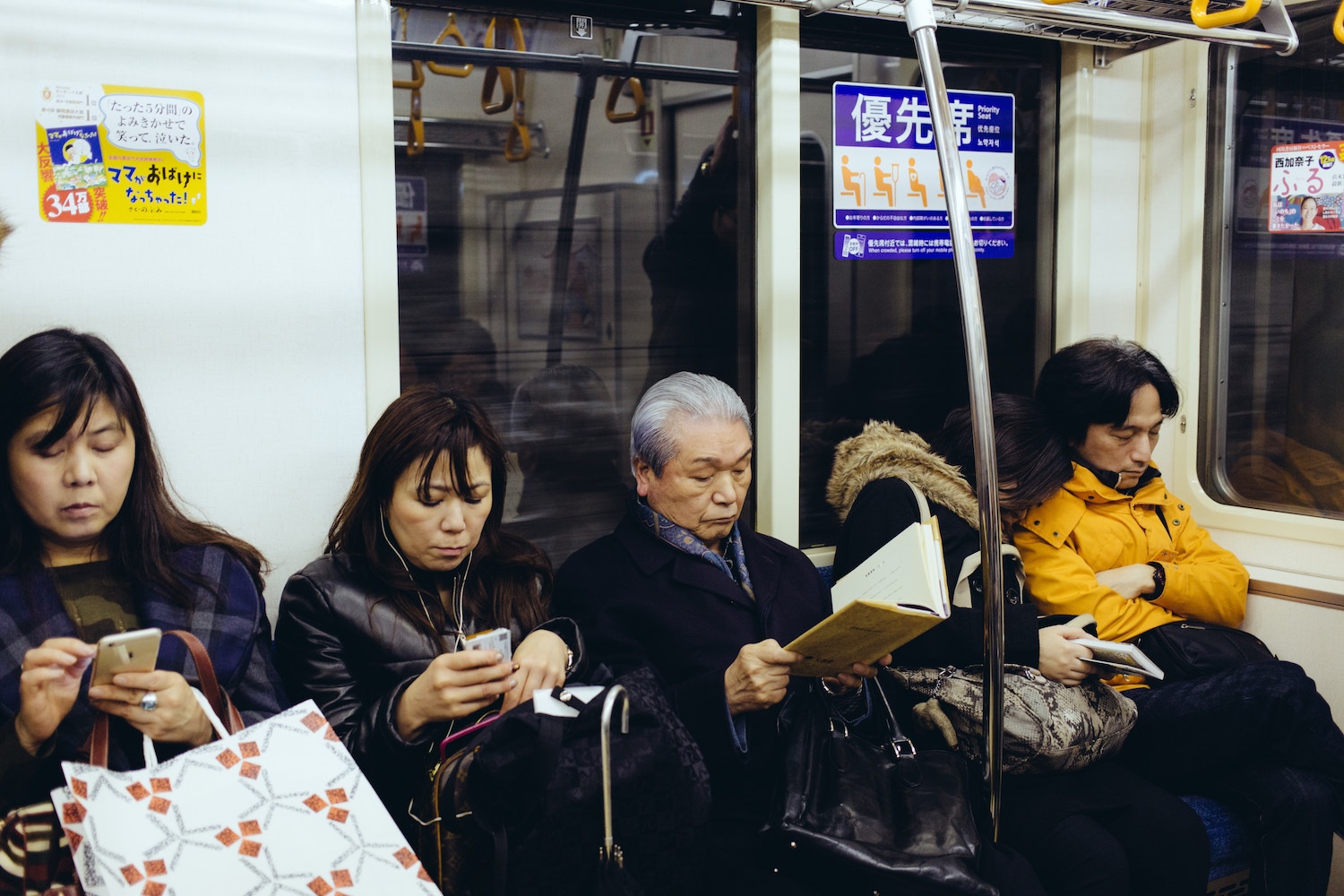 It’s considered polite to give up your seat to elderly, pregnant, or injured passengers. There is a special section on each car of every train that’s reserved for just such passengers, but these seats may be used if such passengers are not present.

There are special badges pregnant women in Japan can wear to help identify them as needing seats while riding the train. Be sure to be on the lookout for these badges and offer your seat if you see a woman wearing one in need of a seat. 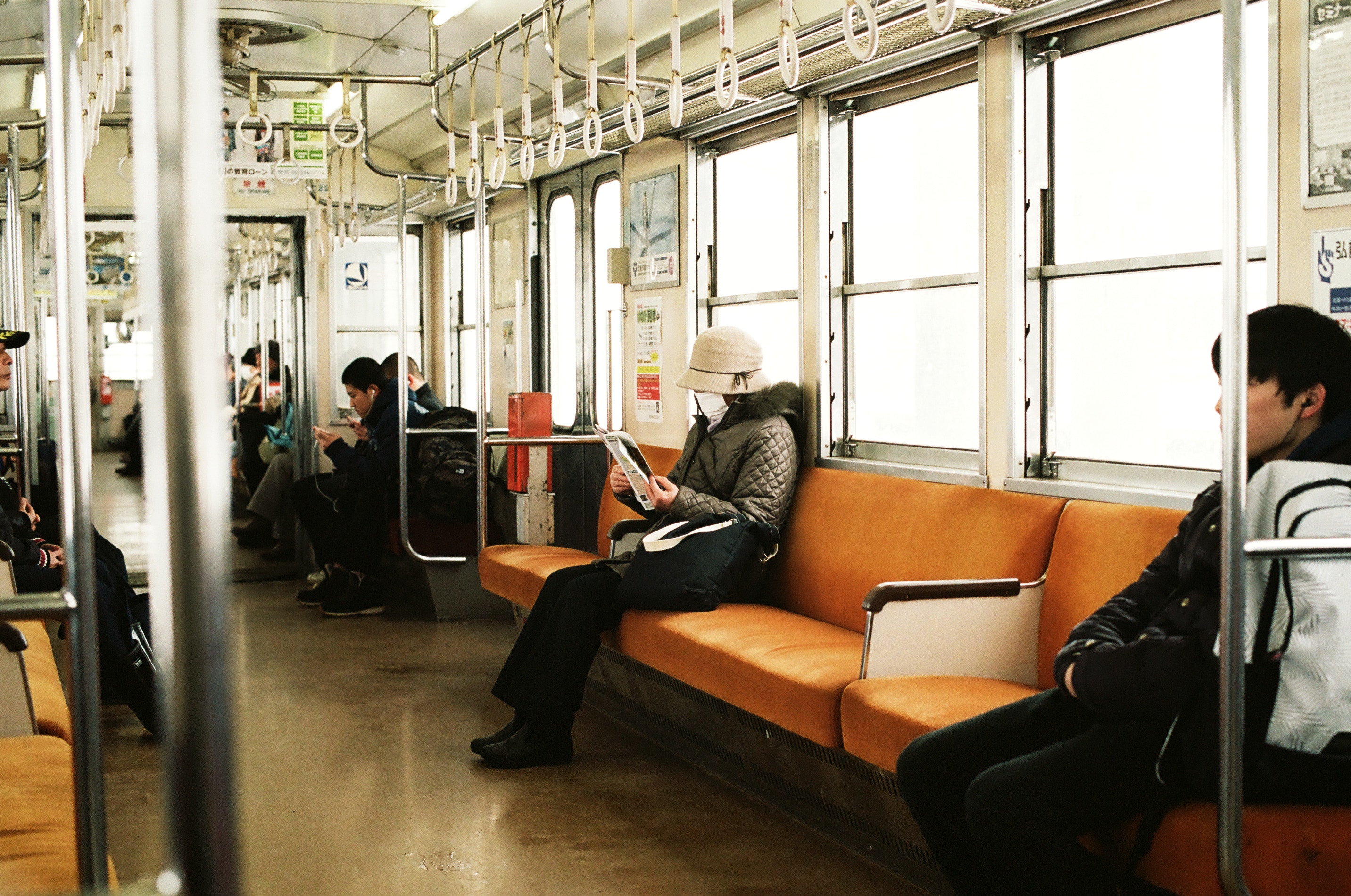 Riding the train in Japan is supposed to be a quiet affair, meaning that talking on your cell phone is not alright. There are multiple signs that can be seen clearly in every train car that urge passengers to silence their phones and not engage in phone conversations while riding.

If you absolutely must take a call, the polite thing to do is wait for the next station, exit, make your call, and when you’re done you can board the next train that’s heading to your destination. In most cases, however, an email or text that you can’t talk at the moment may save you some time and allow you to continue your travels without disturbing other passengers. 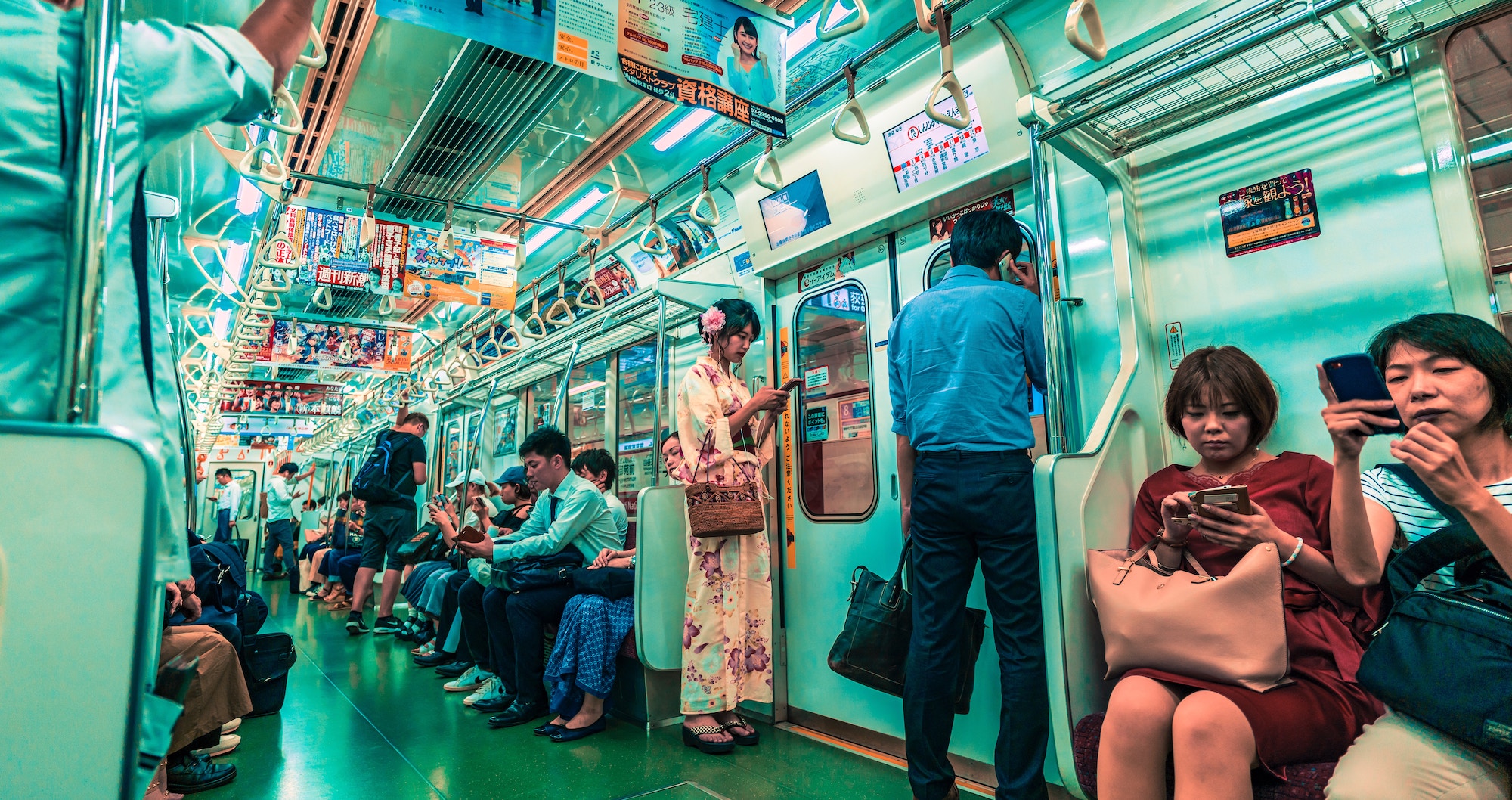 Much the same as how talking on the phone is looked down upon while riding the train, having loud conversation is also not proper etiquette in Japan. Groups are meant to be as quiet as possible, though whispered and hushed voices are perfectly fine for communicating.

Yelling and shouting can be extremely upsetting to other passengers who are trying to commute in peace and quiet, so it’s best to hold all loud conversations until after you arrive at your station and exit the train. Another tip for train etiquette in Japan you should know before taking the train in Japan!

There are times during rush hour when people may become squished between one another to allow as many passengers on the train at one time as possible. If you find yourself in such a position, it’s proper etiquette to keep your hands to yourself and try not to bump into those around you.

Having your hands down at your side or above your head to hold onto the handhold rings is generally best, as crossing your arms in front of you or holding your bag on your side or in front of you takes up unnecessary space and may push uncomfortably onto another passenger.

As with the example above, it’s best to remain mindful of your personal possessions and how they are positioned around your body or on the floor of the car. If seated with ample space in front of you, it’s perfectly fine to keep your bag on the floor between your legs, or even in your lap.

Taking up a seat next to you with your bag is bad etiquette if there are people waiting to sit, so it’s best to keep the object near your person. If standing, stay as close to your possessions as possible, keeping them on your body or by your feet at all times.

Slouching and stretching out your legs before you on a crowded train is most certainly seen as bad form. It’s best to sit up straight in a packed train and ensure that your legs aren’t sticking out any farther than they have to. If there are others seated on either side of you, make sure to keep your legs as close together as possible, as allowing them to spread may encroach on other’s passengers’ personal space.

Above all else, it’s considered proper etiquette to try your best to not stand out from the crowd while riding the train. Talking loudly, blasting music, knocking into people, and doing anything else to draw attention to yourself is considered bad form and frowned upon by the majority of the population.

Train rides in Japan are common everyday events, but are treated as times of calm and quiet. As a foreigner in Japan, you’ll likely stand out no matter what you do, but occupants riding the train will be scrutinizing you even more so than they would a native. It’s best to do everything possible to blend in and follow proper train etiquette in Japan.

Many who use trains in Japan on a daily basis are doing so out of necessity rather than enjoyment. Employees have to get to work, family members have to travel to see family, students have to go to school, and so on.