5 Tips for being Vegan in Japan

by KatC
in Japanese Food, Living In Japan
Reading Time: 9 mins read
A A
0
Share on FacebookShare on TwitterPin this articleShare on LINE

In the last few decades there has been a large increase in the availability of vegan products in supermarkets. Vegan variations of meats, cheese, yoghurts and protein powders are now widely available. There’s even more than one option for vegans in most restaurants these days. It’s become increasingly easier for people to adhere to the vegan lifestyle, should they so choose. That is, of course, if you don’t live in Japan.

Japanese cuisine is traditionally quite the opposite of a vegan’s preference. Historically, they actually have a great respect for the animal’s life and place immense value on using all parts of the animal to make it a worthy death. Of course, this isn’t about whose opinion is correct but just a small reasoning as to why the country lacks many vegan products and why often products that should be vegan, are not.

Does that mean Japan is impossible to live in, if you are vegan? Absolutely not. In fact, I have many vegan friends who’ve managed to live here for years and years. From what I can gather, this is how they’ve survived. Here are 5 tips for being vegan in Japan.

You may assume you can just google the kanji for Vegan and use it to read products in grocery stores or show it to waiters but unfortunately the word has travelled badly. Often here, vegan simply refers to ‘healthy’ rather than herbivorous. The word vegetarian also lacks and is usually considered to only mean no meat but fish is fine. Don’t assume ‘plant based’ may be an alternative either as products with this stamp will often contain eggs or dairy products.

As I said, it’s a challenge but if you could take the time to write a detailed note about what you can not eat and have that translated to be kept with you and used in different restaurants, it’ll make eating out much more manageable.

As for supermarkets and konbinis, these can be a minefield for vegans to try and maneuver. You may see a vegetable rice ball and think you’re safe but they often contain traces of meat or fish. Even some seemingly safe bags of nuts come with risk. Coming to these places prepared is currently the only option.

Use Social Media to its full advantage

The best way to know what products are safe for vegans is to join some of the popular forums and groups on Facebook or Instagram in order to stay up to date. “Is it Vegan? Japan” has been the most popular and regularly updated site and Facebook group for keeping people in the loop on how to navigate supermarkets.

There are often many small independent businesses run by foreign residents in Japan that can be discovered through the right hashtags too. You’ll be able to not only purchase authentically vegan products but you may also be able to meet other vegan people and discover how they’ve been surviving while living here.

For those of you living in the Kansai region, ‘_trick_or_treats_’ make delicious vegan baked treats and are extremely accommodating to all customers. 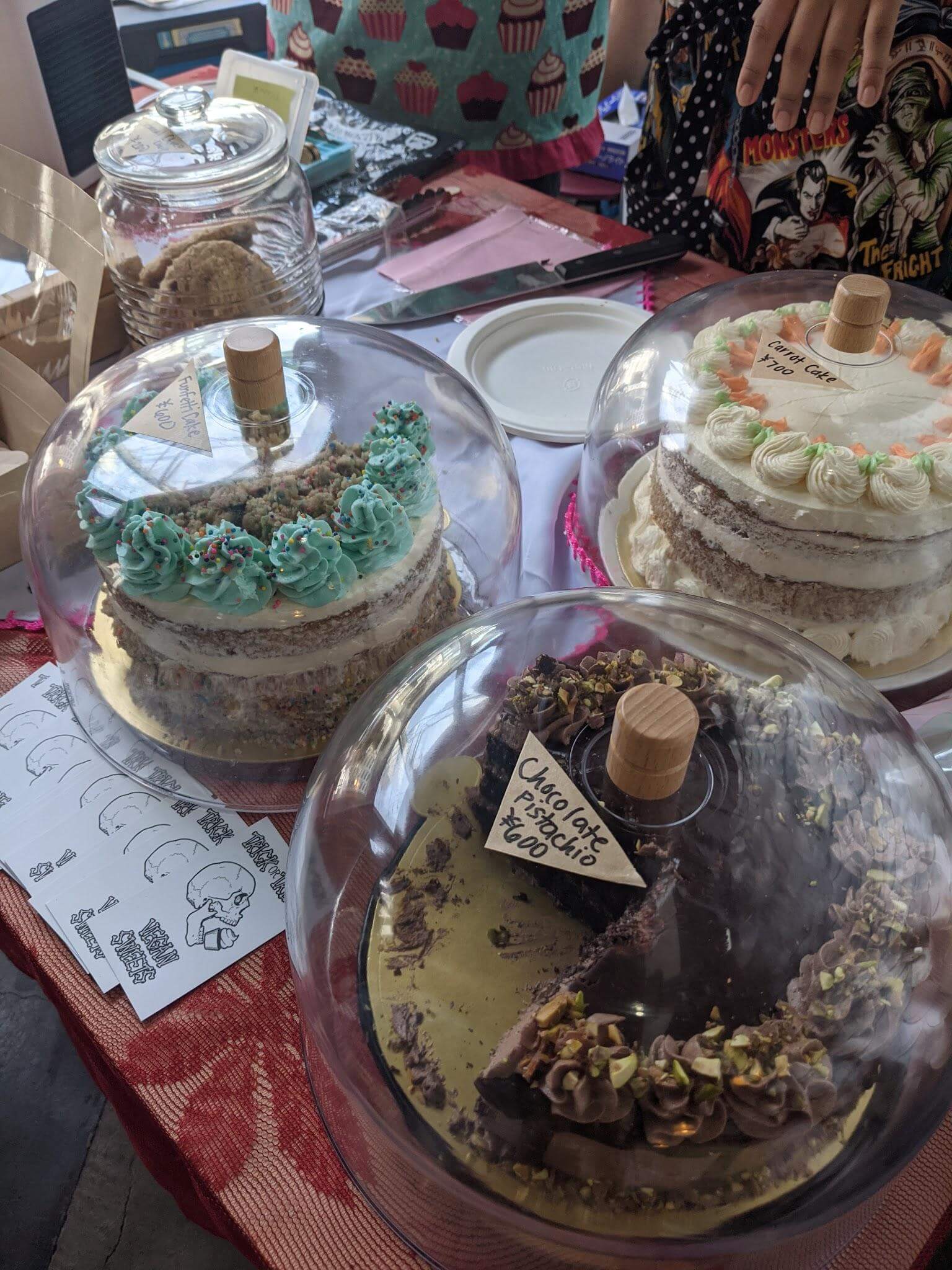 There are often many pop up vegan events and stalls that can be found throughout the country which can easily be discovered with some quick hashtag searches on the Gram.

Yes there’s always internet shopping but often moving to a new country can leave you unsure of which sites to use. The ones you’re used to may have a financially disturbing increase in delivery and the local ones will basically come with all the same problems as using a local supermarket.

Iherb, is a popular shopping site for all foreigners in Japan as they often stock a lot of food that is difficult to find here and they have an abundance of vegan snacks, baking items, protein powders and so on available. They also come with free shipping for orders over 5000 yen and usually deliver within the week.

There are some Western inspired supermarkets throughout Japan but usually something as simple as a small bag of vegan friendly jellies can skyrocket in price and something that was once an easy few dollars has become a more drastic expense that may not be worth it.

Luckily, there’s always Costco. It’s definitely not going to have as many options as you’d find at home but they do stock trusted brands to add ease of mind to your purchases and introduce new vegan products almost monthly for people to try out.

This is actually more of a recent thing in the convenience stores in Japan. It was a change introduced to accommodate the arrival of tourism brought by the 2020 Olympics. Well we all know that didn’t go ahead BUT the changes to bento options in the 7/11s has. There are actually some options for Vegans now available in the everyday bento lunch areas which do have vegan stickers plastered on them. Of course, make sure to double check with those vegan societies online for what is actually safe but I’ve heard there are some great options now available.

Japanese cuisine is rarely going to understand the dietary needs of a Vegan, it’s simply not part of their culture. Other cuisines in Japan will, however, understand. Remember, Indian food, Arabic food, Thai food, Chinese food, Italian food, Spanish food and American restaurants will more often be owned by foreign people living here and they will not only have an understanding of your needs but will most likely already have options available!

Of course, if you live in the bigger cities, finding vegan friendly restaurants won’t be any more difficult than a quick google search.

Let’s be honest, for a large percentage of us, travel is often inspired by the desire to try new foods.  Just because you’re vegan, it doesn’t mean you should miss out on taste bud adventures and luckily there are a few deliciously exciting Japanese foods that have had absolutely no animal involvement.

Here are a few examples of what you can look forward to trying:

Again, remember to check those forums for more great ideas!

Japan is definitely not the most vegan friendly country in the world. Finding plant based foods and products will be a challenge but hopefully these 5 tips will help any vegans out there who dream of temple hopping, kimono wearing, Mt. Fuji climbing but feel fearful of going hungry. You won’t go hungry, there are always ways around it and you’ll still even get to experience some new Japanese foods.

It’s also worth noting that in the 5 years I’ve lived in Japan, the cities have gone from having no vegan restaurants to having options, the supermarkets have gone from meat based everything to including more vegan friendly products and I’ve even met a few Japanese vegan people. The vegan world has improved immensely and will only continue to grow.

10 Unique Museums You Can Visit in Japan

Japanese 30th Grand Prix: Learn More About the History of Formula One in Japan