by KatC
in Living In Japan
Reading Time: 8 mins read
A A
0
Share on FacebookShare on TwitterPin this articleShare on LINE

Moving to a new country can be overwhelming in many ways. You have to learn a completely new way of life particularly if you’re moving to a country as embedded in its own culture as Japan. There is nowhere quite like it, in many ways and Japanese supermarkets are like nothing I’d ever experienced before.

I mean they have the essentials of course, aisles, registers, food but the whole shopping experience is nothing like what I was used to and when I first entered one, I couldn’t believe how different it was. Don’t get me wrong, after some trial and error, I’m now a blackbelt at shopping in Japan and genuinely enjoy it but a little foresight would have been nice so here are 8 surprises I found in Japanese supermarkets that will hopefully prepare you.

The first and most important surprise you should be mentally prepared for is how lost you’re going to be. It’s a different country with a different culture, a different way of not only cooking, but also eating. There will be a lot of products that you’ve never seen before, some interesting and whimsical, some that will cause you to question your own country’s lack of them and some that are, honestly, a little bit scary.

The name brands you’re used to will be rare, far in-between and excessively expensive. Every small thing that you need, like sauce, herbs, vinegars, meats, milk and so on, will require some study and trial and error before you will be able to comfortably navigate your way around. I remember in my first week, purchasing a simple bottle of water that turned out to be Yoghurt flavoured and let me tell you, it was not the thirst quencher I was in need of.

Due to lack of space, you won’t see big trolleys and the aisles will be a lot more narrow. You will become accustomed to a new way of manoeuvring around in order to facilitate everyone but on your first attempt, it may be a little overwhelming. After some experimenting though, it will become much easier to shop and you will develop your own routine so just don’t panic when you first walk into a Japanese Supermarket.

Everything is sold in small portions

The reasoning for the lack of available trolleys will soon become clear as you notice everything is sold in 1 portion packaging. Actually doing a weekly shop is quite uncommon in Japan and usually a trip to the supermarket can be a daily endeavour.

Not only is most food sold in smaller portions, fresh meats tend to have same-day expirations, leaving you little to no choice in how often you may need to visit.

As someone who was brought up with the weekly shop being a staple part of a successful and organised life, this was a bit of an inconvenient surprise for me.

Things I wish I knew before moving to Japan

Fruit and Vegetables are pretty expensive

Look, there are many things cheaper about living in Japan so it all more than likely evens out but my biggest qualm with living in Japan is the price of apples. Obviously it’s my decision but it physically pains me, handing over ¥400 (€3.10 $3.50) for a bag of, at best, 3 apples. I tend to have only half an apple a day to savour the expensive taste.

It’s similar for all other fresh fruit and vegetables in the supermarket, I’d often pay a similarly hefty price for mixed peppers, avocados, mushrooms, oh my god the berries!, potatoes and carrots.

It is fair to some extent that these prices be so high considering the population and that Japanese crop land only takes approximately 12% of land and the majority of that goes to rice. However, the Japanese tend to overly value appearance when it comes to purchasing food which leads to farmers often rejecting and disposing of the wonkier or bruised products that I for one, would happily bring home at a discounted price.

This surprise may be a bit me focused but I found it particularly offensive and it also led me to question a lot of aspects of my life. I love breakfast cereal. Growing up, a bowl of cornflakes, rice krispies, cheerios or granola was largely what got me out of bed so I was so sad to discover that the small quantity of available cereals are only to be found in the dessert or candy section of Japanese Supermarkets. 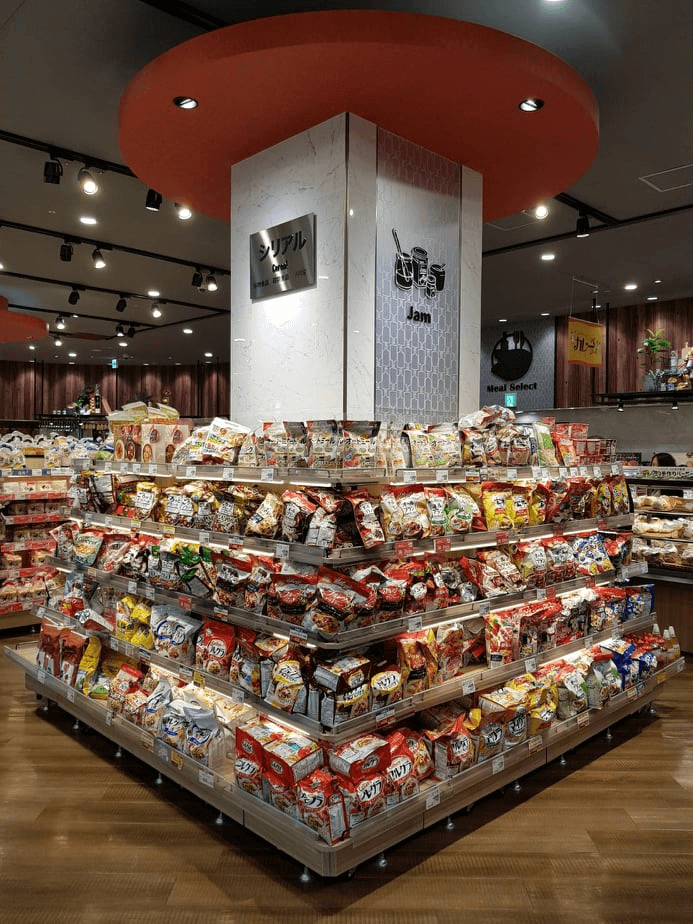 They are not respected as full meals here and are simply sold with the mere purpose of garnishing a dessert or as a treat for children. This truly changed my understanding of what a breakfast is and now I also only purchase it as an odd occasion treat but I do feel like a part of my soul died due to this transition.

Another odd and slightly upsetting thing about breakfast cereal in Japan, is that they’re not sold in the, useful for school projects, something to read while you chow down or satisfactory puzzle covered, cardboard boxes but instead just plastic bags with a list of dietary guidelines and a pitiful serving suggestion.

So much green tea

I grew up in the nineties in Ireland, where not a sight nor whisper of green tea was ever mentioned. In the early noughties, it began to get more popular as a false weight loss supplement, so it earned a small shelf in the market but as far as most of us were concerned, it was only for people with extravagant notions. 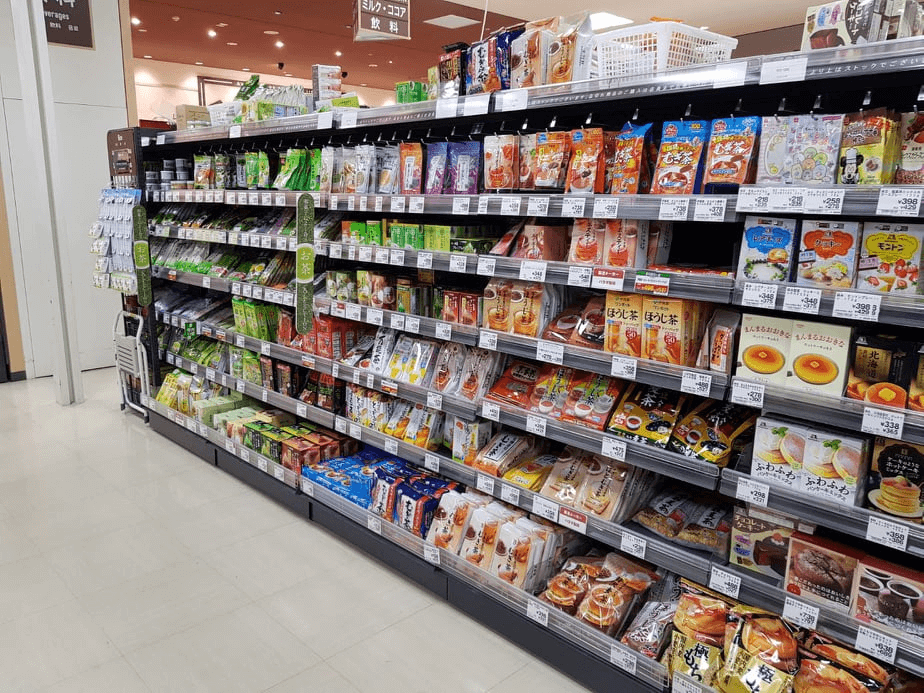 Undoubtedly, the relationship with green tea in Japan would be different. It’s drunk as frequently as water here and I absolutely love it now. With that being said, green tea is green tea. I’ve never really noticed much of a difference in taste between brands or slightly different roasting styles so how there could be so many different types to encourage an entire aisle worth is very surprising to me.

It’s especially surprising considering how all the supermarkets are built and designed in a way to use space to the best of it’s advantage but dedicating an entire aisle to green tea is imperative? Each to their own I guess but I do resent the few seconds extra it takes me to scan all the prices in order to find the cheapest one.

Where Japan is undoubtedly winning, is in the bento or microwavable meal section. One thing you’ll be surprised by is how large this section is but also by the diverse and tasty options available. Those lazy or busy days when ordering a takeaway seems like the best salvation have completely vanished for me.

Why would I order an expensive and, likely, unhealthy take away when for less that a fiver, I can get a high quality and tasty full dinner with all the essentials? 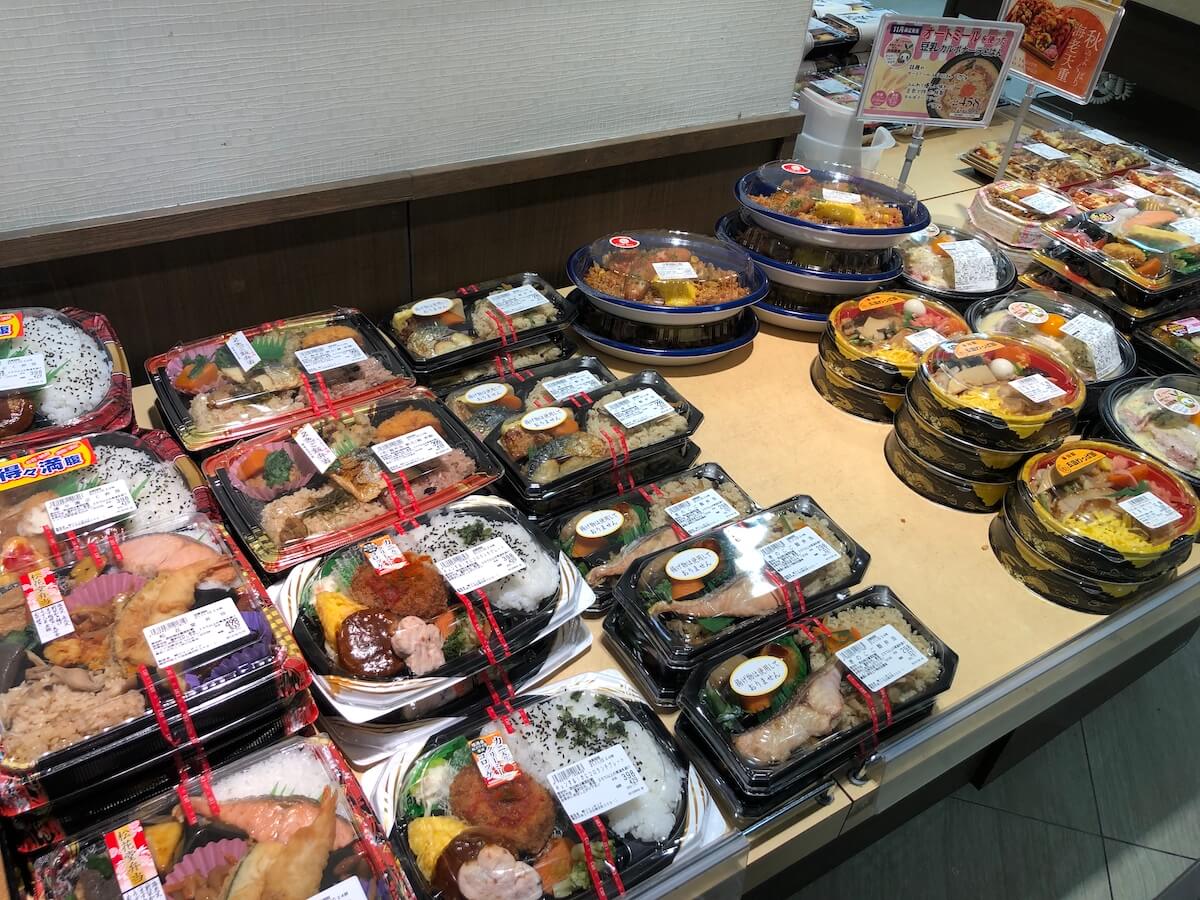 This particular section is fantastic for people shopping in a Japanese supermarket for the first time as you get to see the different types of meals the Japanese usually eat and it aids as a transition tool while you try to figure out what everything else is or how to find what you need in the supermarkets.

This, I’ve never quite gotten over, but luckily the internet exists. Japan is one of the healthiest countries in the world and I always thought that the key to a healthy lifestyle was replacing everything white with a wholemeal version. I was beyond shocked to discover that you simply can’t buy those versions here. There’s no brown rice, pasta or, most devastatingly, bread!

Unfortunately my famine evolved Irish self knows how to store white carbs like no other so eating only white everything isn’t really an option unless I want my clothes fit a little bit too tight so I’ve been ordering these products online or heading to Costco once a month to stock up.

As far as the Japanese are concerned, there is nothing in existence that can not be made cute. I’ve sat in adorably animated train carriages, I’ve eaten animal shaped rice balls, I’ve filled in hospital paperwork with adorable Pokemon characters supporting me and I own stationary that 5 year old me would be insanely jealous of. There are truly no limits and even the mundane everyday task of going to the supermarket has been cutified.

Firstly, it’s not uncommon for a supermarket to have it’s own personal mascot. Usually, an adorable, big eyed and smiley character that is often presented in statue form and throughout the store on signs and on packaging. Sometimes, you may even be lucky enough to meet the real life character if it’s one of the days they happen to be visiting that specific store, I’m yet to be so lucky. You can even purchase character merchandise at the tills on your way out and I have noticed on random people’s keychains, there does seem to be a market for it.

Secondly and most importantly, self checkouts don’t always come with the high pitch BEEP as you scan your products through, depending on which animal sign you decide to scan under. You’ll get to enjoy their recognised voices as you put through your products. My personal favourite is the duck’s quack but there is also barking, meowing, mooing, neighing and oinking available! Such a simple gesture but a fantastic way to amplify a shopper’s experience and add a bit of fun to the average day.

I hope I haven’t stolen you the fun of discovering some of these surprises yourself but I also hope that I’ve saved you from the anxiety inducing and overwhelming experience it can be upon first entrance of a Japanese Supermarket.