No more excuses not to learn Japanese!

by KatC
in Living In Japan
Reading Time: 7 mins read
A A
0
Share on FacebookShare on Twitter

Isn’t it great to live in a time where there is an app for everything? Isn’t it even better when you can use those apps for free? We are fortunate to live in a world where new skills such as speaking Japanese, are a simple few clicks away. The only issue is that there are too many options and it can take far too much time from our precious lives to decipher the good quality from the utterly useless, which is why I’ve narrowed it down for you.

Ranked repeatedly as one of the most difficult languages to learn for Native English speakers, Japanese can be tricky to get the hang of particularly as to really understand the language and use it correctly you have not 1, not 2 but 3 scripts of texts to learn and the pronunciation that goes along with them is surprisingly unlike the alphabet we’re used to.

Just recently, online platforms offering various services, especially those for students, were a real hit. Still, high school and college students daily rely on paper writing services to either write an essay or rewrite my essay and are ready to pay for prompt academic help. But now, in addition to those platforms, they got something even better – numerous apps to help them out with their studies instantly!

Taking this into consideration, I would suggest the best way to learn Japanese for free is to find the right combination of the following 6 great free apps to study Japanese.

This app teaches the old school way in the form of flashcards. You read the English phrase or word and tap to see and hear the Japanese translation.  It also includes some testing but doesn’t test everything you learn unfortunately or in any particular order.  This was the first app I ever used to learn Japanese and it did really benefit my first few months in the country.

It has absolutely no fee and minimal advertisements. It’s very easy to use but it does only teach a very specific way of saying each phrase which may lead to some confusion in your listening ability. It offers some hiragana and katakana practice but an app more predominantly geared towards them would be more beneficial.

This would be an ideal starting point for you, particularly if you’re planning on visiting for vacation as it’s a great way of nailing the basics for a polite trip.

This app offers a more traditional way of learning. Think back to multiple TV shows from the 90s/00s where characters learned languages by listening and repeating to their cassettes or CD players. This is very similar.

There is a wide array of conversations, vocabulary and phrases that you can play, listen and repeat in order to practice. It also offers Katakana and Hiragana charts but less physical effort than many other apps.

It’s the perfect app for auditory learners and everything is completely free but be prepared for a lot of advertising.

When considering learning Japanese, you may feel it only necessary to learn how to speak the language but studying Hiragana and Katakana as well, will highly benefit your practice. It is important to understand the sounds of each character in order to have proper pronunciation which is a very important part of speaking Japanese as a small sound difference can change a sincere compliment into a harsh insult.

This app gives you absolutely everything for free when it comes to learning both scripts. You get to physically practice writing, hear the sounds as they’re meant to be and play game-like quizzes to test your skills as you progress.

This app is ideal for those interested in learning kanji along with being incredibly useful for those practicing hiragana and Katakana. The app was designed to benefit anyone preparing for  the JLTP and offers both study and testing options. It also has very detailed grammar explanations.

You have immediate free access to all Hiragana and Katakana reading and writing practice along with thousands of Kanji characters. There are no time limits or forced advertisements. The only major downfall is the lack of sound, it would be much more beneficial to hear each character but it’s the perfect app for reinforcement and if used along with auditory Japanese apps, you’ll have everything you need to not only gain the ability to converse in the language but also to understand the language. 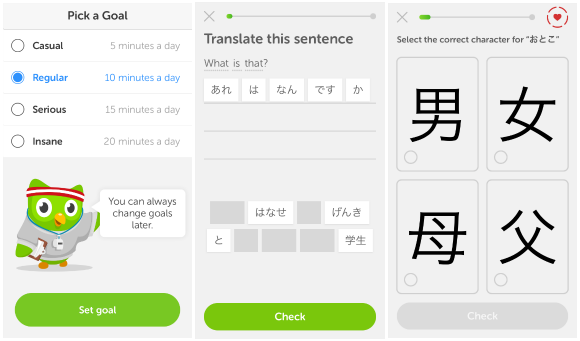 I have been using Duo lingo myself, for years. It combines most aspects of language learning into an almost game like structure.  It is probably the most motivational of the available apps, regularly encouraging consistency. It keeps track of how many days you’ve studied, reminds you to review previously learned topics and provides a score board where you can compete with friends and stay accountable. It also creates a logical pattern for learning as you can not move onto the next topic without completing the other.

There are limitations to using the app for free however, it gives you 5 hearts or “lives” everyday and once you’ve made 5 mistakes throughout your practice, you can’t learn anything new for the rest of the day without paying. However, you may still review all previously learned topics which on completion, can give you a free extra life.

Duo Lingo offers reading practice, vocabulary practice, listening and sentence structure practice. There is absolutely no need to pay for the extra bonuses the app offers unless you want to but there are some forced advertisements while in use. It’s a fun and motivational way to keep studying on a daily basis and although it lacks grammar explanation, it does allow the brain to figure it out leading to a more substantial lesson. 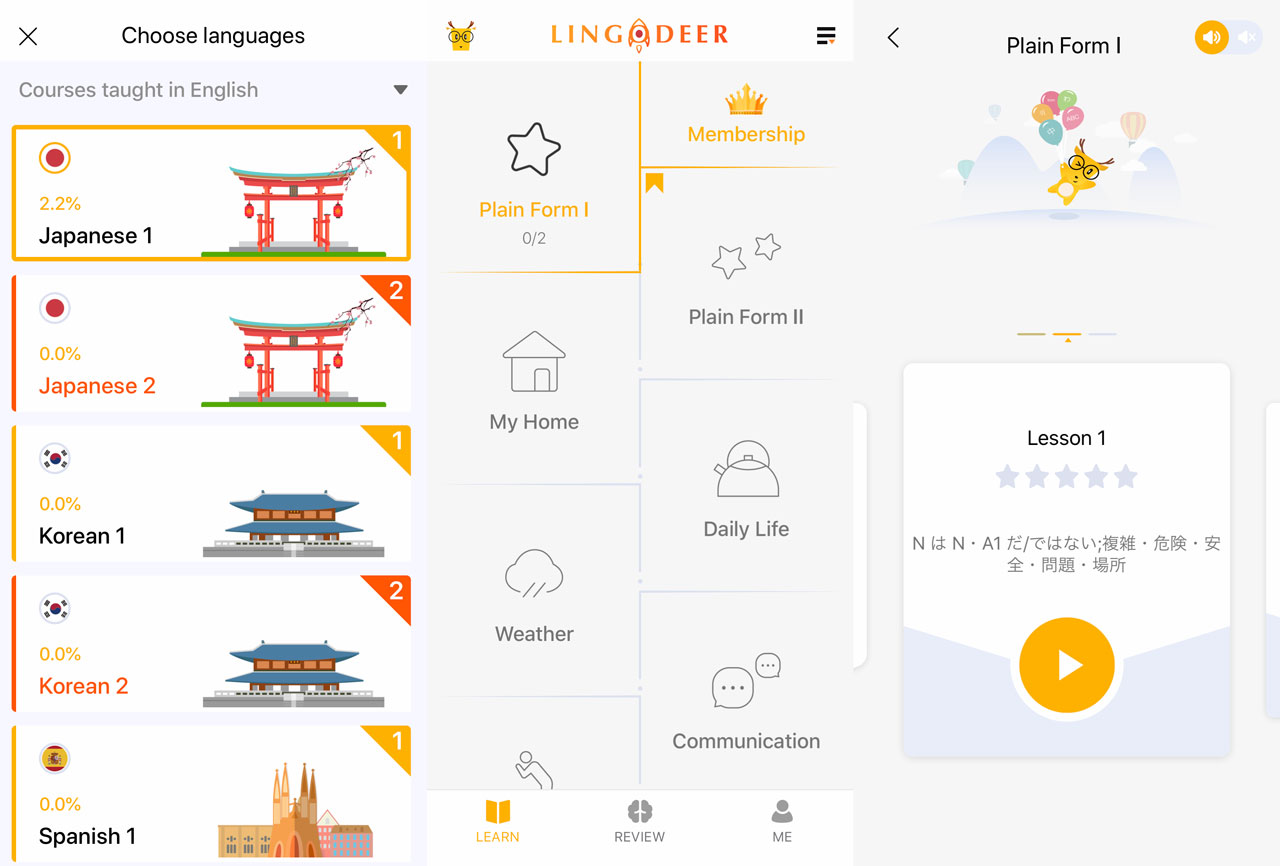 This is very similar to duo lingo in it’s game like nature and inability to progress further without completing the current topic. It also provides speaking practice, asking users to talk into the mic on their phones as the app recognises any potential errors in pronunciation.

Along with this feature, it gives guides in writing all Japanese characters and breaks down all sentence structure for you to piece back together. It has detailed grammar explanations and fun daily quizzes.

The major issue is that it is only free for alphabet learning, introductory lessons and a travel phrasebook. These are still fantastic things to learn and because of the layout of this app you will learn them and have fun while doing so. It’s a small fee to continue onward but even to just use it for it’s free options will greatly benefit your practice.

With these 6 great free apps for learning Japanese you’re officially out of excuses not to start. Any one of them will benefit your learning and finding the appropriate combination will have you bragging about your multilingual ability in no time. We all find ourselves bored and waiting somewhere, so why not throw on a pair of headphones, download a free app and get studying.