Here are 10 things to do to make the most out of your time in Osaka without breaking the bank.

by KatC
in Japan Travel, Living In Japan
Reading Time: 9 mins read
A A
0
Share on FacebookShare on Twitter

Free things to do in Osaka – Although the experience is worth it, Japan is definitely not one of the cheapest countries to visit.  Eating out, accommodation, transport and entertainment can do a lot more damage to the wallet than one might hope but luckily there are always cheaper options and Osaka offers a lot of free things to do that will provide any frugal traveller all the entertainment they could need.

Here are 10 things to do to make the most out of your time in Osaka without breaking the bank.

When planning a trip to Japan, the image of standing in front of a beautiful temple beckons us and it can be easily sought at Shitennoji temple without ever having to take out your wallet. 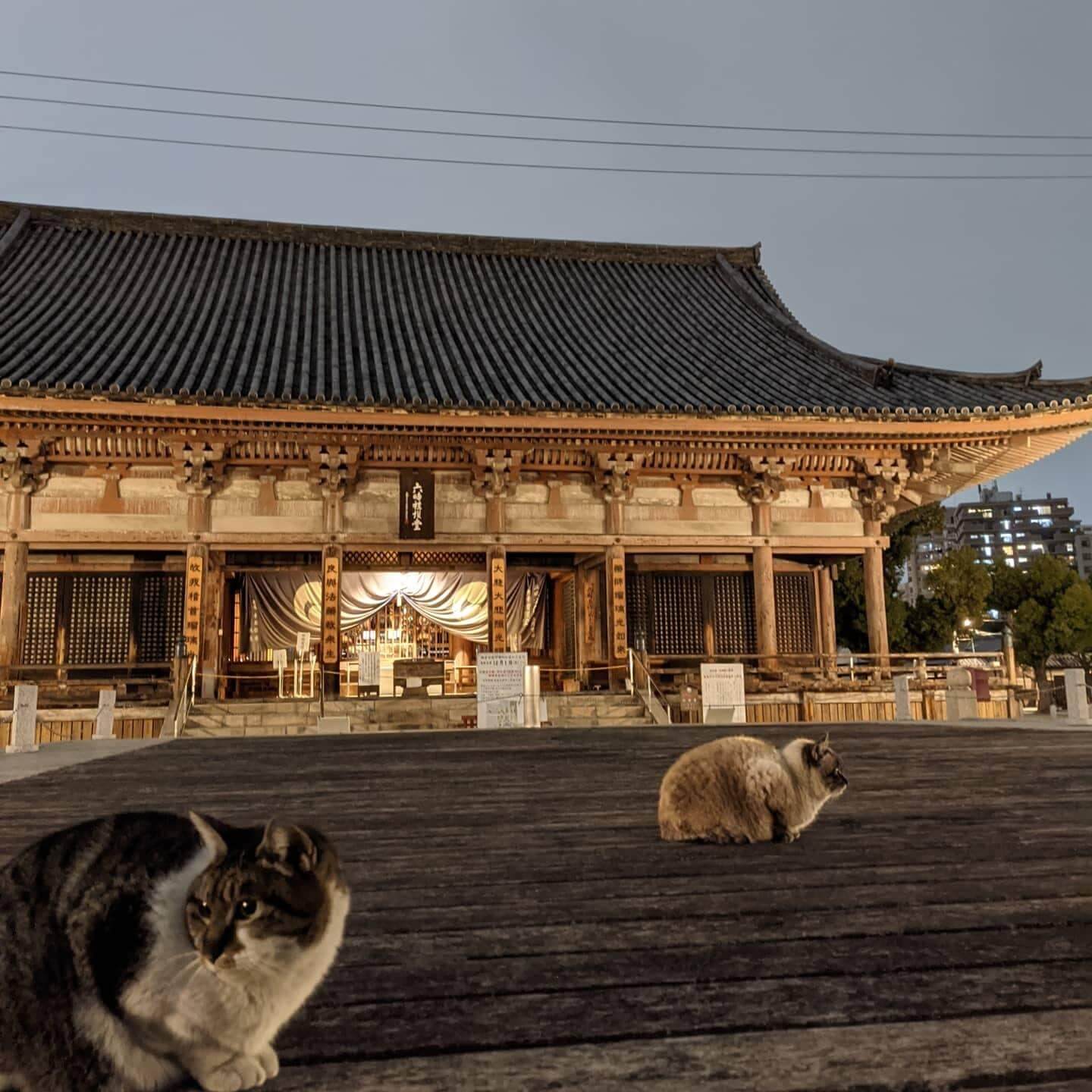 Although the temple area has been rebuilt many times, this is Japan’s oldest temple and was originally founded in 593 by prince Shotoku Taishi who played a major role in introducing buddhism to Japan.

There are some paid areas within the temple grounds but the surprisingly large area itself is free to roam around. With stunning architecture, a peaceful atmosphere, postcard worthy photo opportunities and strangely, many well fed cats, it’s the perfect place to spend the day free of charge while embracing the Japanese culture and enjoying some beautiful sites. 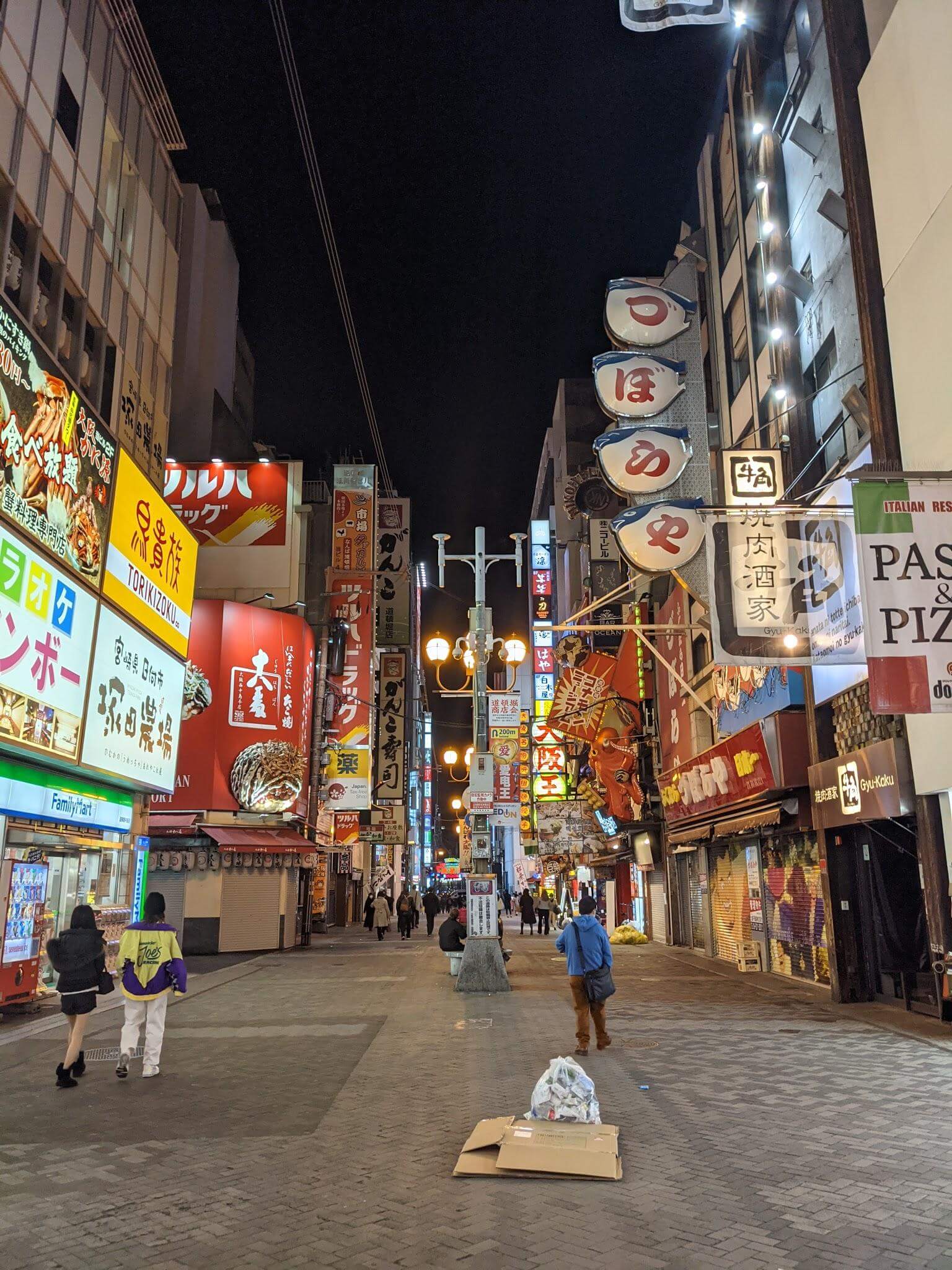 Osaka is known for its playful colours, neon lights and gaudy signage. It’s not a city that takes itself too seriously which leads to constant free entertainment as you just stroll through the streets. The most famous area to soak in this fun atmosphere is Dotonbori in Namba, where the eccentric billboards and restaurant signs provide non stop, free entertainment as you walk.

Dotonbori is also home to the Glico running man, one of the most famous landmarks in the city. It’s an unnecessarily large advertisement for glico candy, showing a man running with his arms up in victory and was first displayed in 1935 and most recently updated in 2014. It can be seen best from Ebisubashi Bridge, a central point of Dotonbori often used by locals, as a meeting point and as a place to celebrate any sport related victories.

Check out the giant lion’s head at Namba Yasaka Shrine

Not too far from Dotonbori, you can also find the Yasaka shrine. It may not give you hours of entertainment but the large lion head shaped stage is definitely worth the visit. Built in 1975, this shrine is said to swallow evil spirits and provide luck, particularly for school and business endeavors. 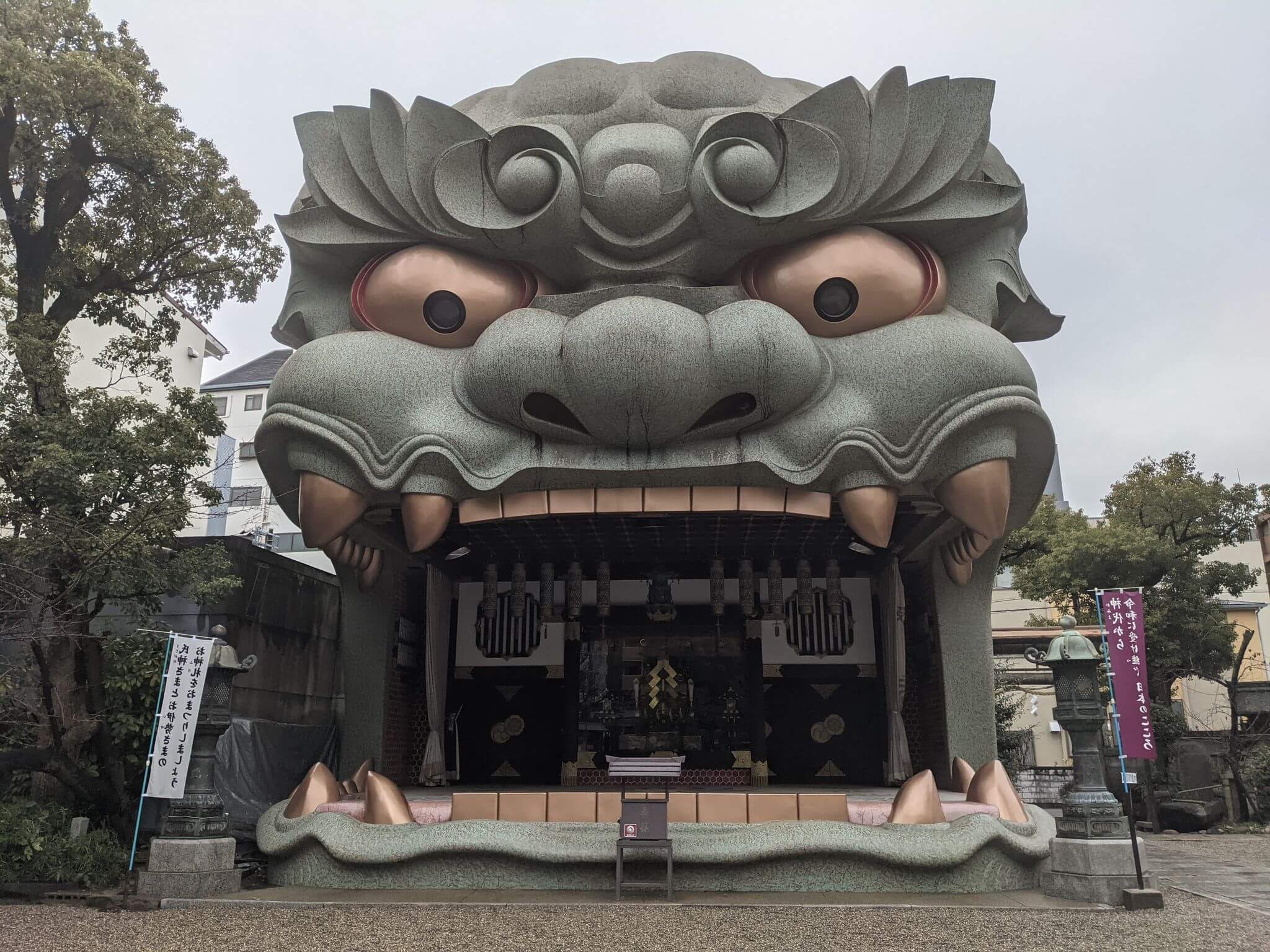 The shrine even hosts it’s own annual festival on the third Sunday of January where a large ‘tug of war’ competition is held, definitely worth seeing if you happen to be there at the right time, you’ll get double the fun and none of the pay!

If you’re looking for a more elegant option then don’t worry as Osaka’s most famous and aesthetically stunning shrine is free too!  It was originally built overlooking the ocean and, according to legend, is dedicated to the three Gods of the sea, thus is popular among sailors and fishermen. It’s especially cherished as it hosts the oldest example of architecture associated with Buddhism in Japan. 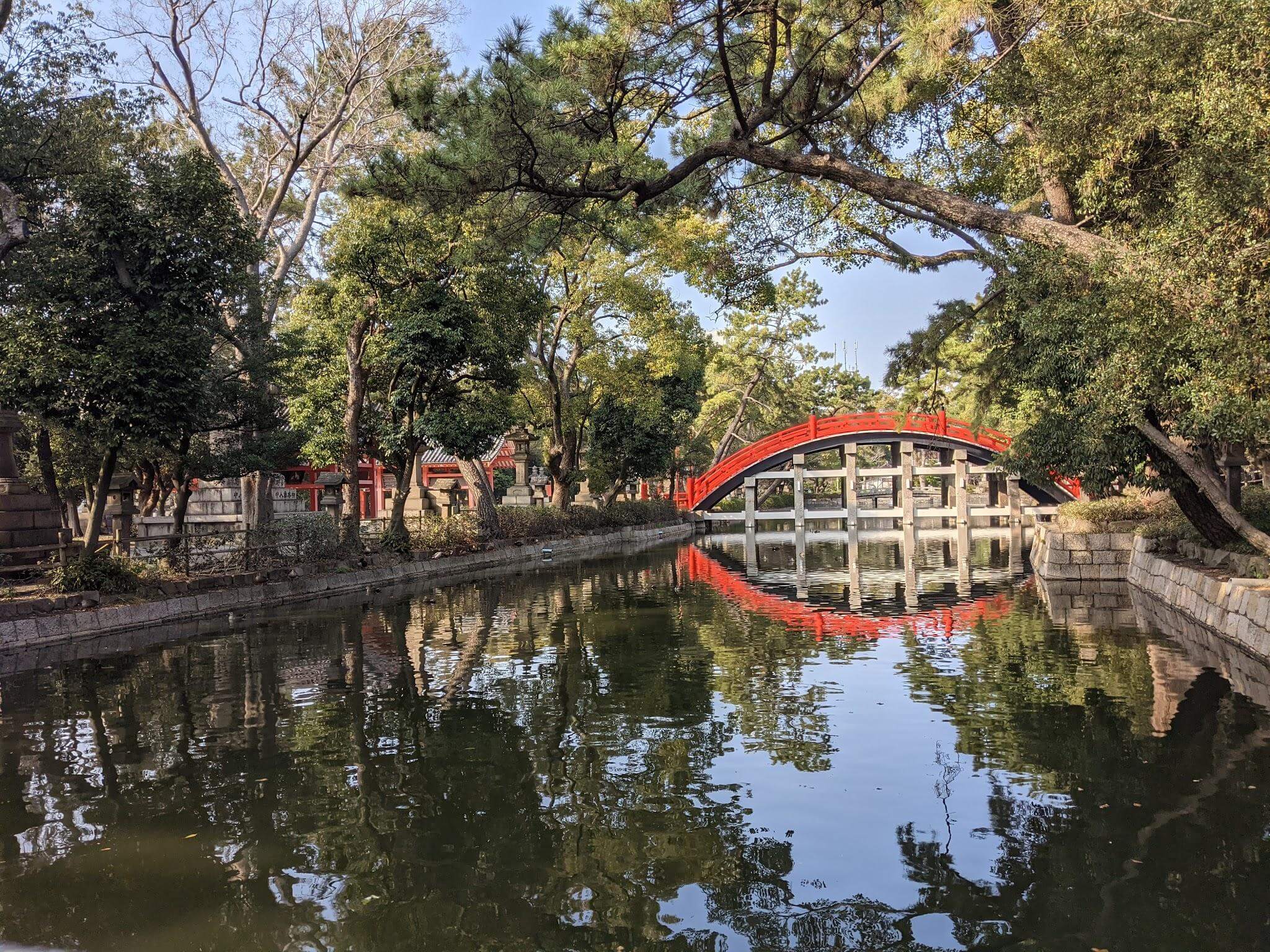 It’s a large diverse area, with stunning buildings, vivid plants and is highly admired for its picturesque, steeply arched, red bridge.  The peaceful atmosphere surrounds you as you see many people stroll around the grounds abiding by traditional prayer and action allowing complete cultural immersion.

All areas are free to wander and Sumiyoshi park is only 5 minutes, walking distance, away. The park offers more fun free activities too including incredible play areas for children, superb natural views and plenty of interesting people watching such as the elderly frequenter’s enjoy a game or two of mahjong.

Exploring parks, particularly in Japan, is an underrated free way to spend your time. In Osaka, you will find an abundance of large, picturesque, modern parks. These parks offer a different experience throughout the seasons. Autumn and Spring are particularly advantageous times to go. The Sakura in full bloom is a rare and free treat not to be missed if you happen to be in Osaka during Cherry blossom season.

Osaka-jo is possibly the most famous as it’s home to Osaka castle which can be admired from many scenic angles. There is also Ryokuchi park, where you can find free BBQ rentals and Utsubo park, found close to Namba, sits perfectly amongst the big city buildings, offering an array of colourful flowers and fairytale inspired art throughout.

Along with scenic beauty, the parks offer some of the best people watching opportunities. You can expect to see groups of teenagers practicing perfectly synchronized dance performances, animal lovers bringing their dogs, cats, rabbits, owls, eagles and even hamsters for a mid day walk, large markets celebrating different universal holidays and free yoga lessons. Parks in Japan are an entire experience and Osaka has any amount of stunning options to choose from when you’re looking for a day of free fun.

Take in the city view at Abeno Harukas Skyscraper

When looking for things to do in Osaka, you’ll often see ‘The Umeda Sky building’ come up as an option and of course it does offer you a pretty intense and magical view of Osaka but I’m not sure if it’s worth the hefty ticket price as there are many large buildings available, where one can just ride the elevator to the top floor and get a free view, that’s just as spectacular. 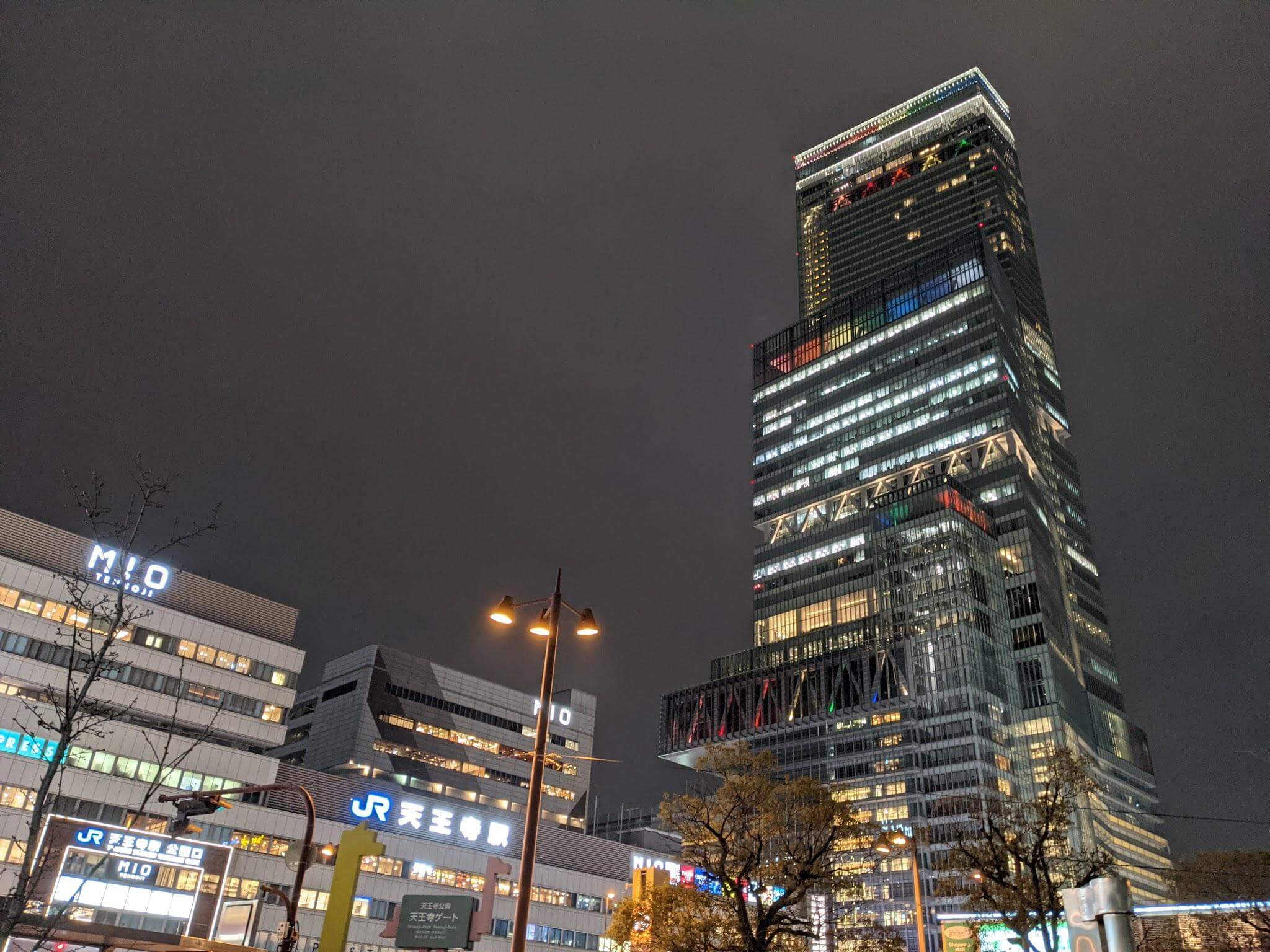 One example of this is the ‘Abeno Harukas Skyscraper’.  The building does require tickets to get to the top but if you get out on the 17th floor where the tickets can be purchased, there is a garden area that is completely free of charge where you can sit and soak in the scenic sights.

Although considered a slightly dangerous part of Osaka, there is no other place quite like Shinsekai and dedicating a few hours of your trip to wander around this area, is the perfect, free way to experience a unique part of Japan. 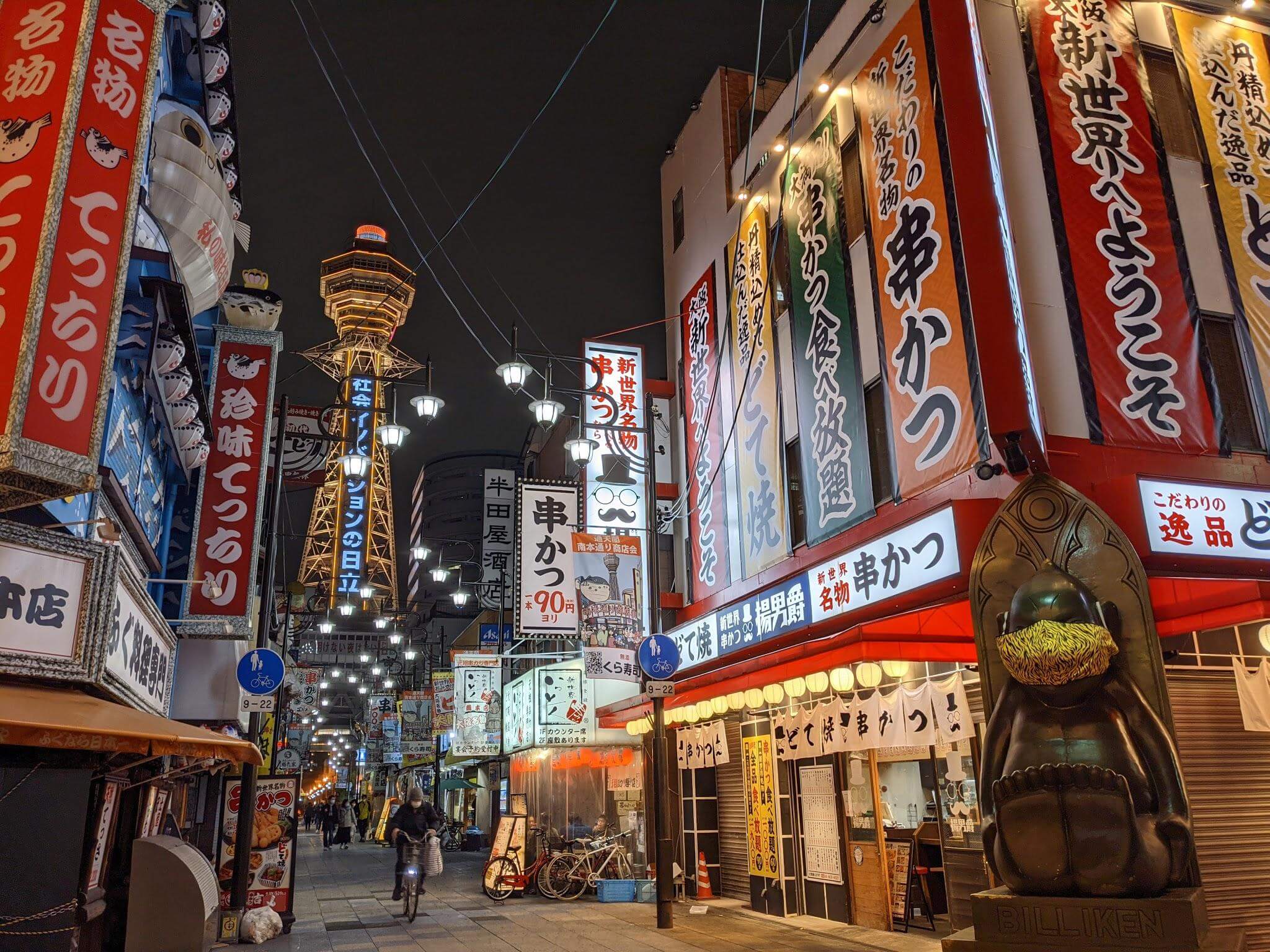 The intended plan was to construct an area that resembled a mixture of Paris and Coney Island. The Tsutenkaku Tower was built in ode to the Eiffel tower in 1912 but due to the War, the whole area was neglected. Although further construction did eventually occur, it left the location with very little similarity to either city but you can still enjoy the clear intentions and the chaotic but playful atmosphere in the colourful jungle that was left behind.

Be entertained by the ‘Osaka Obaachans!’

While enjoying Shin Sekai, why not take a break to be entertained by the Obaachans? ‘Obaachans’  means Grandmothers and that’s exactly what this comedic singing group is made out of. They perform the first Sunday of every month in Tsutentaku Tower. 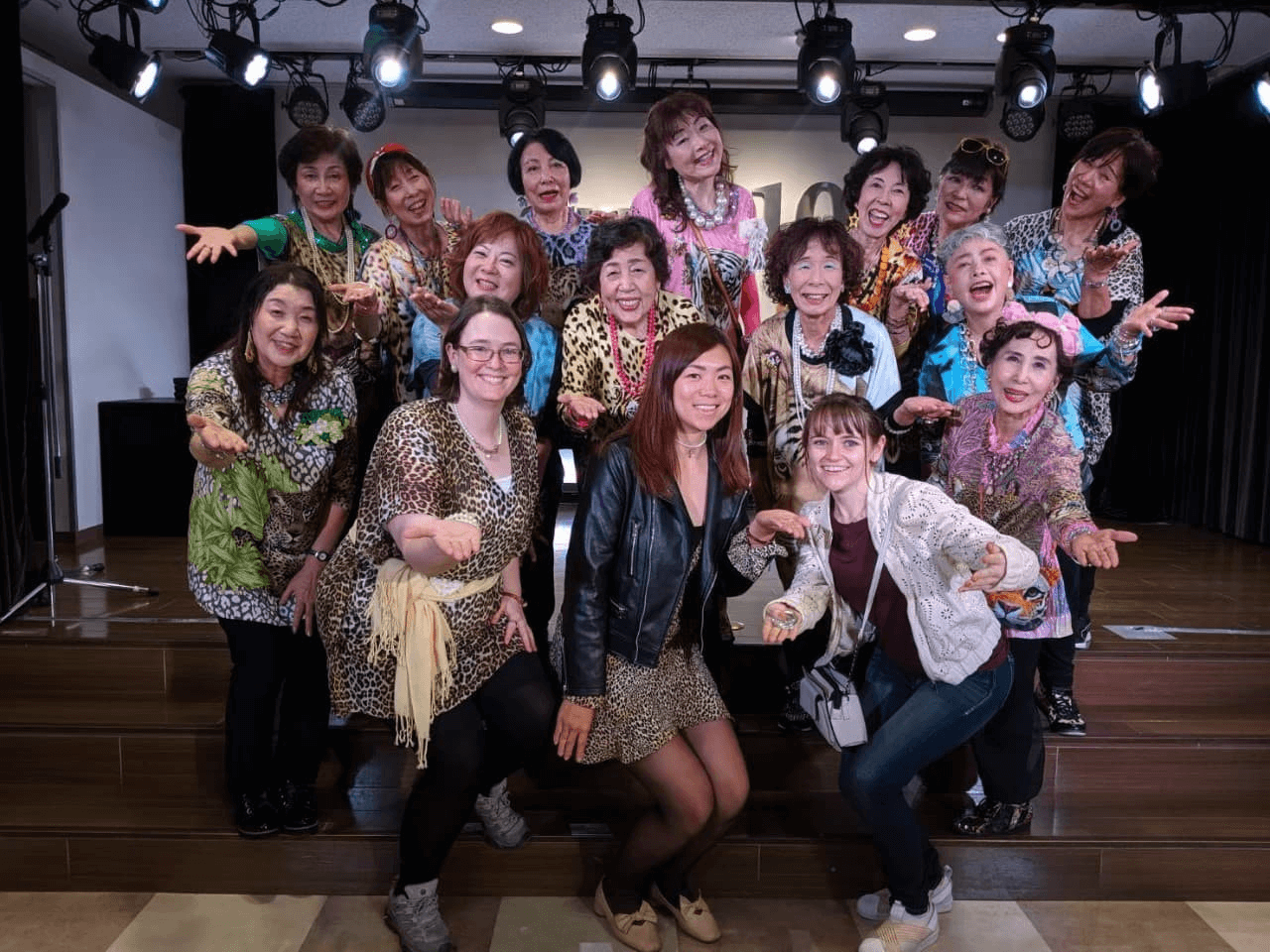 Elderly ladies who rock leopard print, give out free candies, sing, dance and wow the crowds with their flexibility are absolutely worth more than they’re charging. Their songs are catchy, their stage presence is inviting and they’re interactions with the audience are hilarious.

Spend the day at Ikeda!

I’m not sure why this little part of Osaka offers so much under the radar but if you really want all the fun for none of the cost, this is the place to go.

You could easily spend the entire day in Ikeda wandering around and having a variety of fun adventures. The ramen museum can be found here which is free of charge to view and only 400 yen if you’d like to create your own instant noodle pot! 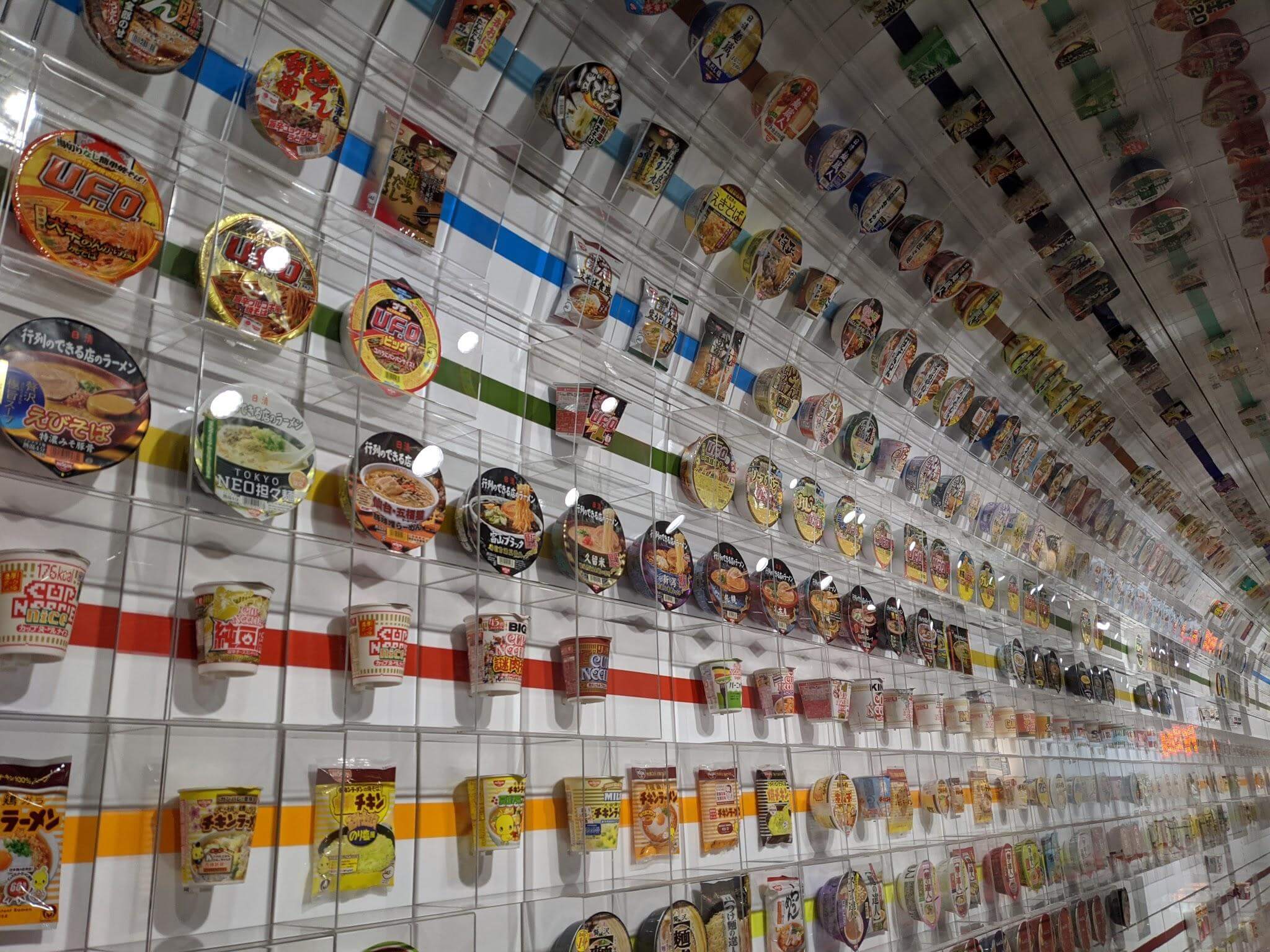 Ikeda castle is small and adorable, free to enter and allows for a beautiful view of the surrounding city. 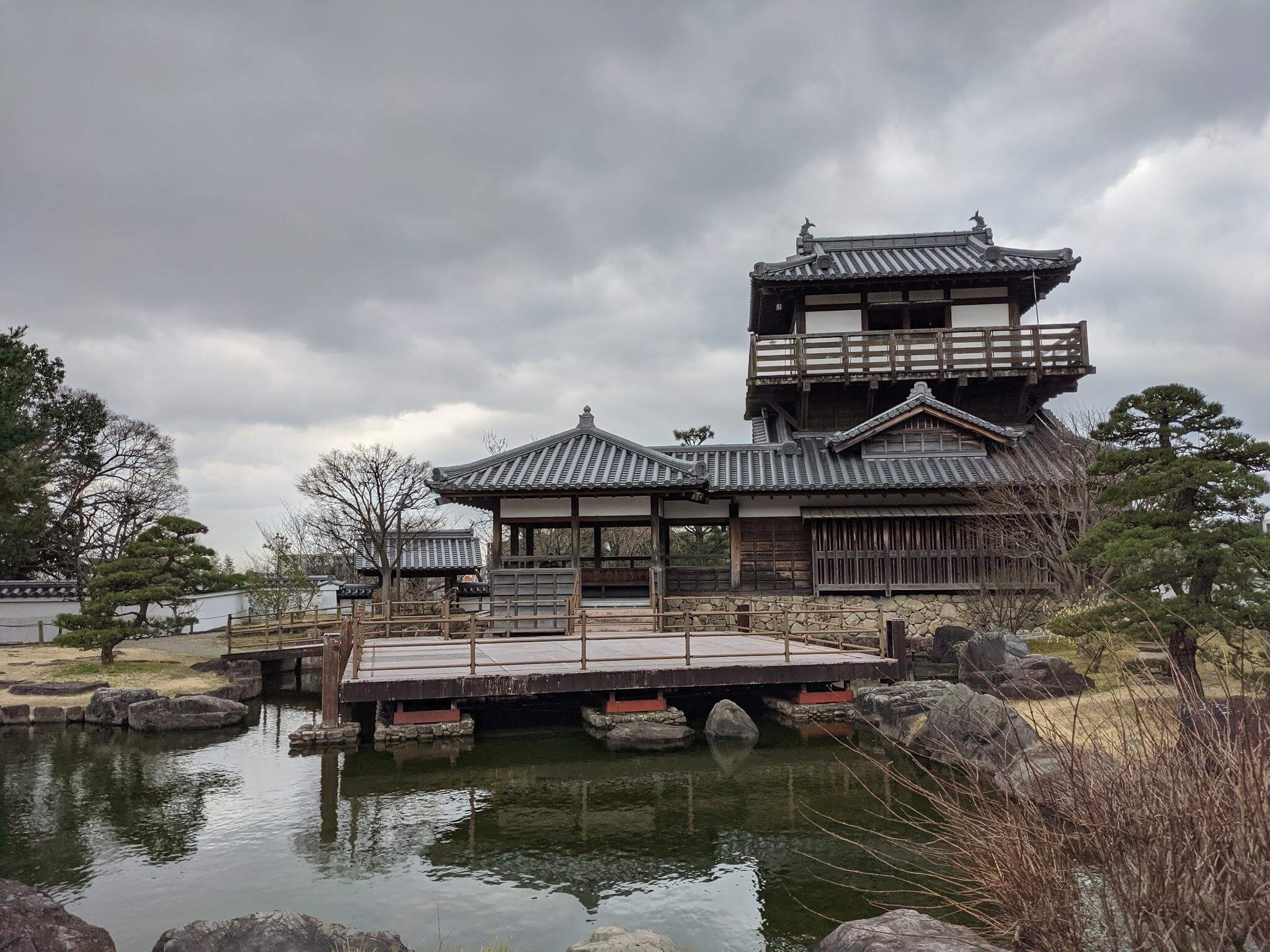 Ikeda’s mascot is the wombat and I don’t know why but as you wander around the town you may notice all the whimsical details, like the wombat statutes displayed everywhere, the wombat styled benches or the wombat manhole covers.

You can even meet a real life wombat in the small FREE zoo, where you can get up close and personal with llamas, rabbits, guinea pigs, ponies and other farm animals! 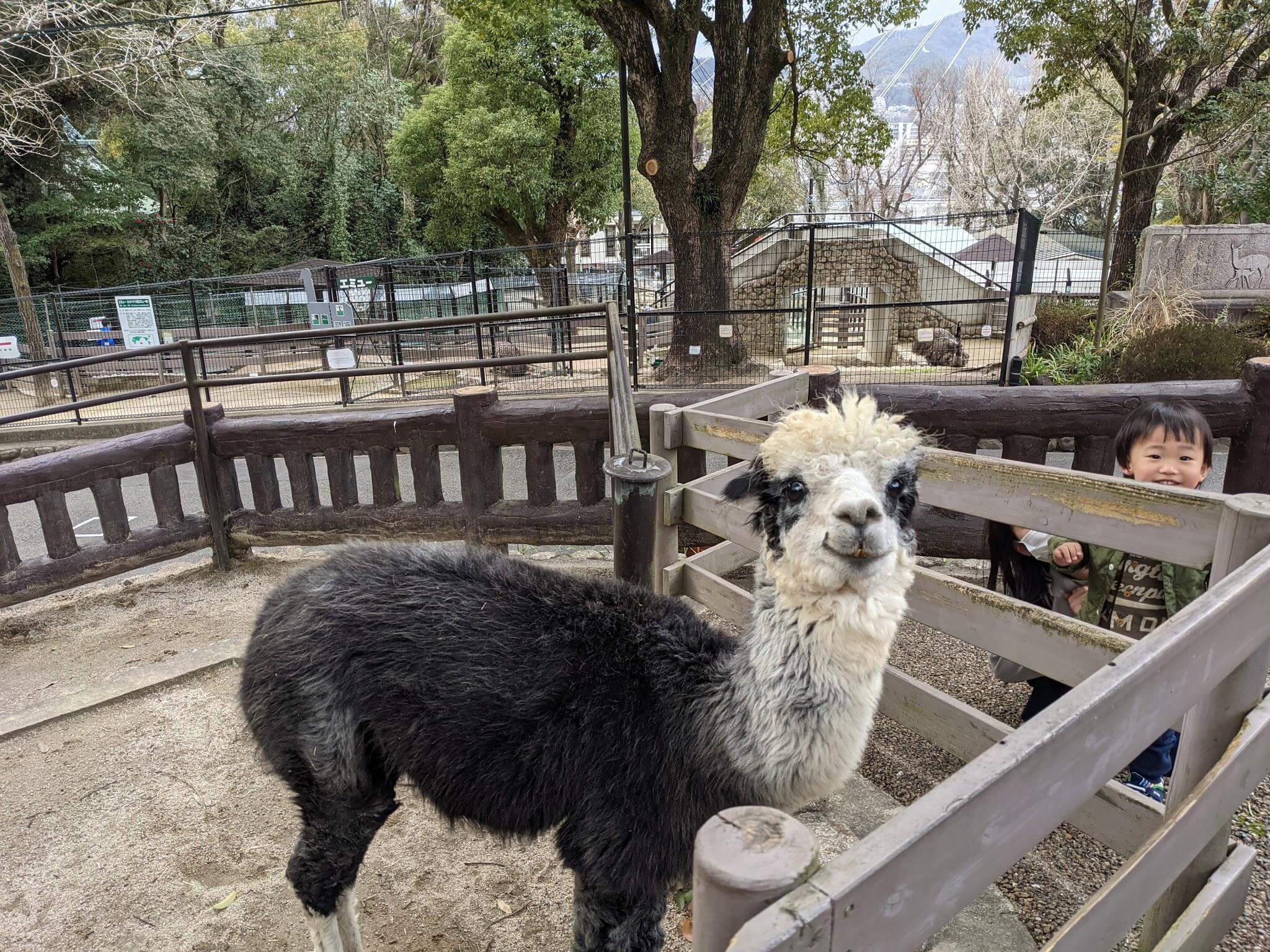 If you happen to be a fan of hiking, want some outside time or enjoy dazzling waterfalls, then Minoo has you covered.  A particularly special place to visit during Autumn but still enjoyable all year round. 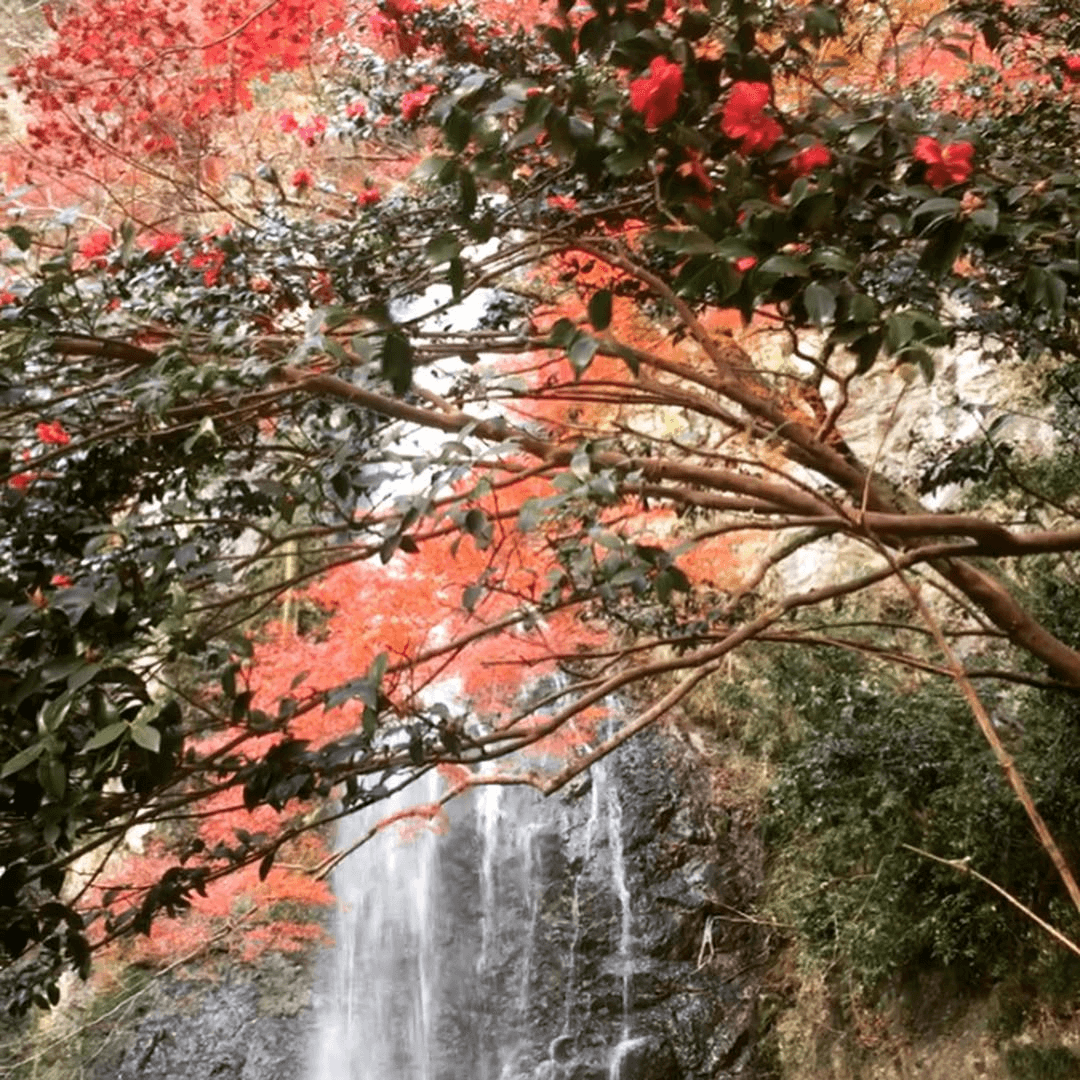 It’s the closest natural recreation area to Osaka city.  The hike itself is not difficult and is about 3 kilometers in length through a forested valley alongside the Minoo river that eventually ends at the large waterfall.  You may even see monkeys swing by as you stroll through the trees.

If you’re looking for free things to do in Osaka, you are in luck! These 10 things are only the beginning, there are a lot more options to be found in neighboring cities like Nara, Kyoto, Kobe and Wakayama. You’ll wonder why you ever spent money on doing things.