by KatC
in Japanese Culture
Reading Time: 9 mins read
A A
0
Share on FacebookShare on TwitterPin this articleShare on LINE

The Japanese are famously known for their creative storytelling with Japanese anime having a worldwide following and some of the most dedicated fans on the planet. They’ve also earned a quirkier reputation as an entire country with many people fascinated by their unusual gameshows, robot obsession, Godzilla antics, unique ahem* adult entertainment and their interesting take on horror as a genre.

Learning some of the more unusual traditions, beliefs and superstitions is one of the most interesting parts about living here.  During my time, I’ve learned some truly spectacular, intriguing and downright chilling urban legends and practiced traditions that I’m excited to share. Here are the most unusual tales that I’ve discovered.

The story of Peko-chan milky girl

You’ll definitely see her cute little face around should you visit Japan. She’s the epitome of an adorable little girl with her pigtails, red cheeks and wide hopeful eyes. An ideal look to accompany the sweet sweet candy, Milky is selling.

The slogan of milky candy is ‘milky tastes like Mom’ obviously a tribute to the warm comforting nature of a mother’s love. . . right? Unfortunately not. The origin of Peko-chan, that sugar driven happy little girl, actually reads that living in a single parent home during war times, peko-chan and her mother had become poverty stricken.

This left them both desperately hungry. Without any food left, Peko’s mother’s love couldn’t bear to see her only child suffer any longer and so she chopped off her own arm to feed it to her daughter. After having starved for far too long, it wasn’t enough to satiate Peko and she lost control, attacked and continued to devour her only parent.

Not necessarily the cute origin story we all would have assumed would accompany a box of sweet treats but honestly since learning this story, I do get a slightly cynical delight from eating the candy.

I once visited a temple in Kobe before and paused to have a childish snigger when I noticed the large eggplant (emoji style) statue sitting among the shrines but since learning this story, I now know, it symbolises something different than I had suspected.

Tokugawa Leyasu was the first leader of the Tokugawa Shogunate of Japan, which led Japan from 1600 to 1868.  Supposedly it was well known that Tokugawa was a particular fan of Mt. Fuji, Hawks and eggplants. 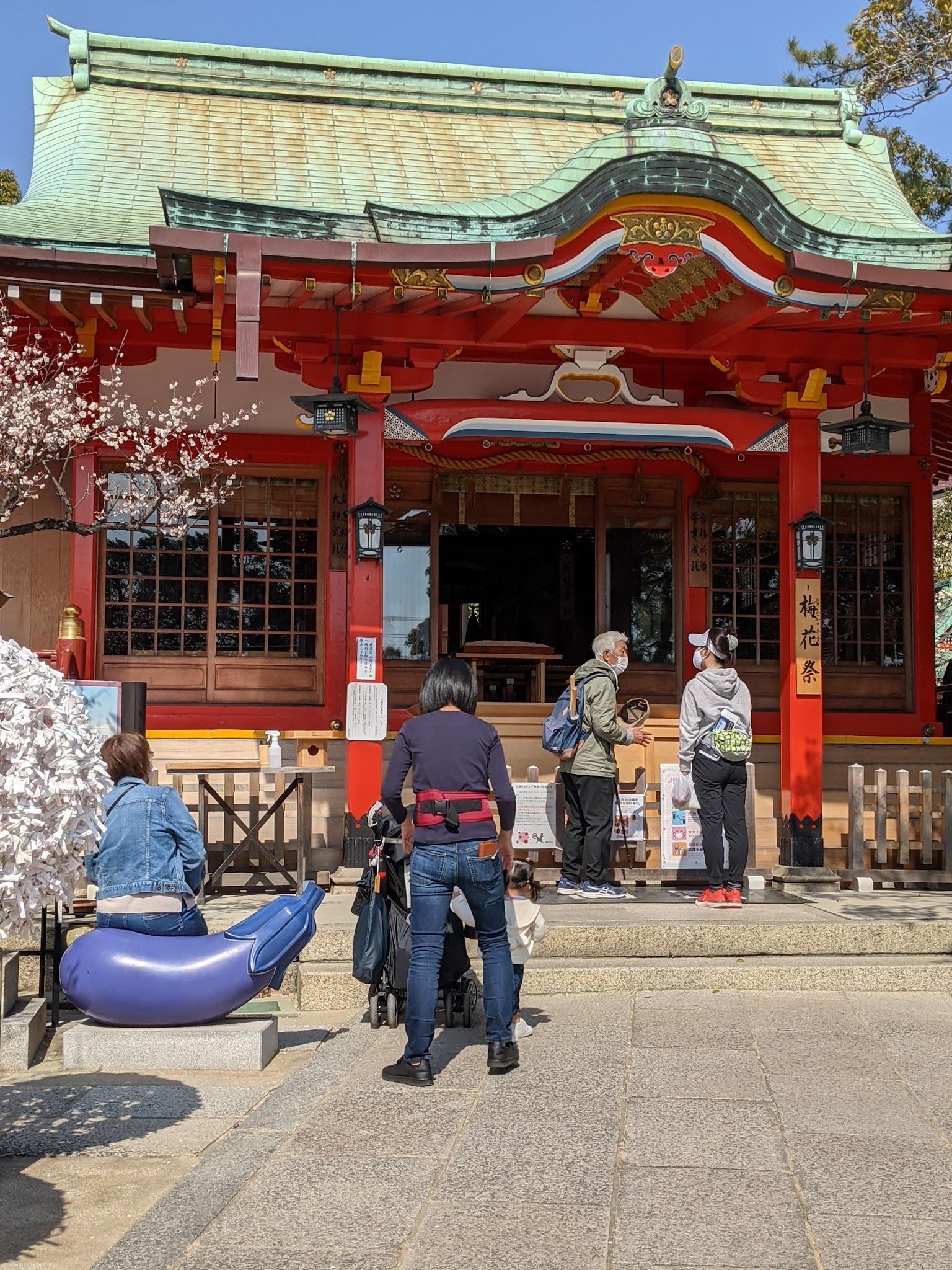 It’s a bit of a random list and the order of the list is also of great value apparently. There is a superstition among the Japanese, that if one was to see Mt. Fuji, a hawk and then an eggplant in their dream, on the first night of the year, then they’re sure to have a fortuitous year.

There is a bit more logic involved in the superstition than simply an ode to the favorite things of a previous ruler. The translations for each word have double meaning

Mt. Fuji can loosely transition into the kanji for safety or ‘no death’, eagle translates to ‘high’ and eggplant can transition to ‘achievements’, I was definitely going a different route with that symbolism.

How many people have actually experienced said dream? I’m not sure but I know it’s something I’ll be keeping my fingers crossed for in the future.

Okay so Japanese horror has always had a special place in my heart so how can I not talk about my favorite scary legend.  The legend of Kuchisake-onna, a young girl who lived with her mouth slit from ear to ear. Similar to the joker, there’s many reasons and stories behind how she ended up like this. One states, it occurred at a dentist’s office when she was unable to sit still during a procedure, another tells the tale of a scorned lover seeking revenge and my personal favorite, a jealous female who wanted to remove Kuchisake’s natural beauty.

According to legend, after her death, a vengeful spirit returned who wanders around streets with a masked face, particularly hard to spot given the current circumstances but perhaps the blade she carries with her might give her away. Apparently, she’s fond of preying on children and regularly stops to ask them “Watashi wa, kirei?” meaning, ‘Am I pretty?’ and if they answer no, they die.  If they answer yes, she removes her mask and asks ‘kore demo?’ meaning ‘even like this?’ and if they answer no, they die. They’re not safe if they answer ‘Yes’ though as she will then make them pretty like her by slicing their mouths too.

Supposedly, there are  a few ways in which you can outsmart the spirit though and that is by responding with either ‘You are average’ or by asking the same question back “Watashi wa, kirei?” This leaves her confused, giving you enough time to run away.

Risking your life for luck at Kiyomizudera Temple

One of the most beautiful temples to visit in Kyoto and particularly awe striking during Autumn is Kiyomizudera temple. The temple is also buried in beliefs and practices said to bring luck and love. The most bizarre to me and one that is no longer allowed to be practiced is the concept of jumping off the stage area to make a wish. Apparently during the Edo period, many people jumped from the stage, risking death because if they survived their wish would surely come true.

To be fair, the survival rate is said to have been at 80% but unfortunately it is impossible to find statistics on how many wishes came true. This particular practice did lead to a very popular metaphor among the Japanese, “Jump off from the stage of Kiyomizu”, which is used quite often as people take risks in their lives, like quitting a job or getting married.

First, the facts; every year, late in June, in Tokyo, a competition is held where two large sumo wrestlers hold two babies in the air with the sole purpose of making them cry. The first baby to cry is the proclaimed winner because that baby is believed to have released all it’s demons. If, however, neither baby cries, a demon masked person will jump up on the stage to finish the job.

Sounds cruel, right? For Japanese parents, it’s actually considered a privilege and people cue for hours hoping to see their baby cry. They also pay, what I consider a hefty price for the given situation, at JPY15,000 or about USD130.

It’s been a practiced tradition for hundreds of years and the idea is based on the popular Japanese expression ‘crying babies grow faster’. They also believe that the louder the cry the more blessed they shall be.

Why it’s sumo wrestlers? I can’t be sure. The name of the festival is ‘Nakizumo’ which means ‘sumo of tears’ but finding details on the origin has proved pretty difficult.

There are hundreds of peculiar traditions and myths in Japanese culture but I’d probably need the width of a few books to get through them all. These 5 are simply my favorites that I’ve learned while living here and if you’re really intrigued to discover more, book that plane ticket and see what you can find out too.