by KatC
in Japanese Culture, Living In Japan
Reading Time: 8 mins read
A A
0
Share on FacebookShare on Twitter

Japan is its own world with its own set of values, priorities and therefore rules. The conformed culture leaves tourists visiting the bigger cities, quick to notice the repetitive nature of clothing worn within the Japanese population. Salary men everywhere wearing almost the exact same outfit, modest business ladies neatly presented without a single crease and of course, the slightly varying shades of brunette hairstyles throughout the crowd.

Do not get me wrong, Japanese fashion has influenced some of the most eccentric and creative styles out there but because of the ‘blending in’ culture, there is a strong value placed on conformity, here are some codes for certain situations you may want to be aware of, when visiting or moving to Japan.

Let’s start with the basics. For this category, I’m not sure ‘code’ is the right word because you are still entitled to dress how you like but you will be leaving yourself subject to extra staring and a sense of shame in the air surrounding you.

Tattoos, piercings or coloured hair are not as common as in many other countries. Tattoos are famously known to be associated with the Yakuza, the Japanese type of mafia and are therefore often not allowed in many establishments, especially nightclubs, swimming areas and onsen. As for the other eccentricities, it’s just that desire to never be a nail sticking out in the culture that prevents that style from being common amongst the Japanese.

With women, wearing short shorts or skirts and I mean the shortest of shorts is completely fine but wearing anything with spaghetti straps or a revealing chest area is considered especially inappropriate. Tank tops are seen as underwear here so be sure to cover up if you want to blend in.

One thing I really miss from home, although after being here for years I eventually learned to accept the ridicule, is the idea that workout clothes are not just for working out. Obviously, Japan has a winning argument here but some days the concept of jeans or any sort of restricted clothing is overshined by the desire for comfort. Unfortunately, wearing tracksuit bottoms or leggings outside of the gym isn’t the norm here and is seen as a mark of laziness.

Along with many other Asian countries, the Japanese considers the outside world to be, well, dirty and therefore don’t like the shoes worn outside to be brought inside, so often business’, restaurants, temples and any accommodation will insist you remove your shoes before you enter, so make sure you have good quality socks prepared for your trip. They also find bathroom floors extra unclean so you’ll often see a change of footwear presented at the entrance of public bathrooms too..

Although Japan is famous for their colourful, interesting and unique sense of fashion originating from the animated street of Harajuku, you will struggle to find any splash of colour in the streets during the regular work week.

True to the ‘blend in’ ideals of the culture, Japanese business attire insists on dark shades only, with a neutral shirt and tie. For women, skirts are more appropriate but must not be too short nor too tight and pumps are okay but there is a small value in a low heel. Belts must match the shade of footwear being worn which leaves only two options, black or brown and don’t forget those fresh, clean and holeless socks!

Everything must be neat from head to toe, including hair and minimal make up. For men jackets/blazers can remain open but for women, buttoned is more acceptable. Any fragrances used must not be strong and all jewellery must be simple or better yet, not worn at all.

Hair must be neat and a dark shade. There are, in fact, palettes distributed to students as they leave university demonstrating the only acceptable shades of brown and black for hair in the workplace even if this means dying natural colour. There are exceptions made for foreigners but it’s still worth noting.

Men are fairly safe in a neat suit, preferably black or grey but for women finding a modest yet stylish dress may be a little more tricky, particularly if you’re shopping in a Western country.

Of course, no white coloured dresses but black is actually okay. Don’t forget to cover those shoulders, that chest, your knees and any tattoos. I’m sure many women reading this know far too well the struggles with shopping for those special occasions, trying to find that perfect outfit that will remain forever in photo albums, so you can imagine the extra struggle trying to find a dress that covers all the taboo areas while also hoping to look nice.

Wedding Traditions in Japan – How Japanese People Get Married

Funerals are of course a sombre event in most countries but Japan sets clear expectations and codes that may not be tampered with. Men may only wear a black suit, white shirt and black tie. Women may only wear black dresses or skirts, again shoulders must be covered and the hem must cover the knee even when seated. No jewellery should be worn except for wedding bands, no fragrances and no shiny fabrics or particularities such as frills and flounces should appear on clothing.

Festivals don’t have a dress code, you can wear casual clothes if you like but if you want to embrace the culture and experience some extra Japanese fashion, you may enjoy wearing some of the traditional clothes.

A famous traditional Japanese garment, it is wrapped in the front, T shaped with square sleeves. These are worn by men, women and children during festivals and also can be worn to weddings and funerals. They are usually an older more expensive clothing made from silk or brocade and have two layers. They usually have at least two colours and come in different seasonal variations.

The kimono must always be worn with left over right as only in death are they worn the opposite way. The kimonos are intended to create a tube shape so if your body fights that shape naturally, padding must be worn to even it out. Colours worn should be seasonal and always wear the obi bow to the back as in the past, an obi facing the front was only worn by ladies working in the red light district.

Yukata are extremely similar to kimonos but are a lot cheaper and usually made from cotton, so mostly worn during the Summer.  They are slightly less formal so can often be bought in a larger variety of colours, designs and styles. You may also notice, while visiting onsen or staying in a ryokan, you will be offered a bathrobe style Yukata to relax in between soaks. 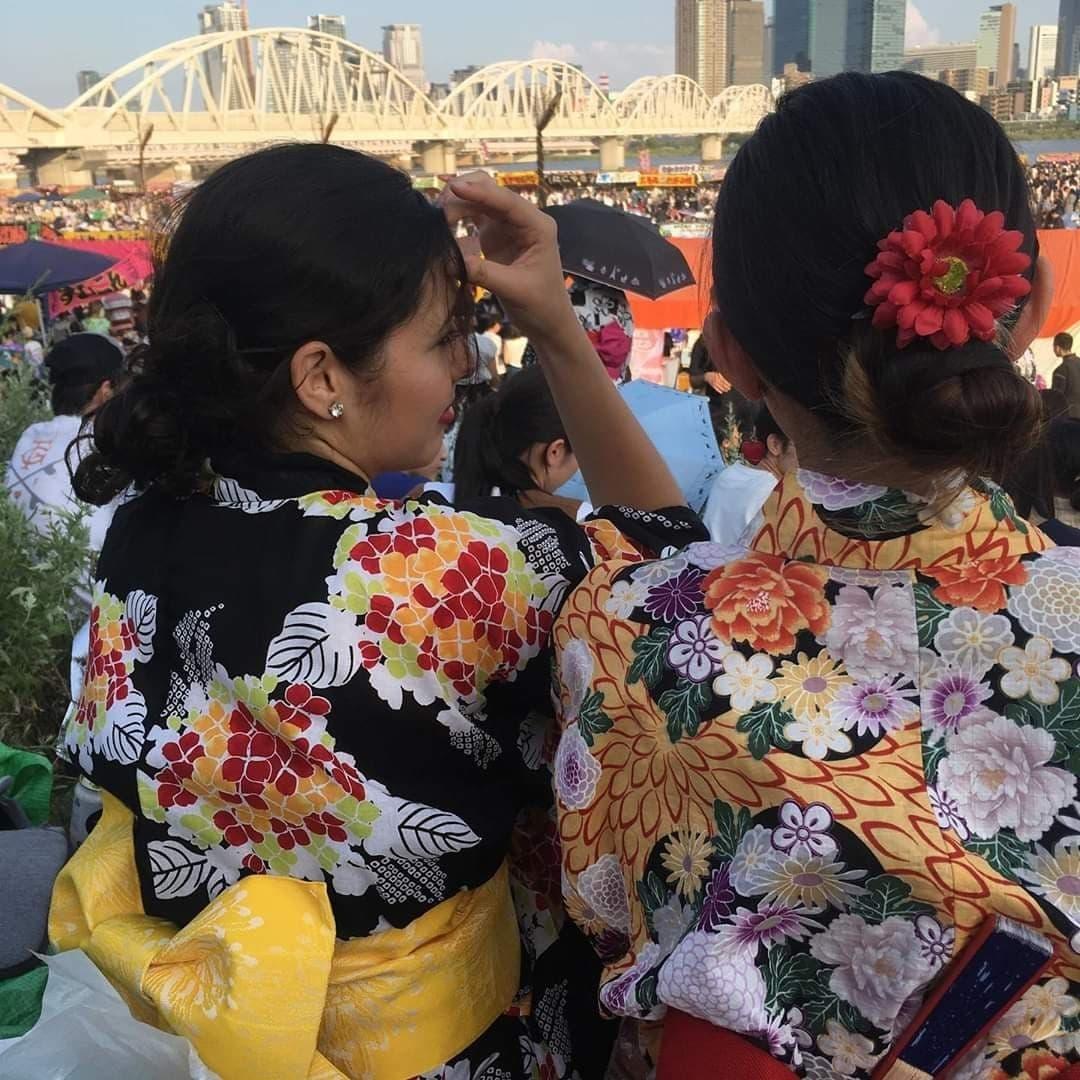 When wearing a kimono or yukata at a cultural event, footwear is also specific. Traditional Japanese sandals known as Zori or Geta should be worn with either garment. Geta are the most unusual to look at as they rest on two raised wooden platforms, originally created to keep clothing away from dirt and come with an excessive click/clack sound as you walk. Zori’s are more Western style with a slightly raised slanted heel in the back

These sandals are usually accompanied by Tabi, which are essentially socks with a divided big toe area to fit neatly around the tong in the sandal. These are only worn by men for formal occasions but usually worn by women when accompanying traditional clothing.

If you’re visiting Japan you can basically wear what you like but if you’d like to embrace and respect the culture as much as possible during your visit, it’s important to take note of the areas you should be covering and the times where your clothes may be causing unnecessary offence.

If you’re looking for work while here, knowing the expectations of your wardrobe will have you starting right and if you want to embrace tradition, knowing how to wear the Japanese style clothing will enhance your experience as well as giving you some fun photos of your trip to admire in the future.