by KatC
in Living In Japan
Reading Time: 7 mins read
A A
0
Share on FacebookShare on TwitterPin this articleShare on LINE

Despite often demonstrating a love for all things supernatural with its eerie contributions to the horror genre and despite inventing cosplay, Halloween is surprisingly relatively new to Japan. Tokyo Disneyland opened in 1983 in Japan and overtime, it demonstrated the wondrous possibilities Halloween could offer and thus the holiday began rapidly increasing in popularity.

Unfortunately for the children, trick or treating has yet to cross over and trying to find a pumpkin for carving is near impossible but as an adult, there is a lot of fun to be had during the spooky season. If you’re a fan of all things Halloween and lucky enough to be in Japan for the holiday, then here are 5 great ways to let your younger self play and embrace the festivity.

Growing up in Ireland, wearing anything out of the ordinary would often invite unwarranted judgemental taunts from the ever terrifying loitering groups of teenagers we all fear walking by so I was absolutely baffled when I moved to Japan and seen many people dressing in bizarre fashions and nobody around was staring, making comments or for some unknown reason, seeming offended.

Often, outside of October, you will see people randomly strolling around in cosplay, loving life and nobody bats an eyelid so when Halloween was introduced, the costume aspect was welcomed with open arms. People go above and beyond with their costumes here and throughout the week of the 31st you will see people celebrating everywhere, any time of day in elaborate and incredibly well designed costumes.

It’s the perfect opportunity to play dress up again, the dress up you wanted to do when you were younger but you didn’t have the money or the YouTube tutorials to play the imaginary role you so desperately wanted to escape into. You don’t have to feel silly or childish because everyone here is being honest about this desire. Adults everywhere engaging in make believe and having a truly fun time is a magical experience to have the chance to be involved in. 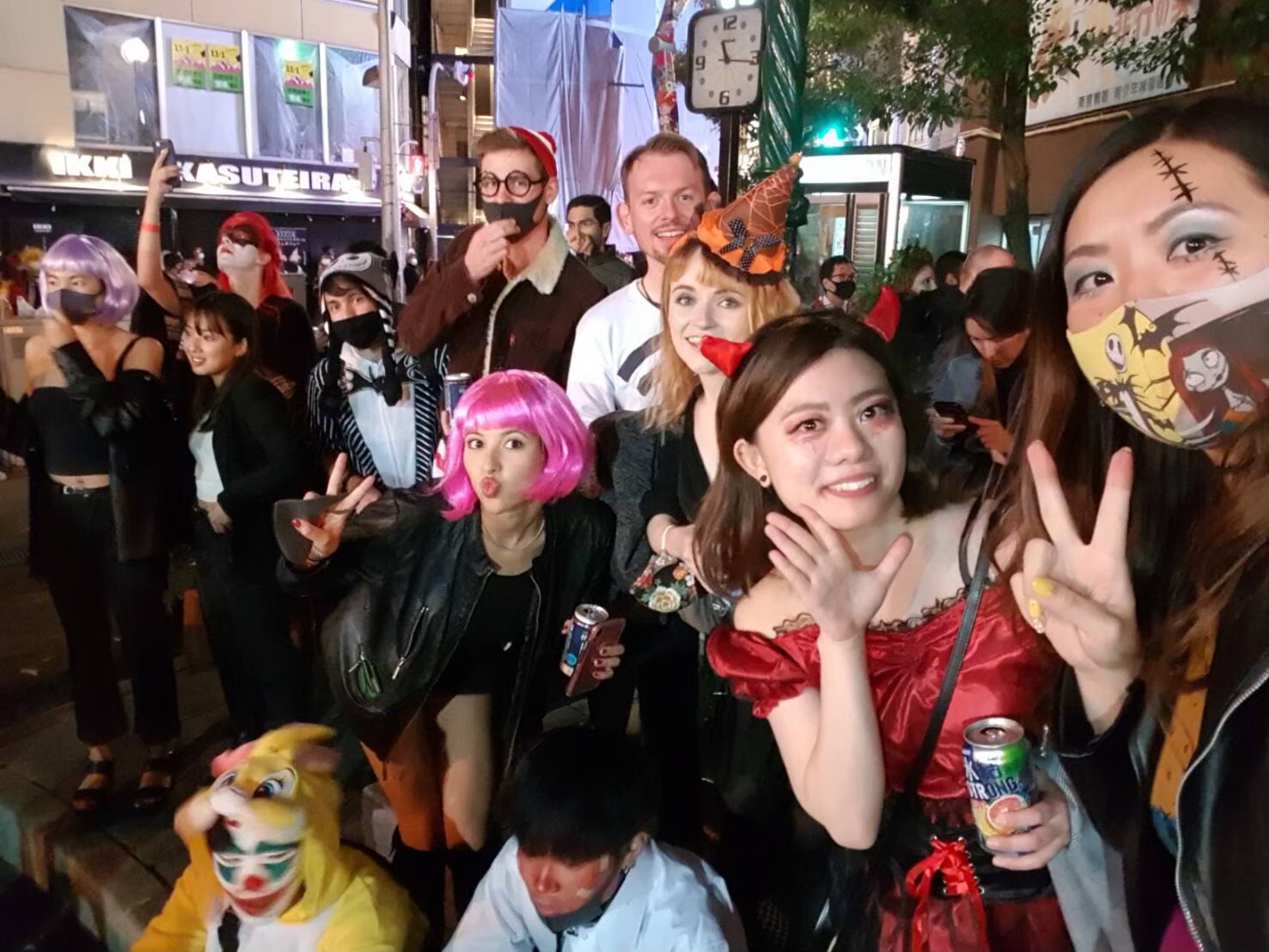 Once you’ve nailed your costume, the best place to go and show it off and enjoy admiring everyone else’s unique ideas is simply the streets. Every Halloween weekend in Japan from Friday night to Monday morning, wherever the city centre is in the area you’re in, becomes flooded with whimsical, scary, as seen on TV and downright silly characters and it’s a party like no other.  Everyone is invited and it’s completely free.

Especially in the Shinjuku area of Tokyo or the Namba area in Osaka. Thousands of people wander around taking photos in costumes, talking to strangers, dancing, skating, drinking, laughing, connecting and just being a bunch of freaks together. It lasts all night long and it’s a truly unique opportunity only available in Japan that you’d be mad to miss out on.

With Disneyland representing in Chiba and USJ going strong from mid September, these theme parks offer another option for catwalking your costume around while providing more Halloween themed activities to enjoy. 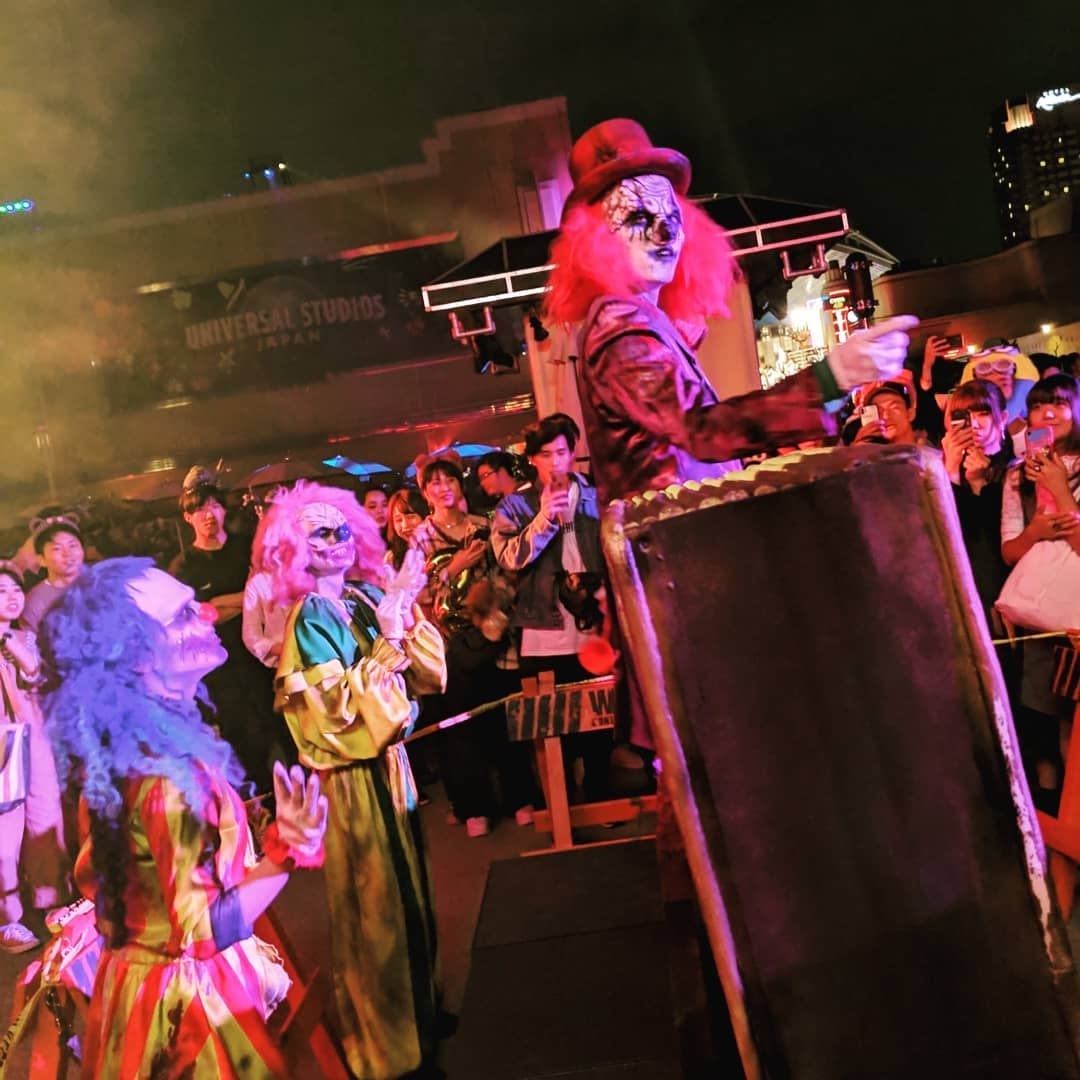 Disneyland and Disney Sea offer plenty of Halloween themed parades, snacks and limited-time spooky merchandise to be enjoyed during the scary season and the incredible decorations provide vital photo opportunities for any Disney/Halloween enthusiast.  Sounds like an odd combo as a personality trait but I know there are millions of us out there.

USJ goes above and beyond though, taking the winning prize home when it comes to celebrating Halloween. Not only does it offer similar experiences as Disneyland but it also hosts a variety of themed haunted houses to explore, including but not limited to, Chucky, The Exorcist, The Conjuring and many more cult classics. Still that’s not enough as wild zombies are also released into the park after 6pm to terrify and entertain you as you simply try to make your way from haunted house to haunted house. The zombies come in many different forms such as pirates, clowns, punk rockers and even, in true Japanese fashion, cute (Kawaii) zombies.

We often shudder at the price of tickets for these kinds of establishments but considering all these extras with no extra charge, it’s the perfect time to visit and get your money’s worth.

If your budget doesn’t stretch as far as a theme park world, don’t worry there are still plenty of other options lurking around every corner to entice your festive spirit. Remember I said Japan only recently acknowledged Halloween? Which was odd because they’re cinema suggests they love a good horror story or atmosphere. They do, which is why it’s available all year around.

Trust me, no matter where you are, there’s something spooky nearby. Firstly there’s any amount of steam punk styled bars that can often look like they were taken directly from a Rob Zombie movie.

Secondly, there are numerous themed cafes to be found such as the chain prison themed restaurant, ‘The lock-up’ where you’ll get to experience unusual culinary creations while criminals escape around you, the Kawaii Monster Cafe in Tokyo, which is basically exactly what you’d expect from the name and the Vampire cafe in Tokyo for more of an elegant horror experience.

On top of that, there are many old ghost stories surrounding many temples and shrines that can be quite eerie to visit.  There are hiking trails that involve dark deep dives in abandoned railway tunnels and even an entire onsen town known for its hellish dark smoke clouds and accompanying devil statues.

And, of course, enjoy some seasonal foods 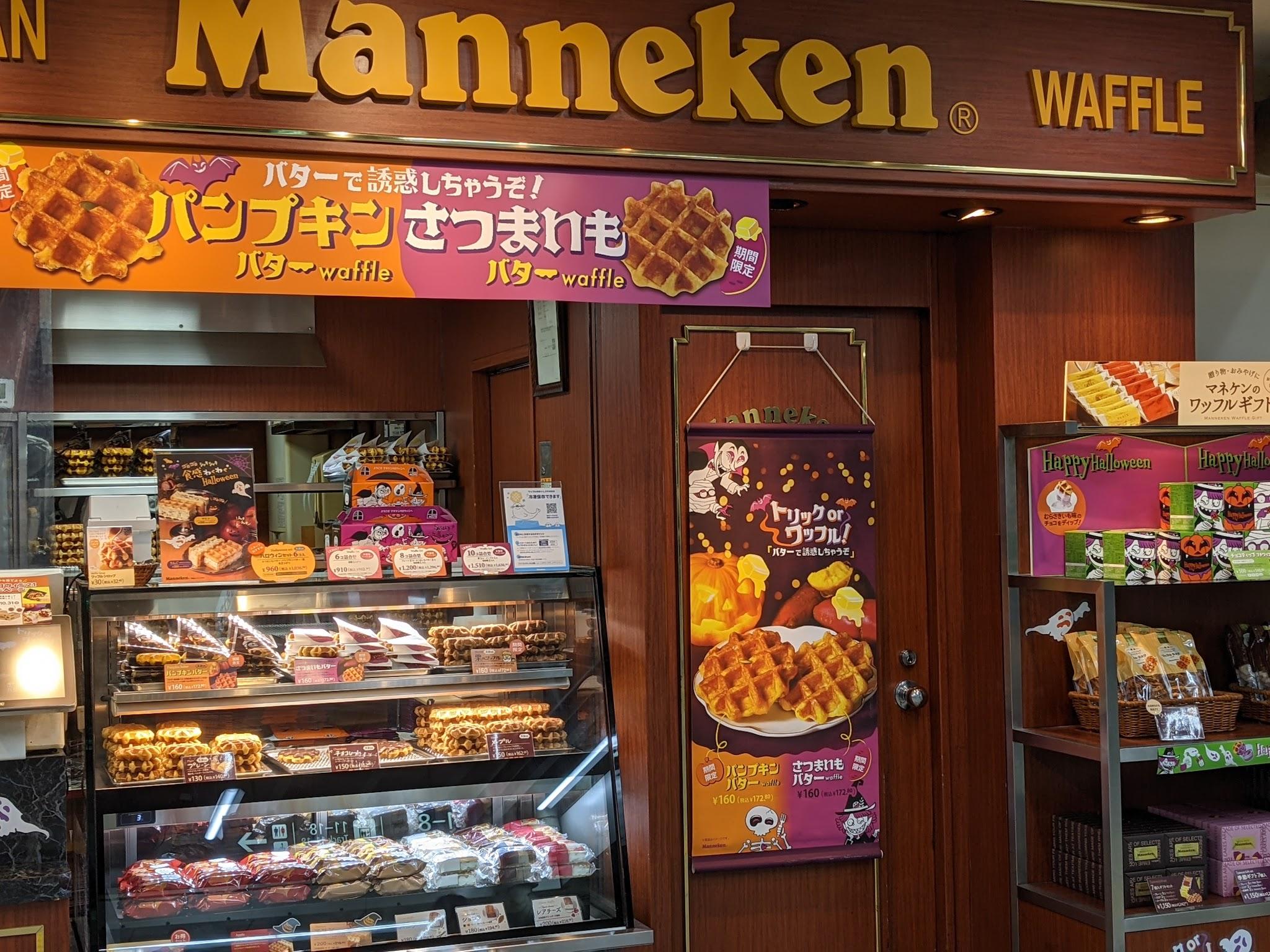 When there’s a flavor in season, Japan goes big. Be prepared to have pumpkin or sweet potato flavoured alternatives for all foods you enjoy including but not limited to, chocolate, potato chips, soups, biscuits, . . . . keep reading it gets stranger. . . .  french fries, icecream, cakes, waffles, donuts . . .still normal I know, hold on. . . . nikuman, rice balls, fried chicken, milk, jelly, soda, chewing gum, any baked item and I even saw a pumpkin spice spray cleaner.

Shockingly though, in my 5 years, pumpkin spice starbucks has only hit the shelves this year and I was breaking down their doors when it did.

If you’re as basic as I am when it comes to those October flavours then Japan is definitely the place for you this Halloween.

Conclusion –  How to celebrate Halloween in Japan

All of this to enjoy and it’s also worth mentioning that the incredible Japanese hyaku yen stores (think dollar stores), sell the cutest halloween decorations that money can buy, so it’s a great place to find those perfect little ‘where did you get that?’ souvenirs for your home.

If you’re worried about skipping Halloween by visiting Japan during October, you’re actually doing the opposite, despite it being a new holiday to the country. It is, in my opinion and as a person from Ireland where Halloween began and therefore having more credibility in said opinion, one of the best countries to celebrate the scary season. The fact that it took so long to reach Japan is shocking, considering the culture was clearly always Halloween ready.

A Guide to Kurashiki – A Hidden Gem in Okayama Prefecture