9 things to do and see in the Kansai Region

by Alex Coles
in Japan Travel
Reading Time: 9 mins read
A A
0
Share on FacebookShare on Twitter

The Kansai region is a vast area is made up Osaka, Kyoto, Hyogo, Nara, Wakayama and Mie Prefectures in Western Japan. The region has so much on offer that it can be difficult to pick a few. Here are some of the best things to see and do in Kansai.

Known for its bright lights and lively streets, the Dotonbori district is among the most famous areas of Osaka and a must-visit if you are coming to Kansai. The area has been a designated entertainment district since as far back as 1662, when a local businessman decided to widen the banks of the Dotonbori River in the hope of increasing business and opportunities. Within 50 years the area expanded greatly in popularity. Today, the area continues to live up to its reputation for food, entertainment, shopping and nightlife. 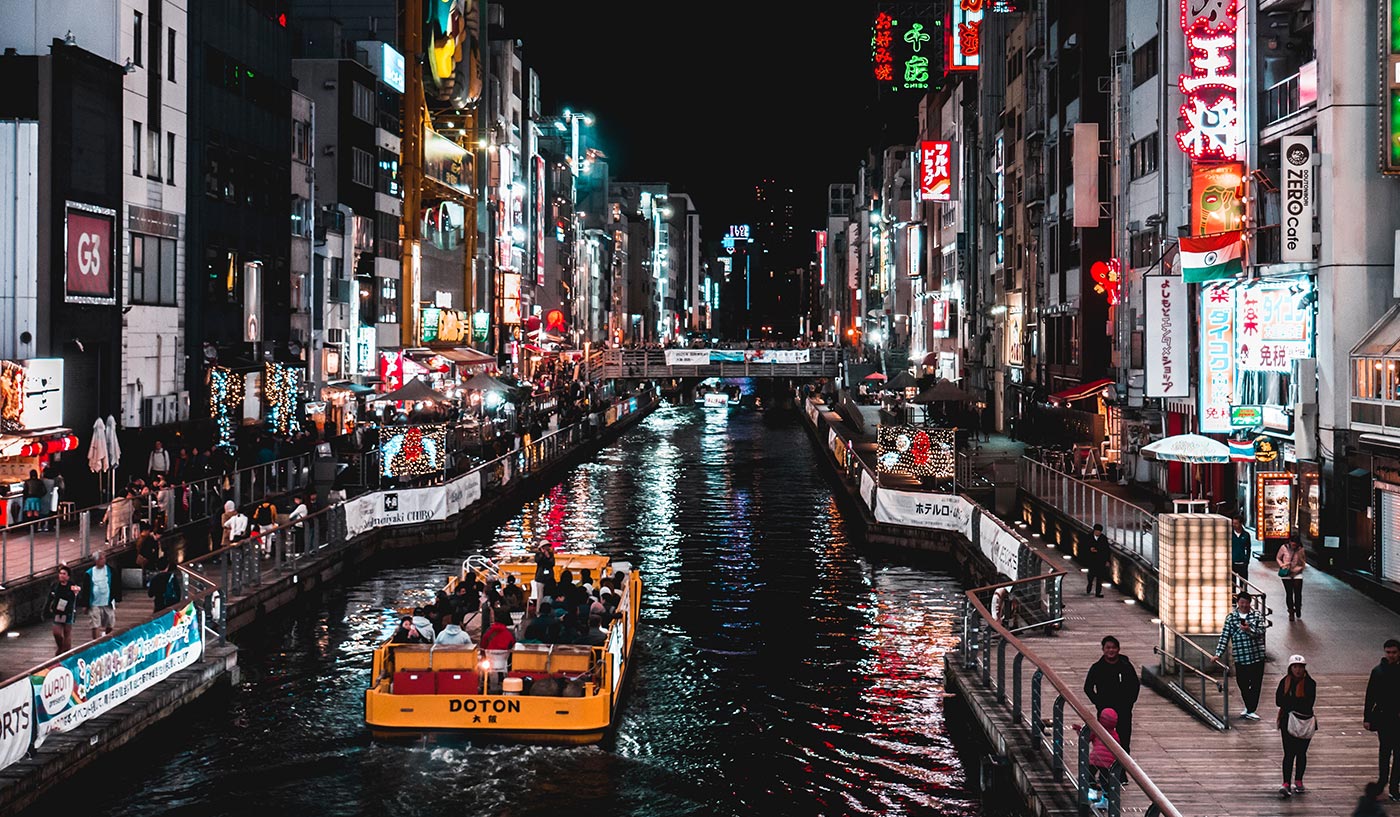 Dotonbori is famous for its food, with almost every specially available here. On the street, you will be hard not to spot many of the Takoyaki stalls dotted around the area. Takoyaki is octopus balls covered in fried batter and a popular Osaka street food snack, a must-try if you visit Osaka.

Among the sights here are Ebisu Bridge, which is best experienced at night, showing the illuminated signs along the river. By far the most famous of these is the Glico runner man, a landmark of the city and a popular meeting spot. The area’s connection to food can be well evidenced with many other eye-catching signs such as the giant iconic arm-waving crab and is a way to draw in the tourists.

Himeji Castle in Himeji, Hyogo prefecture is one of the most iconic castles in Japan, widely considered to be the most spectacular. The castle is a national treasure and a world heritage site. 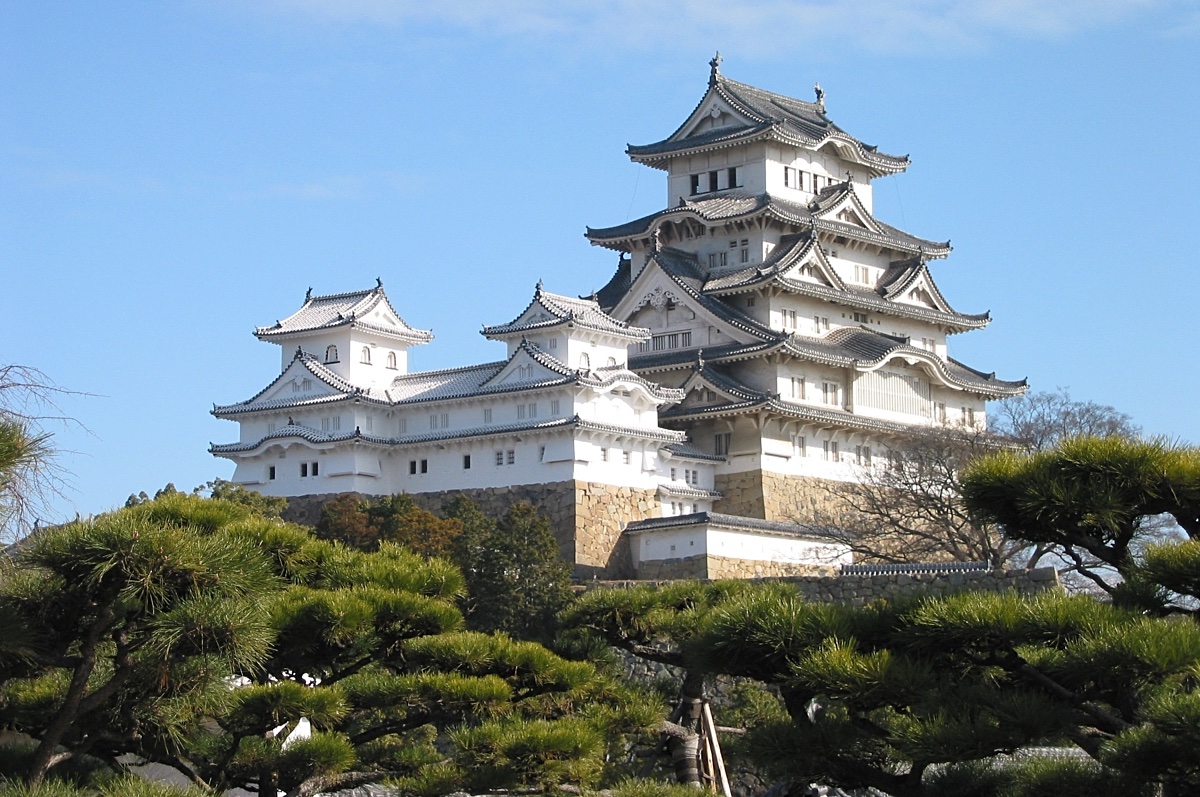 Unlike other castles in Japan, it has remained intact for over 400 years, surviving war, earthquakes and fire and is the among the best-preserved castles in Japan. The castle underwent extensive renovation over several years before reopening in 2015.

Himeji Castle is particularly popular during the sakura season, where over 1000 trees can be found in the grounds. Although it can be very beautiful to see, it can also get very busy with many tourists but is well worth the visit.

Situated only 25 mins by train from central Osaka, Minoh is home to Minoh Park, a beautiful forest park. During the autumn months, it is one of the best places to see the autumn leaves in a natural setting. The park is also home to many monkeys that love stealing food from tourists!

The park’s trail starts outside Minoh station for about 3 km uphill, leading to Minoh waterfall and is the park’s main attraction. It often gets very busy during the autumn, where you will see many stalls selling momiji tempura, which are maple leaves fried in batter. The hike takes around 40 mins to the top, with the first part passing many small shops and is perfect for a leisurely stroll, away from the urban sprawl of central Osaka.

Although Minoh may not be as well known as some of the other places on this list, it is definitely worth a visit. The hike is not difficult or too steep, with the route clearly signposted throughout.

To get to Minoh from Osaka take the Hanyku Takarazuka line to Ishibashi then change for the Minoh branch line.

Arashiyama is a charming picturesque district on the western edge of Kyoto. The area has been a popular destination since as far back as the Heian Period (794-1185) where nobles would come to enjoy the natural setting. 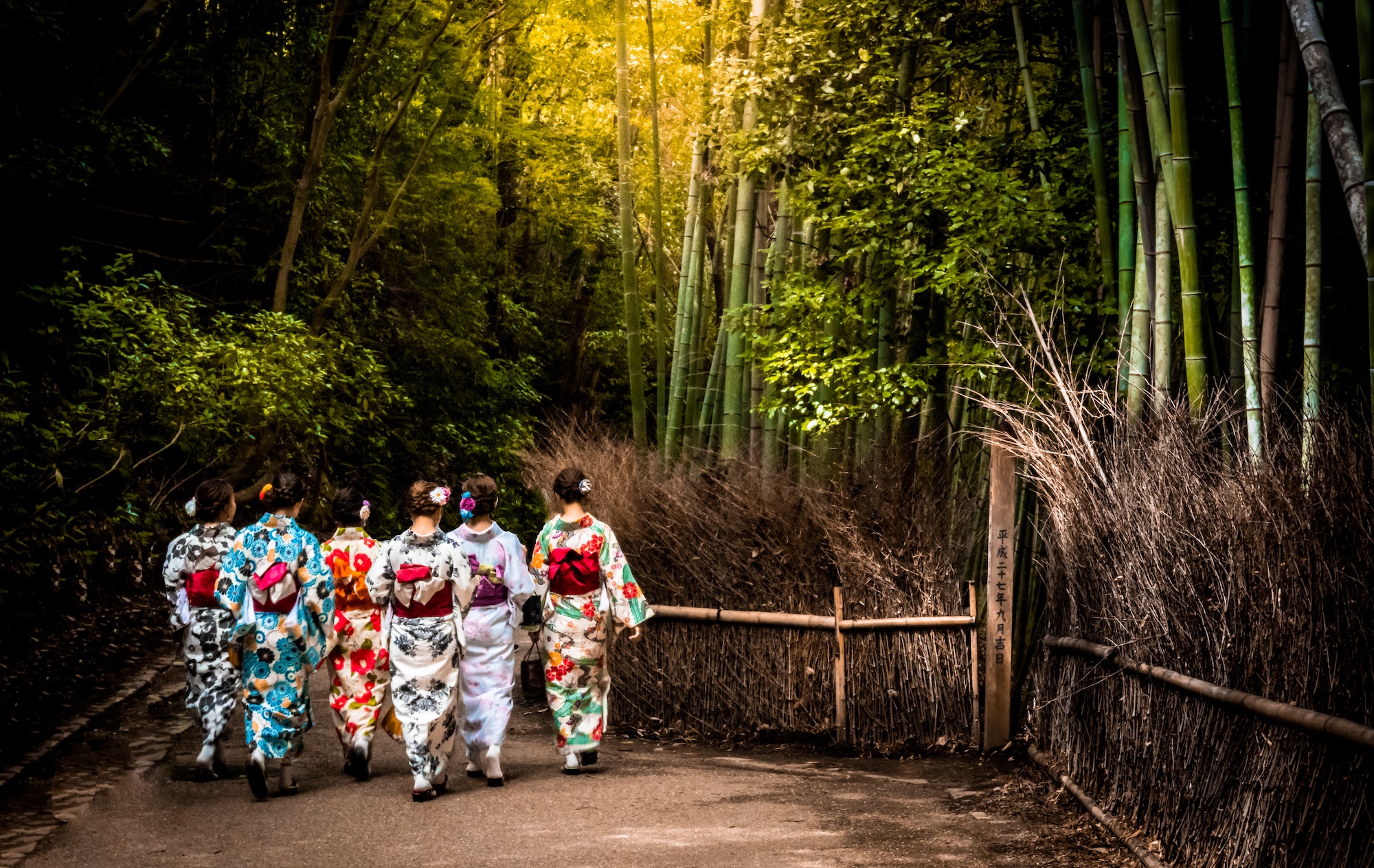 The most well-known landmark in Arashiyama is Togetsukyo Bridge, with many souvenir shops and restaurants and other attractions located nearby, including Arashiyama’s famous bamboo groves. Walking through the bamboo groves can feel like you’re in a totally different place that is so mystical and enchanting. When there is a light wind it is particularly attractive, as the tall bamboo stalks sway back and forth.

A popular way to get around in Arashiyama is by rental bicycle which is available for 1000 yen. Cycling around the area is an enjoyable way to explore Arashiyama. It is particularly beautiful to visit during the autumn seasons and spring seasons, when the trees are golden brown and the sakura colours peak.

If you like onsens, Kinosaki Onsen is the perfect place to visit. Situated in the northern part of Hyogo, this pleasant little town is one of the top onsen resorts in Kansai. The whole area has a charming village feel to it, a world away from the hustle and bustle of urban city life.

Onsen hot springs were discovered in Kinosaki around the 8th century, since then it has developed into this popular onsen resort town. During the evenings many guests staying in the ryokans like to stroll around in yukata and geta, (traditional wooden clogs), looking in the many shops, as well as playing some vintage games in nostalgic arcades. The many people wondering the streets gives the area a lively feel.

Kinosaki Onsen can be accessed direct from Osaka by JR limited express trains and takes 2.5 hours.

The Inner Shrine is the most popular building in the complex, dating as far back as the 4th century. The shrine is dedicated to the Sun god Amaterasu, the most important god in the Shinto religion. The shrine is popular all year round but is particularly popular during the new year, where many Japanese traditionally visit shrines to pray for good luck for the coming year.

Apart from the shrines, the area is an interesting place to explore with many small shops selling souvenirs and craftwork, especially on the street known as Oharaimachi. You can visit as Ise as a day trip but staying overnight allows more opportunity to explore the area.

To get to Ise from Osaka take the Kintetsu limited express train from Uehommachi, Namba or Tsuruhashi. There are 2 trains per hour and the journey takes under 2 hours.

Kiyomizudera is one of the most iconic and famous shrines in Kyoto, making it one of the region’s must-see attractions. The temple was founded in 778 on the site of the Otowa Waterfall in the east of Kyoto. Its name derives from the waterfall’s pure waters (Kiyomizudera meaning pure water temple). In 1994 the temple was added to the list of UNESCO world heritage sites.

Kiyomizudera is best known for its wooden stage, which sticks out from the main hall, 13 metres above the hillside. The stage offers visitors spectacular views of the many sakura trees as well as the lovely golden brown autumn leaves and the Kyoto skyline in the distance. A great time to visit is during the annual Hanatoro festival, where you will be able to see spectacular evening illuminations of the temple.

At nearly 1000 metres, Mount Rokko is the highest peak in the mountain range, providing a spectacular and breathtaking backdrop to downtown Kobe and a symbol of the city.  Visitors can take a cable car to the top of Mount Rokko where you can access an observation platform, offering unparalleled panoramic views over Kobe and Osaka.  The view is particularly impressive during sunrise and sunset.

A few small tourist attractions can also be found around Mount Rokko including a botanical garden, a musical box museum and a garden terrace, as well as a tourist complex with souvenir shops and restaurants. There is also a ropeway connecting Mount Rokko with Arima Onsen, a popular onsen resort, north of Mount Rokko.

To get to Mount Rokko from Sannomiya take the Hankyu train Rokko station then transfer to bus number 16  to the base station of the cable-car.

As Japan’s first capital, Nara is a city with a rich history and culture. Among the main attractions here is Nara Park, which houses many important attractions including Todaiji Temple, a UNESCO world heritage site. The park is also home to several hundred deer, which roam freely around the park. 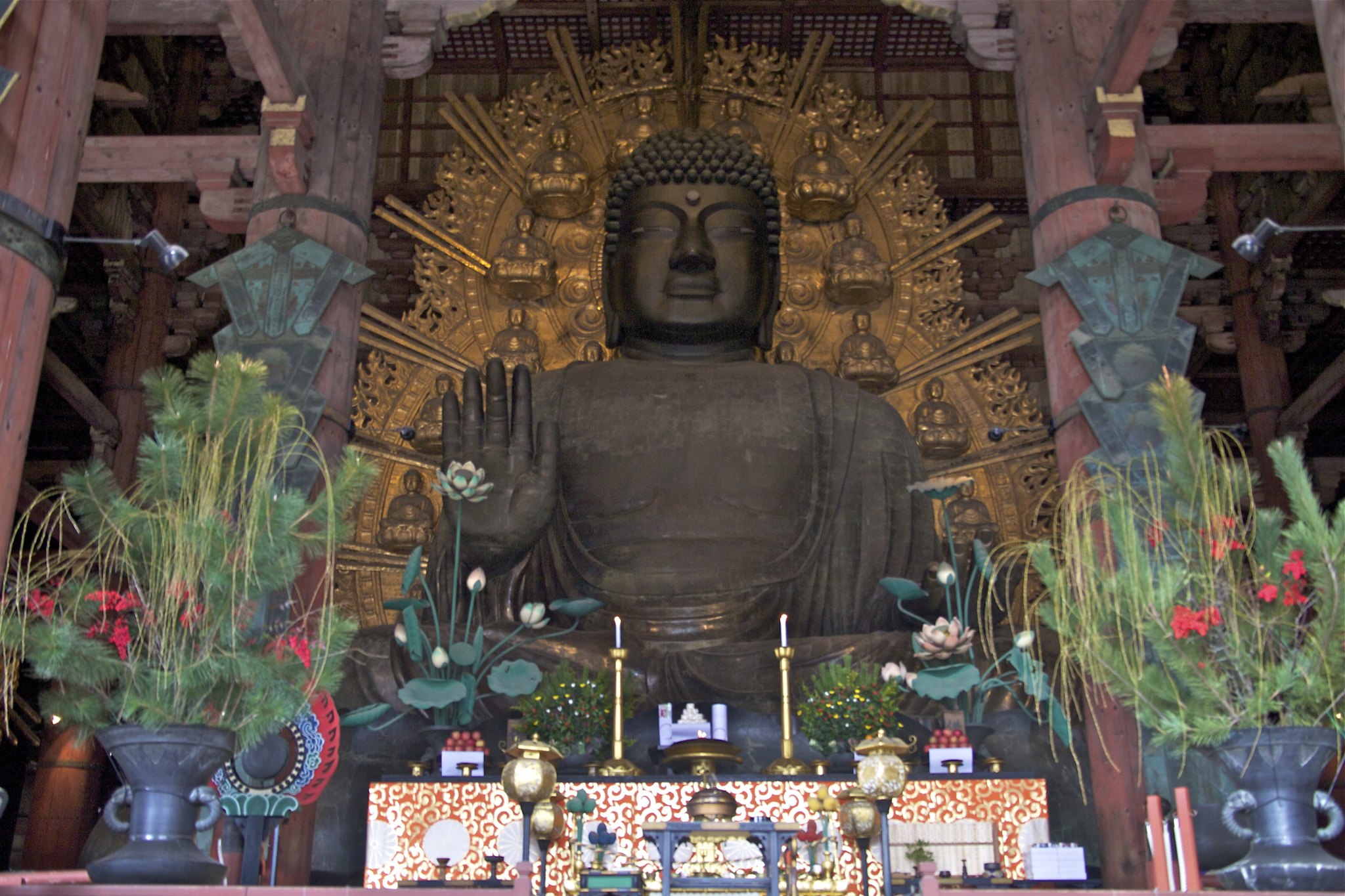 Todaiji is widely considered Japan’s most famous and historically significant temples and a landmark of Nara. The temple was constructed in 752 as the head temple for all Buddhist temples of Japan. Todaiji hall’s main hall Daibutsuen until recently held the record for the largest wooden building.  At 15 metres tall, this massive building houses one of Japan’s largest bronze statues of buddha and well worth a visit.

Kansai is a great place to visit! From traditional temples and castles to busy cities there are so many amazing places in Kansai that I am sure you will not be disappointed. It’s best to give yourself plenty of time as possible and probably only see a few places as it would be impossible to see them all!