by Trevor Jones
in Japanese Culture, Living In Japan
Reading Time: 9 mins read
A A
1
Share on FacebookShare on Twitter

12 Facts That You Didn’t Know About Japanese Vending Machines – There are many stories out there about Japanese vending machines. They have attained a legend-like status abroad based upon myths, rumors and hearsay. The vending machine has become an icon of Japan. A physical embodiment of the fast-paced life many Japanese live in the concrete jungles of major cities like Tokyo, Osaka and Sapporo.

The tight schedules that many keep are accentuated by efficient trains, convenience stores and vending machines. Because Japan is able to implement technology into daily life in an almost flawless manner, you can order at a restaurant with a tablet, check into a hotel with friendly robots and play music in the restroom while you do your business.

For a society that has achieved so much in the realm of technology, it’s no wonder why people all around the world are fascinated by Japan’s vending machines. To cure this quench for knowledge about the unknown, here are some trivia night facts that you may or may not know about vending machines in Japan.

Five million, that’s a big number! Knowing that, it is no surprise that Japan has the highest density of vending machines worldwide. You might see some lined up together in a row or in a dedicated vending machine bank. 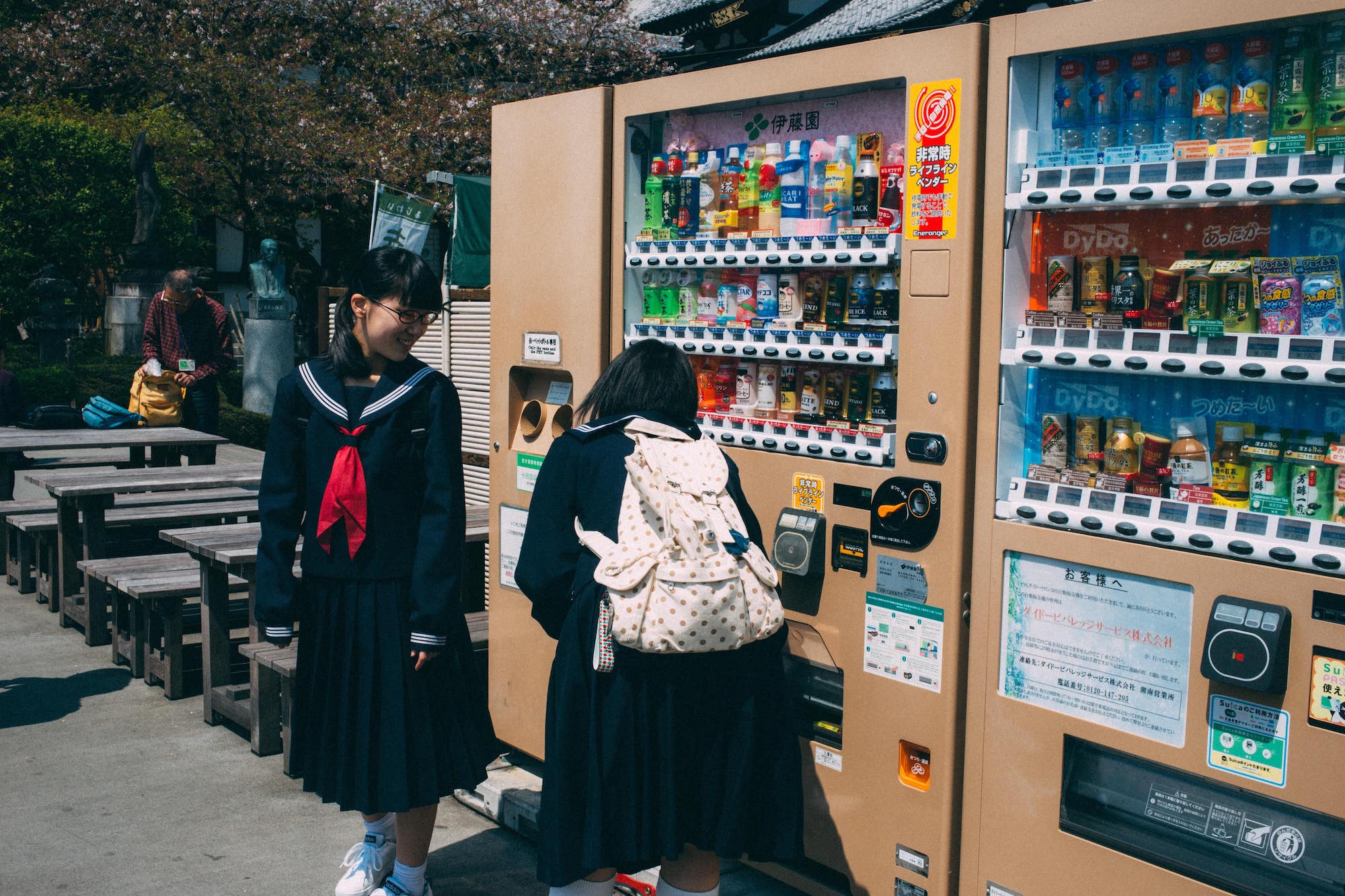 2. Japan has approximately 1 vending machine for every 23 people

This fact comes from the Japan Vending Machine Manufacturers Association. Japan is one of the most densely populated countries in the world. It has a huge population, but not so much in the way of land mass. The amount of available vending machines is good news for people who don’t share well. You only have to share your vending machine with about twenty-three others.

Sixty-million dollars. That’s some serious change (no pun intended). Most vending machine transactions are between 100 and 200-yen. Sixty-million USD is a lot of 100-yen coins. I pity the guy who has to lug around all those coins. But even more so, I feel sorry for the poor bank teller who has to process that deposit. 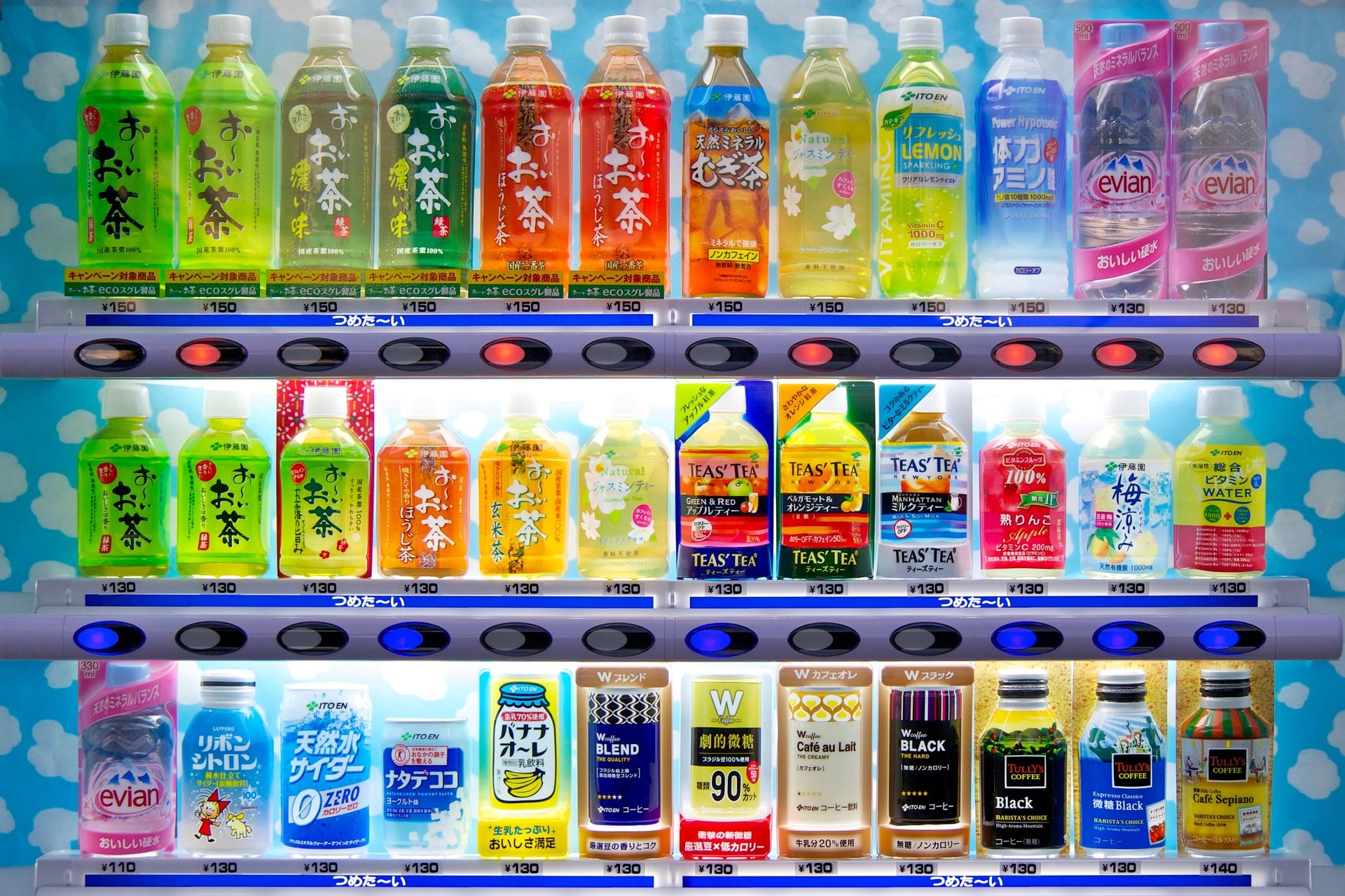 4. There are no more vacancies for new vending machines 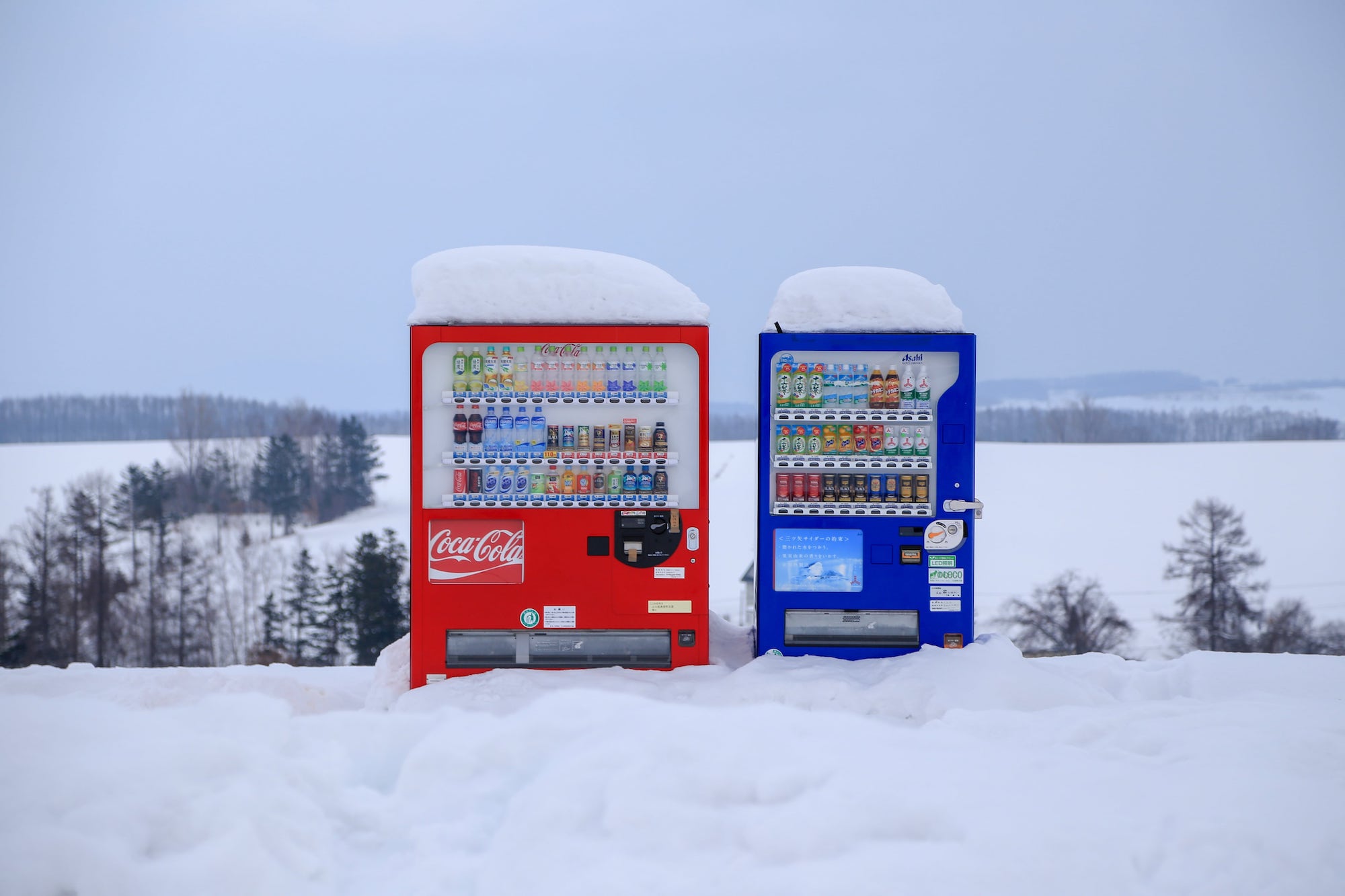 You read that correctly. By now you are probably thinking that it would be a good idea to cash in on this craze and purchase your very own vending machine in Japan. And honestly, that’s a really good idea because the barrier to owning one is incredibly low. Almost anyone in Japan can do it. Unfortunately, you might be out of luck. As of 2017, it is reported that there are no more available slots in which vending machines can be installed in Japan. I know, I’m kicking myself for missing this opportunity too.

5. If all Japanese vending machines were placed side by side, how far would they extend?

Have you ever heard that if one were to measure all the nerves in the human body, that it would stretch 45 miles long? What about the vending machines in Japan? If they were laid side by side, how far would the line go? Maybe from Tokyo to Osaka? Or New York to Los Angeles? Actually, the correct answer is that it would extend from Tokyo all the way to Hawaii. A fitting finishing line because Hawaii is one of the most popular vacation destinations for Japanese tourists.

6. Japanese vending machines can accept many forms of payment

Vending machines are designed to be quick and convenient. Counting coins can take time. And what happens if you are short in change? Not to worry, this is the twenty-first century and most Japanese vending machines are equipped to process many different types of electronic payments. 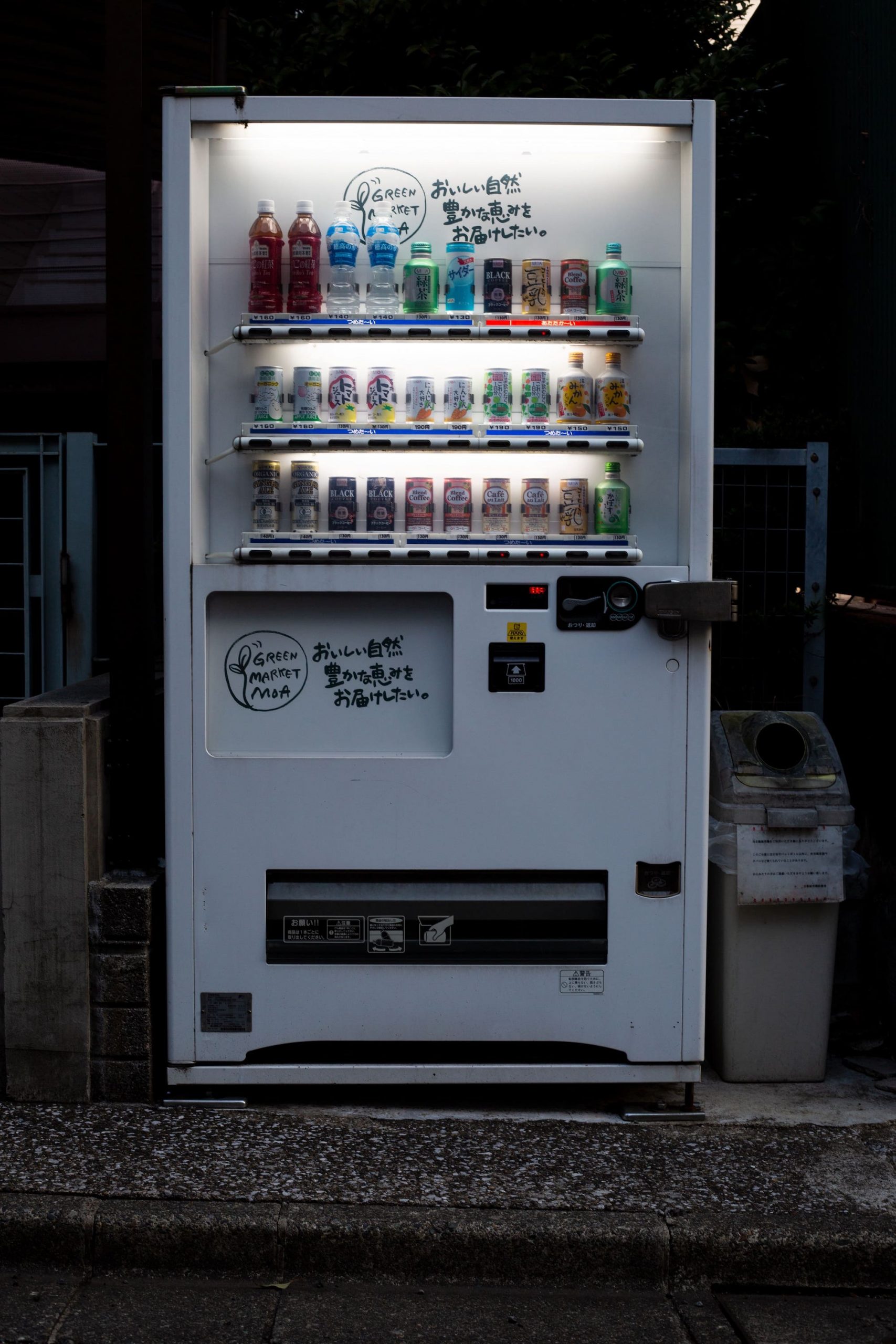 The most popular method of payment would likely be with one’s commuter pass. This is a pass typically purchased by one’s company in order for them to get to and from work using the wonderful and economical Japanese public transportation system.

In Tokyo, this pass is known as a Suica or Pasmo card, but each region has a similar, yet different, variation. You can load money onto this card at a charging port at the train station and then use your card to pay for your train and bus fares around the city. To make it even easier for commuters who may be in a rush to catch their train, you can also grab a quick drink just by swiping your card. Vending machines just became even more convenient.

7. You can purchase hot drinks 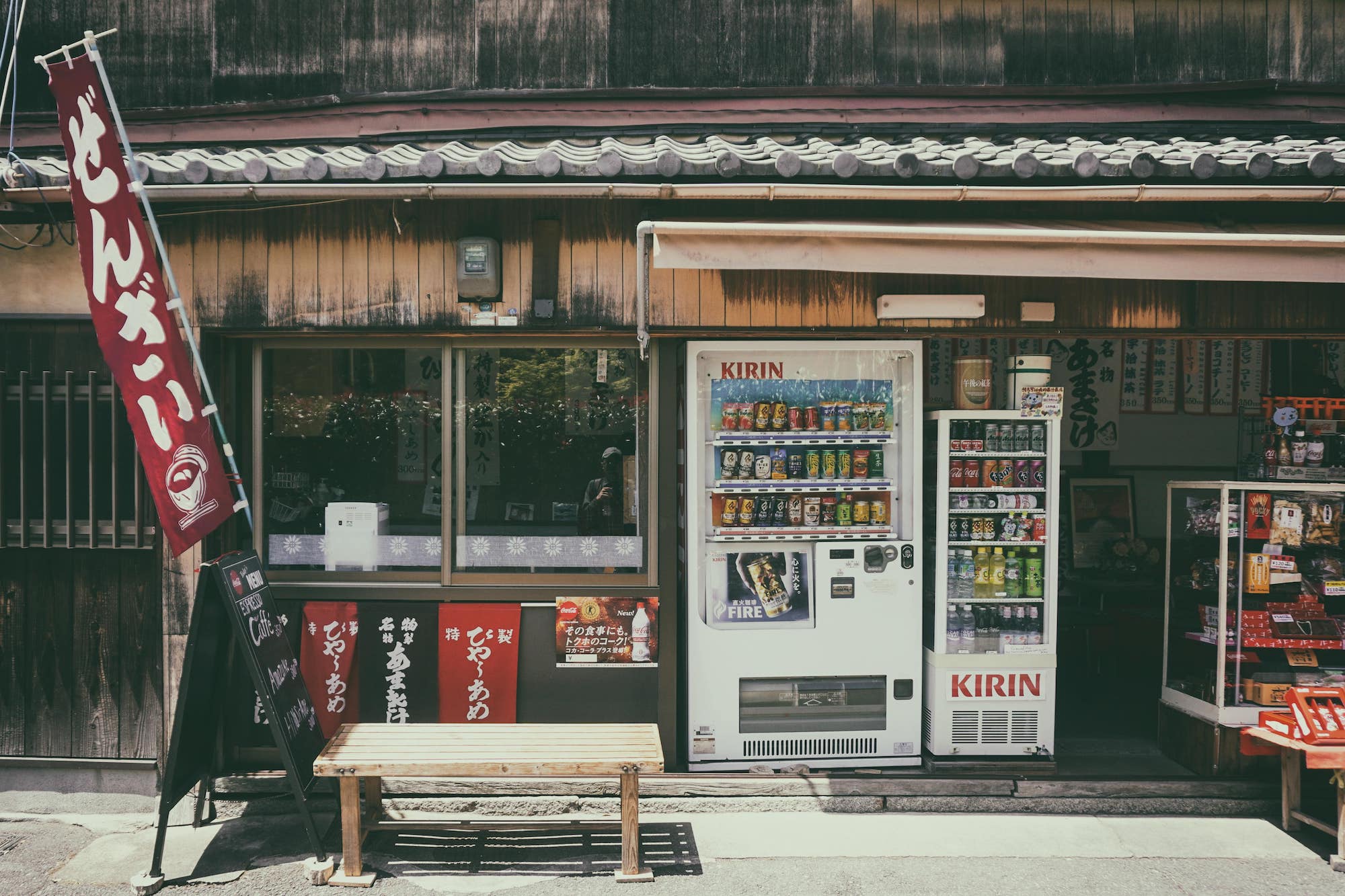 It’s winter. You have your jacket, hat and gloves on. It’s freezing and you’re waiting for your train. Or maybe your friend is late, again. Not to worry, just walk to the nearest vending machine and you can select a nice, warm beverage like tea or coffee.

This should keep your warm for a bit. But what’s that? Now your stomach is growling. You skipped lunch today and maybe you’re feeling a bit hungry too. Warm soup is readily available at the vending machine. Popular soup options include corn soup and clam chowder. Cold drinks are, of course, available year-round.

8. Do you have enough change to pay?

We’ve all been there. You have your eyes, and stomach, set on something. When you reach into your pocket to get some change, you are short. Maybe your short by 50 yen, or just 10 yen. This is the worst. As you’re unloading some unwanted coins to lighten your pockets, green lights will light up, indicating the choices available to you as you insert your money into the machine. This simple feature ensures that you can quickly choose your preferred item.

Japan has developed some of the most popular video games that the world has ever seen. Super Mario Bros, Sonic the Hedgehog and Pokémon have all exploded into massive franchises that achieved worldwide success and notoriety.

Japanese vending machines, too, have taken to a gaming aesthetic with the use of a touch screen. These displays are crisp and clear, with beautiful images of the items contained within. As if that wasn’t enough, these high-tech machines can also give you recommendations if you stand in the right spot. These machines may also display a friendly message to brighten your day. The future is now.

10. There are vending machines that only carry specialty items

If you look hard enough, you can find machines that dispense beer, underwear and dashi. Dashi is a fish stock that is commonly used in Japanese dishes. What more could one want? There are also mystery vending machines for those who are feeling especially lucky. Once money is inserted into these so-called mystery box treasure machines, you will receive a random item, not of your choosing. The machine does all the work and chooses for you. Some items retail for more than 10x the amount of money that you insert. Good luck!

As mentioned previously, there are many specialty vending machines located in Japan, and some of these machines can be found at the airport. If, at the end of your trip, you realize that you forgot to pick up a souvenir for your friends, boss, colleagues or family, don’t fret. You can grab a last-minute item at Haneda Airport. Specialty items only available in specific regions of Japan are available to you. The recipient will have no idea that you forgot about them or that you bought them something at an airport vending machine.

You may know Tommy Lee Jones as a famous movie star who has acted in some memorable films. The Fugitive, Batman Forever and the Men in Black franchise to name a few. However, in Japan, Mr. Jones is unanimously recognizable as the spokesperson for Suntory’s BOSS Coffee brand. His face can be seen plastered on the sides of various vending machines, in train stations and even on giant billboards displayed in Shibuya. Everywhere you look, Tommy Lee Jones is encouraging you to start your day with a warm cup of Joe. Enjoy!

What advancements will they come up with next to make our vending machine purchases even easier and more convenient? No one knows for sure, but what we can be sure of, is that somewhere in Japan, someone is thinking of a solution to a vending machine related dilemma that will shock and surprise us when it’s unveiled. So, make sure to you keep your loose change in a handy place so that you can be the first line for the next innovation in vending machine technology.

Best Things to Do in Himeji

Top Facts About the Japanese Language

Kumamoto Japan – All You Need To Know To Enjoy Your Trip

by Andrew Smith
0
No Result
View All Result