by Lizzy Currie
in Japanese Culture, Living In Japan
Reading Time: 7 mins read
A A
0
Share on FacebookShare on Twitter

There may come a time when you need to attend a funeral in Japan. Funeral etiquette is specific and preparing for a ceremony would demonstrate your respect towards the deceased. Some simple preparation can equip first-time attendees with highly valuable insights. Whether you are interested in the process or want to avoid making any culturally insensitive mistakes, here are a few pointers to consider.

There are two main religions that have co-existed harmoniously in Japan for some time. They are Shinto and Buddhism. Historically, Shinto was the native religion. Buddhism was introduced from abroad around the 6th century. Whilst most Japanese people actually consider themselves non-religious, their lives are based on Shinto and Buddhist teachings morally and philosophically.

With regards to funerals, almost all ceremonies are Buddhist. Japanese families will employ a Buddhist priest to participate in the rituals of his sect. Some say that whilst the ceremony is Buddhist, the spirit in which loved ones approach the rituals reflects elements of the Shinto traditions.

Ceremonies will often spread over several days. Most typically, they are split into two parts, a wake and then the formal funeral. The wake might be held the night before. It may be appropriate to only attend the wake if you did not know the deceased well. Strict Buddhist tradition dictates that a funeral ceremony should be held every seven days after death until the forty-ninth day. However, in today’s modern society, it isn’t always practical to take this length of time off work. Therefore, it is more common that only one or two ceremonies will be held.

What to Wear and Bring 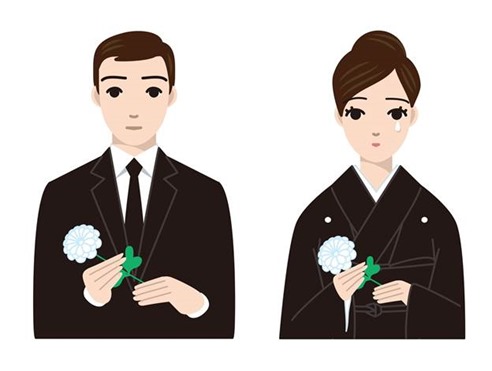 Firstly, the dress code for funerals is all black and formal. It is important to follow these guidelines as closely as possible. Men should wear a plain black suit, a black tie and black shoes. Women wear conservative matte black clothing such as a kimono or dress accompanied by black stockings and black shoes All other accessories such as bags, should stick with the black theme so as not to distract from the gravity of the situation. Jewellery can include a marriage ring and pearl necklaces and earrings only. Normally, the family members of the deceased will wear the finest attire.

Attendees should bring along Buddhist prayer beads (juzu) to the ceremony. If you do not own any, do not rent or borrow these.  Putting your hands together when you attend the ceremony will suffice.

Guests should also bring a money donation (okoden) in an envelope. You can buy the envelopes in a stationary store or at a convenience store. Double check what type of service it is before purchasing the envelope as there are certain rules to follow for certain types of ceremony.

The closer you are to the deceased will dictate the size of the donation. Consider the age of the deceased and their family status (parent, grandparent etc). As a guideline, donate 5000 yen for friends or colleagues and 10,000 – 30,000 for grandparents, cousins or other family members. Try to avoid giving amounts such as 4,000 or 40,000. When these numbers are pronounced in Japanese, they sound similar to the word death. Additionally, avoid giving new notes. This suggests that you prepared the money in advance and predicted the death. Old notes infer that this death was unexpected to you and is therefore considered more polite.

The body will be in a coffin packed with dry ice. The style of coffin will vary from simple to elaborate. You will be able to see the body’s face. The coffin will be in front of a display filled with lights and flowers that represent paradise. A photograph of the deceased will be within the display. Incense, which should be kept burning at all times, will also be present.

The ceremony symbolises sending the deceased to Buddha as a disciple by using Buddhist chants. Therefore, at the start of the ceremony the priest will recite sutras. Upon request, a Buddhist monk will give a Buddhist name for the deceased (Kaimyou). After this ritual is complete, the deceased will be allowed to enter the world of Buddha. This paradise is called gokurakujyo-do.

During this time, you will be invited to approach the altar to say your own prayers and light incense. This practise is called oshoukou and is undertaken to pray for the soul of the deceased. It also purifies the attendant’s soul. Buddhists believe that the smell of the smoke from the incense is food for the deceased and so should continually burn until the 49th day.

One after another, guests will move forward and take a pinch of incense before touching it to their forehead. They should say their goodbyes and then drop the incense into the burner or flame bowl. This process may be repeated several times depending on the type of Buddhist sect.

The practise of encoffining is rarely performed these days. However, it may still occur in places where older traditions are maintained. So you know what to expect, the process involves washing the body and blocking the orifices with cotton. The body is then ritually dressed and placed in a coffin. A female will wear a white kimono and a male in a suit or kimono. Makeup may be applied.

Cremation has been a Buddhist ritual for over a thousand years. The cremation is usually only attended by close friends and family members. When ready, the family will use special chopsticks (one bamboo, one willow: a bridge between two worlds) to pick the bones out of the ashes and place them in a burial urn. Only the bones and not the ashes are kept in the urn.

Finally, the urn filled with the ashes will be stored. A photograph  of the deceased will hang above the urn until it can be transferred to the family grave.

Almost Japanese funerals will involve cremation in line with Buddhist tradition (99%). However, at Shinto funerals, the deceased are buried, as they strongly believe in the existence of spirits. By contrast, Buddhism denies this. At a Shinto burial, the body is crouched in order not to let spirits near the dead body.

Normally, there will be food and drinks served by the family members of the deceased to thank the attendants for coming to the ceremony. After that, you may or may not receive a gift (okoden-gaeshi) as a gesture of thanks for your okoden with a packet of salt.

This salt is used when the attendants get home. Before entering the house, you should sprinkle the salt over your body. The Shinto religion believes that death is an impurity. So this practise is mainly done by those who follow Shinto beliefs in order to purify their body and get rid of evil spirits. The family members of the deceased don’t always engage in this tradition.

If you would like to learn more specifically about the encoffining procedures, the 2008 film Departures gives a remarkable insight. It tells the story of a newly unemployed cellist who takes a job as an apprentice undertaker, preparing the dead for funerals. The Oscar winner of Best Foreign Language Film in 2009, the film is a beautiful portrayal of Japanese funerals filled equally with sentimental and humorous moments.

Dealing with death is an inevitable part of all our lives. Understanding and appreciating the etiquette surrounding Japanese funerals can be one less thing to think about on the day. Hopefully, this information will help to ensure that the service runs exactly as it should.

Welcome to Aokigahara – The Scary Haunted Forest in Japan

by YourJapan Blog
0
No Result
View All Result