Christmas takes on a more secular and fun definition in the Land of the Rising Sun.

by Ced Yong
in Japanese Culture, Living In Japan
Reading Time: 7 mins read
A A
0
Share on FacebookShare on Twitter

Christmas in Japan: 9 Traditions and Fun Facts – While Christmas isn’t an official public holiday in Japan, the festival is still celebrated throughout the country. Actually, yuletide festivities often begin as early as Mid-October each year.

If you happen to be celebrating Christmas in Japan, here are 9 fun facts and traditions to know about. In short, and not too unlike other East and Southeast Asian countries, Christmas takes on a more secular and fun definition in the Land of the Rising Sun. It is also a season of love, good food, and twinkling seas of winter decorations.

Festive light-ups throughout Japan takes center stage each winter, with some beginning as early as Mid-October. While overall intended as a celebration of the year-end, Christmas is usually, if not always, the prominent theme. In other words, huge, illuminated Christmas trees are commonly the main showpieces.

The following are some of the best places to enjoy Japanese winter illuminations and lights each year:

Other than festive illuminations, many malls, transportation hubs, and downtown areas will also put up festive markets. Like similar markets elsewhere, a variety of good food, shopping, and festive performances can be enjoyed. The following are five of the most popular Christmas markets in Japan each year. 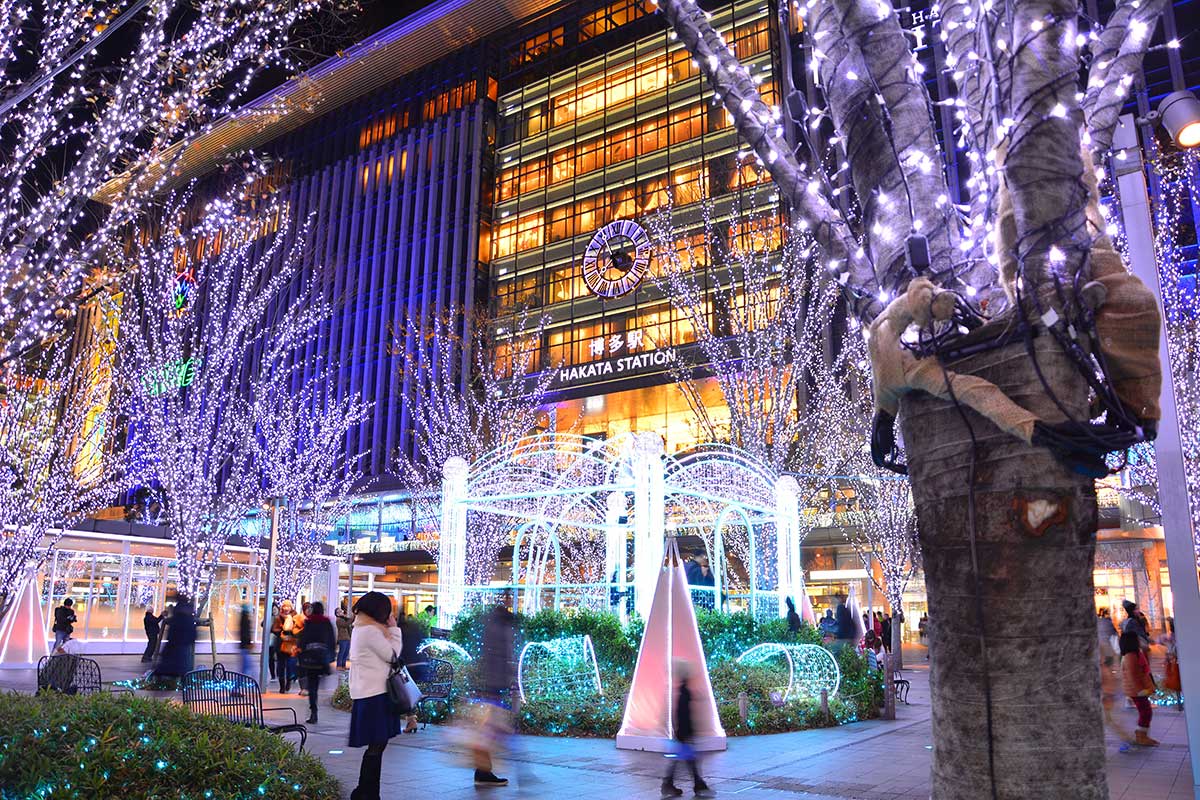 A Holiday for Lovers

If you’re a fan of Anime, you’d likely have the impression that Christmas is a holiday for love in Japan. Many Rom-Com Anime series have episodes featuring romantic events during Christmas.

In real life, this is indeed the case, with the Eve especially regarded as a day perfect for lovers. Typically, couples would enjoy a sumptuous festive dinner, and afterward, perhaps visit one of the many illumination events mentioned above. Needless to say, all departmental stores will enthusiastically promote romantic gifts during this season too. Even if you’re not buying, it could be a joy just wandering through the cheerful stores.

Meeting up with Friends and Exchanging Presents

To be clear, Christmas in Japan is not just a holiday for lovers. With the day itself coinciding with Winter Break for Japanese schools, it is also the perfect day for the young to meet up and relax. Naturally, gift exchange is often the highlight of such gatherings too.

Like their Western counterparts, Japanese children love Christmas, for it’s the time for presents! Though only one percent of the Japanese population is Christian, many families put up festive decorations in December, particularly those with young children. Many parents will also prepare gifts.

As for Santa, he’s positively everywhere! Particularly at major departmental stores such as Takashimaya and Wako. At some establishments, festive installations featuring the jolly gift-bringer and his elves could also be extremely creative. Making them wondrous for all visitors to behold.

What is Christmas without yummy cakes?

Within Japan, November and December are the months for the country’s world-renowned pastry industry to feature irresistible delights and creations. Many confectioneries also integrate seasonal Japanese flavors such as Yuzu and Oguri i.e. chestnuts into their creations, making such festive cakes superb for sampling the best of different worlds.

And among all the endless variety of pastries sold, the Japanese version of strawberry shortcake is hands-down the most popular, with some even considering this delight the one must-have Japanese Christmas cake. There’s no clear reason as to how this came to be but most likely, the colors of the strawberry cakes befit the season. According to anthropologist David W. Plath, the popularity also stemmed from a desire to emulate western affluence during the recovery days following WWII.

Yes, you didn’t read wrongly. Kentucky Fried Chicken is must-have yuletide festive food for many Japanese. It’s not uncommon for KFC outlets to see meandering queues on the Eve and the day itself. Or for families to place pre-orders.

“Historically,” this curious tradition began in 1970 when the fast-food chain starting promoting its party barrels as substitutes for turkey. In 1974, the chain further expanded on this promotion with a massive nationwide campaign, one that was incredibly well-received. In fact, so popular is this tradition, even Japan Airlines served inflight KFC meals during the 2012 season. When in Japan during Christmas, don’t forget to join the fun and grab for yourself some finger-lickin’ goodness!

Outside of winter illumination hotspots, no other place in Japan celebrates Christmas as colorfully, or as energetically, as theme parks. Majors parks such as Tokyo Disneyland and Universal Studios Japan will always host special performances, parades, and festive light-ups. In particular, Disneyland is regarded by many Japanese as the happy place to be on the Eve and the actual day itself.

An important note here, though. If you do intend to visit any major Japanese theme parks on the 25th or the days leading up to it, do be prepared for crowds. As mentioned above, the dates coincide with Japanese school winter break. Queues for popular rides and shows could be hours-long.

Like other countries that celebrate the birth of Christ, music is part and parcel of yuletide festivities. Throughout November and December, it is common to encounter buskers performing carols or festive songs in downtown areas. In recent years, it is also “customary” for Japanese amateur musicians to put up festive performances on YouTube. One example would be keyboard players performing stunning arrangements of classic carols each year.

In addition, Japan has its own festive compositions too. Here are some of the most famous ones:

Other Useful Things to Know Before Spending Christmas in Japan

Temperatures vary significantly depending on where you are. In general, Tokyo, the Kansai area, Kyushu, and other southern areas tend to be mild in December. On the other hand, Tohoku Hokkaido would be covered in snow. Do check weather forecasts before visiting.

As highlighted above, popular attractions such as theme parks could be very crowded during this festive season, especially on weekends. As much as possible, try to visit such attractions on weekdays. Go early too and if you can afford it, get a fast pass.

December in Japan isn’t just about festive cakes! There’s a variety of traditional Japanese winter cuisine to feast on too; for example, hotpots.

In colder areas, there are also a variety of outdoor winter activities to enjoy; for example, skiing. In summary, don’t forget to check these out when celebrating Christmas in Japan! Finally, for those who are looking for work, open vacancies, such as freelance japanese translator can view the site Jooble.