by Hijam Tompok
in Japanese Culture
Reading Time: 8 mins read
A A
0
Share on FacebookShare on TwitterPin this articleShare on LINE

We all know how religious Japan is, they have so many gods, shrines and even more myths surrounding them. Japanese religious myths are very complicated and very difficult to understand. And when Japan’s two main religions, Shintoism and Buddhism, got mixed, it made it even more complicated. Now we have the Shichifukujin or the Seven Lucky Gods of Japan, one of the more complicated ones, Japanese people worship them hoping to get good luck from them. Majority of the members of the Shichifukujin came from other foreign religions. The Shichifukujin represents the religious perspective of the Japanese people really well.

It is said that during the first three days of the new year they sail on their treasure ship or Takarabune from the heaven to earth, where they give out gifts, good luck and happiness. On New Year’s night, kids are told to put a picture of Baku (獏), the Nightmare Eater, or the treasure ship under their pillows before they sleep. If they have a good dream, then they would be lucky for the rest of the year. But they should not tell anyone about the dream or all their luck would go away. Similarly, if they have a bad dream, then they would get bad luck unless they pray to Baku or throw the picture into a river.

The seven gods have not always been the same, the way they have been depicted has changed over time. Each god has a specialty and most of them carry a valuable treasure with them, and they’re always smiling and laughing. Although they are called Shichifukujin and worshipped in Japan, only one of the seven gods originated in Japan. Three of them were from Hinduism in India, and the other three came from China. Now let’s take a look at each of these seven gods.

Fukurokuju is the god of wealth, happiness and longevity. You may also see a tortoise, stork or a crane next to him as the symbols of longevity. Among the seven gods he is the only one credited with being able to bring people back from the dead. Fukurokuju is said to be really short and has a huge forehead. 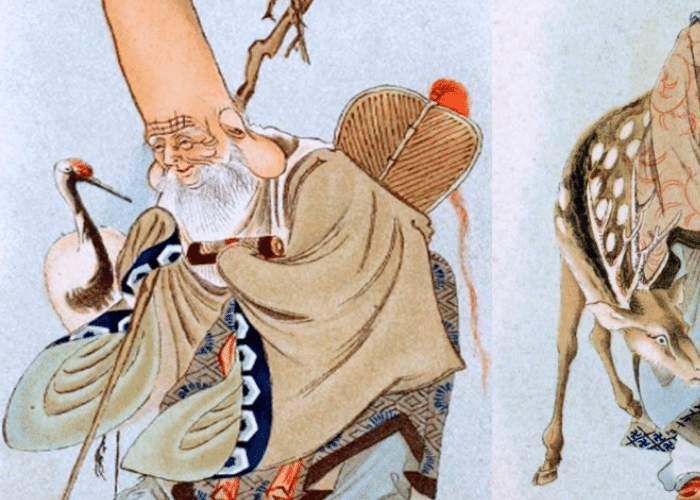 He loves to play Chinese chess. One of his famous sayings is “one who can look upon a chess game without comment is a great man.” He is basically saying that someone who can control their urge to nitpick and offer their unwanted opinions is magnificent person.

There is even a story related to this. One day a young farmer who was returning home came across two old men playing a game of chess. He stopped to watch the game, without speaking, each move by the two old men carried mastery and wisdom. He got so caught up in the game that he forgot about everything else. Though he noticed something strange, that the beard of one of the old men with long forehead seemed to grow longer as the game went on. Soon the farmer got hungry, so the old man gave him some food so he could keep watching their game, which the farmer did.

The farmer kept watching the game until he realized that the day had already passed, so he politely bid farewell to the old men and went home. Unfortunately for him, he found that his home was no longer there. After some time, he realized that while he was watching the chess game, 200 years had already passed, which to him only seemed like a day. Whether he wanted it or not, Fukurokuju gifted him a long life. 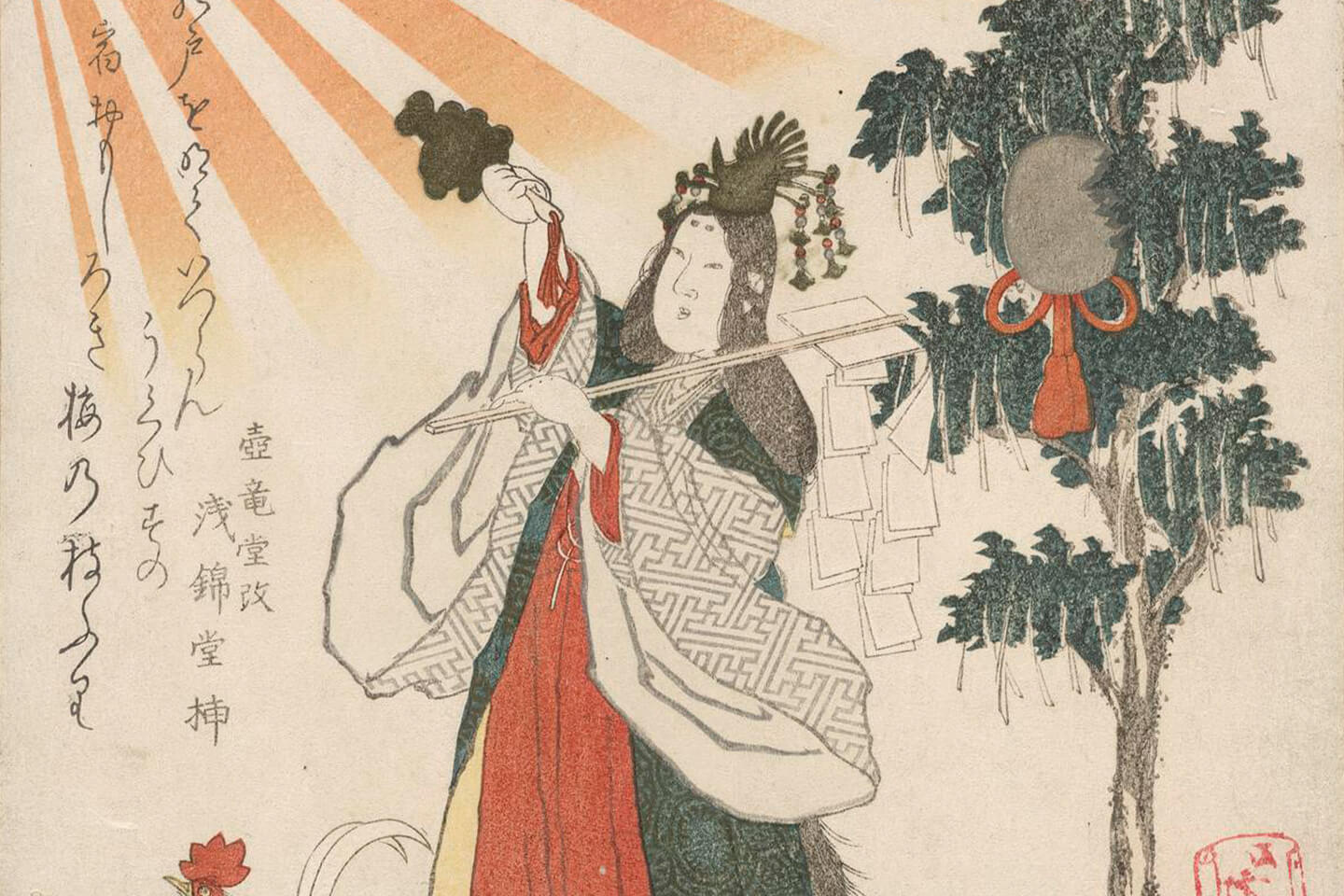 Jurojin is also the god of wisdom and longevity. Jurojin is very similar to Fukurokuju, and people do often confuse these two with each other a lot. Both of them are gods of wisdom and longevity, both of them carry a cane with a scroll, both of them were believed to be Taoist sages in the past and both have big white beards. Well, this is mostly because it is believed that they’re supposed to be two different manifestations of the same god. Some people say that before he became a god, Jurojin was Lao-Tzu, the founder of Taoism. And similar to Fukurokuju, he has a deer companion.

Hotei is another god from China. Most people have probably seen or heard of him somewhere at least once already. He is the famous Laughing Buddha. He is always laughing, has a big belly and is bald. Hotei is the god of happiness and prosperity.

He wears a typical Chinese Buddhist monk outfit. Usually when people have big bellies, they try to hide it under their clothing out of embarrassment, but Hotei never cared about this and just exposed his big belly. He always carried a big sack (袋), which is also reflected in his name – Hotei (布袋), which literally translates to cloth bag in English.

Ebisu was the only one Shinto god of the group. He is a god of fishery, and he is especially popular among the farmers, fishermen, and merchants. In most of his depictions he carries a big fish in his left hand and a fishing rod in his right hand. He is also called the god of the ocean. Whenever fishermen go out for fishing, they usually pray to him for their safety and good catch. Ebisu is one of the most popular gods in Japan, probably because Japanese people love fish.

Ebisu’s lineage varies depending on his origin, he is more commonly believed to be Hiruko, the first child of gods Izanagi and Izanami. Ebisu was born imperfect, in some versions he was born without bones (or without arms and legs in other versions), and since he was imperfect, Izanami and Izanagi put him in a boat and abandoned him before he was even three years old. In some other versions of Ebisu’s origin, he is the son of Okuninushi, the god of magic or Daikokuten, one of the seven lucky gods. Fun fact, Japanese beer brand Yebisu is named after Ebisu.

Daikokuten is a god of wealth, earth, rice, agriculture and he is also the patron god of farmers. You can often see Ebisu and Daikokuten together in kitchens, because both of them are associated with food. He was originally a Hindu god of warriors, Mahakala also known as Shiva in Hinduism, and his original depictions were really scary because he represents the ultimate destruction. But in the early 1300s, artists began to draw him very differently from his original depictions.

Benzaiten originally known as goddess Sarasvati, another Hindu goddess and she is the only female goddess in the Shichifukujin. Benzaiten is considered to be the goddess of love, beauty, literature, art and music. Sarasvati is credited to have killed the three headed serpent, and this is probably one of the reasons why Benzaiten is closely associated with snakes and dragons in Japan. She also has a bad reputation for being really jealous. According to the myth, she fell in love with Vaisravana, one of the four heavenly kings of Buddhism, but Vaisravana started a family with someone else which really angered Benzaiten.

Benzaiten then started breaking up happy couples for revenge. Which then gave birth to another popular belief that couples should not visit her shrine together, or she would become jealous and ruin their relationships, which is quite contradictory because she is supposed to be a lucky goddess. However, Benzaiten is not known to be a jealous goddess outside of Japan, so many started to raise suspicion that it was just a lie to keep people away from the island of Enoshima, which was known to be a place for prostitution in the past.

Bishamonten (毘沙門天) is known as one of the four guardian gods in Japanese Buddhism, but he was originally derived from the Hindu god of wealth, Kubera. While he is believed to be the god of prosperity and wealth, he is also known as a strong guardian god. Bishamonten holds a polearm on one hand and a stupa on the other hand, which is a pagoda type thing that represents a building that stores Buddhist teachings. Warriors prayed to Bishamonten for their victory before going to battle. Bishamonten had a rather unique messenger, a centipede. Why centipede? People used to think that centipedes possess an ability to detect gold mines and so they used to carry them in bamboo tubes when they went to the mountains looking for gold.

Another interesting thing about the Seven Lucky Gods is that, in Japan, the number 7 is also considered to be a lucky number. So almost everything about them is lucky.

An East Asian Studies student from India who loves Japan and I wish to move to Japan one day. I love reading old myths and folklore. My hobbies are reading, cooking and football.

10 Amazing Christmas Limited Edition You Need to Try in Japan