10 Places You Must Visit in Fukuoka Prefecture

Fukuoka is well known as a top destination for street food, having been listed in Asia's 10 greatest street food cities.

by Madina Baygelova
in Japan Travel
Reading Time: 7 mins read
A A
0
Share on FacebookShare on Twitter

The place of the most mouthwatering ramen all around Japan which is served fresh and hot on open-air food stalls and where the remains of ancient Japanese culture are still being discovered – all this can be found in Fukuoka Prefecture, the treasure of Kyushu Island. Not to waste a hot summer days we’ll present you 10 places to visit while being in Fukuoka Prefecture to get memorable impressions that will warm you once chill of coming autumn knocks your window.

Get lost in Itoshima Peninsula

Rightly considered as a hidden gem of Japan, Itoshima Peninsula is bounty land which grants people not only one of the most delicious vegetables but also a spectacular sceneries and a getaways from hustle and bustle of the city life . Being adjacent to Fukuoka city, it’s quite accessible as it takes about 40 minutes by train from the Hakata station.

Upon arriving we recommend you to rent a bicycle as it’s quite challenging to explore the area on foot. There’s a lot of things to do starting from visiting vast and stunning beaches to drop by the local fancy cafes that serving dishes made of local vegetables. Once you come to the sea coast, marvelous views of Genkai turquoise sea waters will make you feel like you are lost somewhere in paradise. There’s also can be found the swing hanged between two palms which definitely helps you take some mind blowing photoshoot.

Futamigaura Beach invites you to take a shot.

Another beach called “Futamigaura” incorporates the Japanese spirit in addition to spectacular seascape. Dazzling white Torii and couple-like wedded stones floating right in the pure emerald sea make this place genuinely unique and will ingrate in your memory for sure.

It’s believed that long time ago it used to be the sacred place as a land owned by Sakurai Shrine and during the spring low tide they conducted the rite that considered to put one ton of shimenawa (rope used to cordon off consecrated areas from the evil spirits). By now, rituals are no longer conducted but it’s still strictly forbidden to untie or cut the sacred rope.

See off the sunset from Shiomi Park Observatory

Being a gateway Shinakoshima island is connected to the mainland by the sandbar so you can get there by bus or by boat without any problems.

Once you get there the beautiful scenery of water will be laid in front of you, but we recommend you to go to the Shiomi Park observatory which provides you with the perfect view of Hakata bay and Genkai sea. But if you come over here right before the sunset you can gaze genuinely stunning view of sun drowning and mesmerizingly glittering all over the sea surface.

Besides that the sandbank that is situated in the middle of the sea, also could be overlooked from that point. If you rent a car, you won’t be flustered looking for a place to park as there’s a parking lot right next to the Shiomi park.

Located in Fukutsu city, originally Miyajidake Shrine was dedicated to Empress Jingu served as a house of peculiar and unusual items of fortune and protection. Three of the biggest and  claimed to be the most powerful items are also held here and referred to as “Japan’s best three”.

Apart from that, the Shrine has an abundance of Japanese iris which growing all around the ground. From the 31st of May to approximately mid-June, there’s also a festival dedicated to Iris blooming. You might be impressed not only by alluring iris flowers sprawling throughout the area, but also by the quaint and enchanting dance of miko (the shrine maidens) which is performed particularly on the 31st of May.

As you keep exploring the Shrine you can encounter the little old-styles Japanese houses which been once wrecked and then reconstructed here.

Enveloped in mysterious and unique atmosphere, Dazaifu Tenmangu is the Shrine dedicated to Michizane no Sugawara- the poet and politician who was unfairly exiled to the Dazaifu after the battle defeat. It’s actually believed that after a few years of his death the calamities and disasters followed those who were involved in accusations. In order to quell the restless spirit the Emperor himself burned the official order of exile.

Moreover Michizane was deified and became a Patron god of calligraphy and poetry. That’s why this Shrine is quite popular among students once the exam period approaches. Talismans and charms bought in Dazaifu Tenmangu believed to have a magic powers. This shrine is also perfect for strolls and photo shoots due to densely blooming plum trees scattering its petals all over the area.

There’s also wooden-styled Starbucks nestled nearby so once you’re tired of the walking why not drop by and have a break sipping a real coffee.

This shrine was found in the middle of Kamakura period and belongs to the Tofukiji school of Rinzai Zen Buddhism. Hovewer, upon the entrance the distinctive notes of what Japanese refer to as “wabi sabi” are floating in the air tend to dissipate once you come closer.

The park itself is made up of two separate rock gardens, front garden and rear garden. Being the smaller one of two, the front garden is consisted of fifteen rocks that are laid among the pebbles so that they form the kanji “light”. The main building of the temple or honden is overlooking the rear garden, which fits an abundance of plants along with the pebbles, stones and moss patches.

As the autumn approaches, the Shrine becomes a popular autumn spot for its marvelous Momiji or maple leafs blooming all around the area. 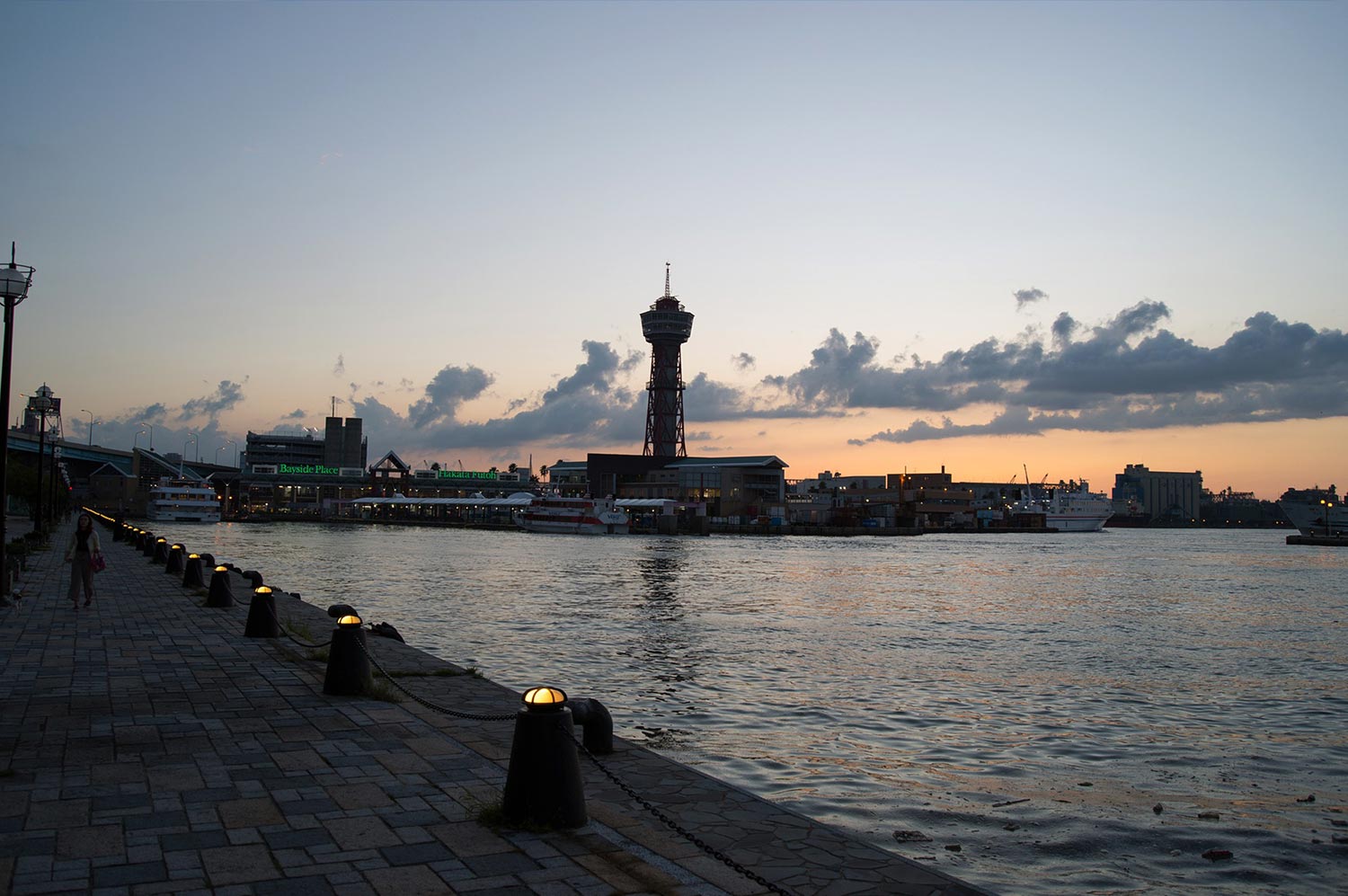 If you are shopaholic or just into a sophisticated interior design you will definitely fancy visiting the Canal city Hakata. Spacious and wide with distinctive colors and shapes, this facility aims  to create a unique atmosphere which for sure ingrates into a memory of visitors. It consists of 250 shops, restaurants and cafes , theater, two hotels and artificial canal running through the complex.

Also known as “city within the city”, canal city Hakata will cater to any type of guest as it has an abundance of choice. No matter whether you prefer Japanese style brands or brands of international companies, Canal city will definitely meet your demands. You also can try legendary Hakata ramen as it’s served on the 8th floor along with another noodle dishes from all across Japan.

The place is situated In Sasaguri area and also renowned for its connection to Sasaguri pilgrimage. But of course the first thing that draw your attention is Buddha which 41 meters long and it’s said that if the Statue of Liberty was reclined it would be shorter let alone Kamakura and Nara Buddha statues which are dwarfs against the Nanzoin temple Buddha.

Built in 1995 to the house ashes of Buddha and two adherents, Ananda and Maudgalyayana, this Buddha is bronze-lined. The reclining pose symbolizes that Buddha faced the death and entered nirvana. You will be led to Buddha through the Shichifukujin Tunnel which alluded to Japan’s seven Gods. Once you reach the statue the first thing you are supposed to do is to grip the vivid colorful ropes that hang from Buddha’s left hand and pray.

After that you should walk around the luxuriantly decorated Buddha’s feet and place a coin for luck. Besides the large bronze Buddha, wayside shrines, tea houses and statues of various deities are laid along the way made in south-east Asian style.

Being one of the first national museum in more than 100 years, the Kyūshū also got famous for its award-winning exterior design. Despite that from the outside museum resembles sport stadium, you will surely be pleasantly surprised once you enter the building. The spacious and light entrance hall take your breath away and definitely inspire you to explore the whole area with unique and distinctive historic artifacts here and there.

On the first floor you also can find the room called “Ajippa” which holds a hands-on exhibits and games from different parts of Asia. The main exhibition area which is situated on 5th floor divided into few zones which of each presents the specific historic period in a unique manner. So to immerse visitors into the ambient atmosphere of concrete period. The exhibition spans the Japanese history from Prehistoric era to Edo period and also traces the historic importance of the island as a trading link between China and Japan.

Apart from exhibition part of museum, there are also played a little theater performances using up-to-date technologies that definitely impress spectators. Once you’re bored and tired, lined up restaurants and well-stocked shop let you have a break and analyze the whole historical information that was displayed on exhibition.

Situated in Kitakyushu city, Kawachi Wisteria Garden is listed in “top 100 Japanese beautiful spots” and it’s quite reasonable since it houses numerous species of wisteria from white to dark purple. The most memorable features of the park are two enormous tunnels with wisteria hanging right from the roof and resembling a fairytail portal between the worlds.

Enchanting and magnificently beautiful wisteria attracts visitors from different parts of world. However it doesn’t bloom so densely every year so before visiting make sure in advance if it is in full swing or not. Apart from wisteria, there are also can be viewed a vast bamboo groves once you get the top of the hillside. The park is quite busy and cramped during the Golden week, so once you decided to come over prepare yourself to wait in a line.

Born and bred in Kazakhstan and being an EFL teacher by training by vocation I consider myself as a writer. My leisure time I spend learning languages and reading books thanks to what I can travel from one point to another in space and time without getting on the planes and trains.