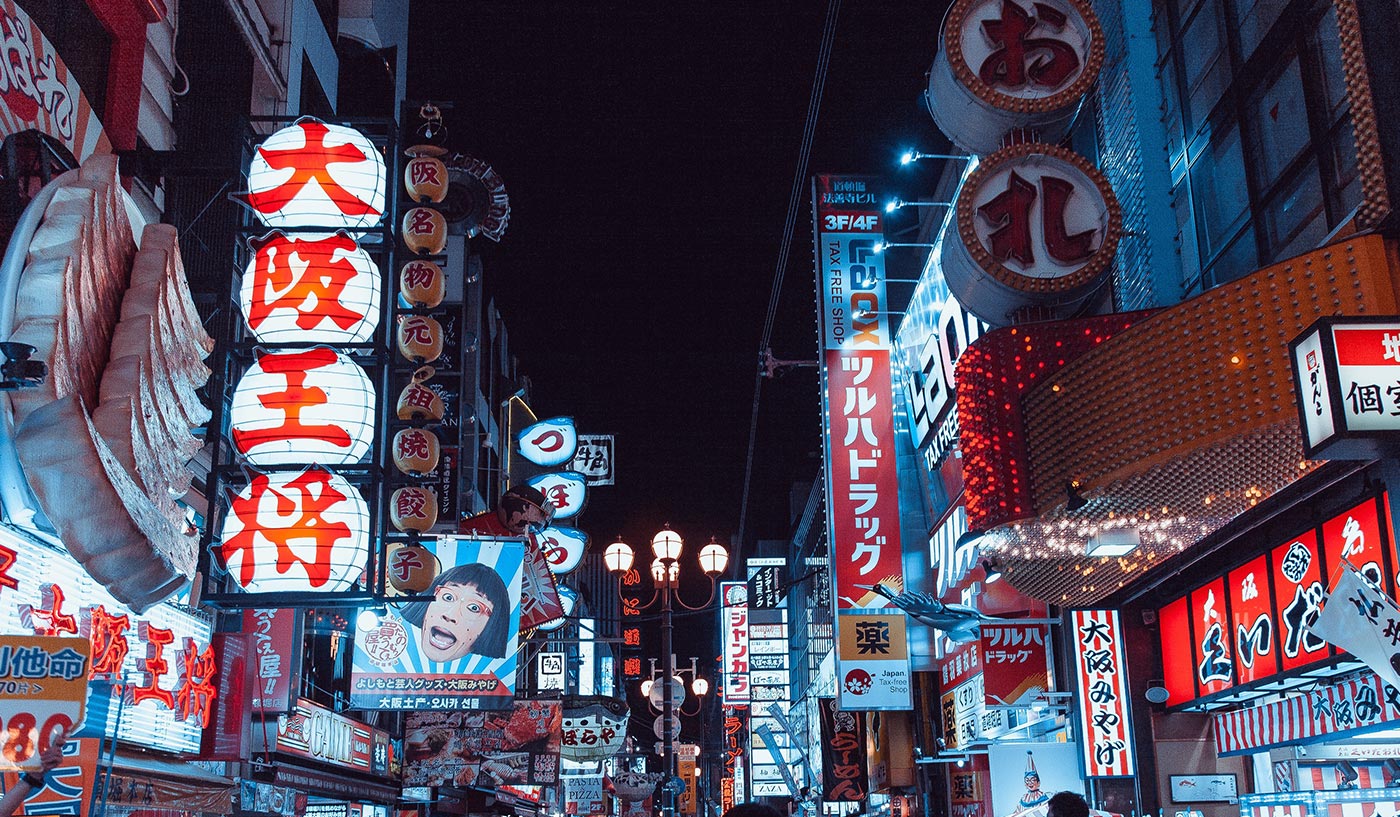 20 Top Things to do in Osaka

For those looking for a city that will give them the fun and excitement of Tokyo mixed with the culture and history of Kyoto, Osaka is a dream destination for many who visit the islands of Japan. Hosting a slightly smaller metropolitan area than Tokyo, this capital city of western Japan has more to offer than just ancient shrines and amusement parks. Listed below are the top 20 things to do while traveling through Osaka, which will hopefully give you some ideas and inspiration for your next trip to this lovely city! 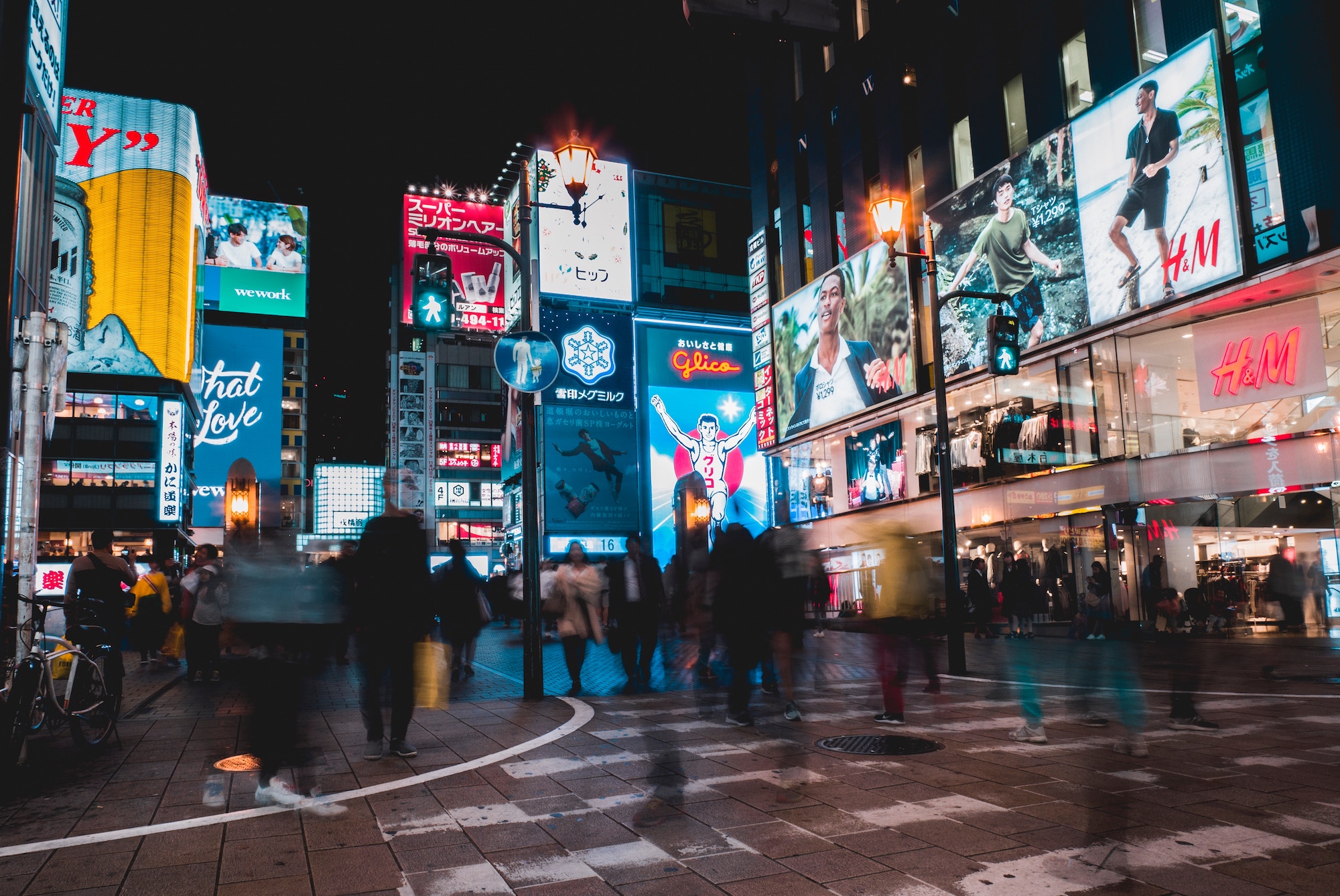 It’s no surprise that we’re starting off the list with one of Osaka’s most popular attractions, as travelers come from all over the country to enjoy the sights and local fares Dotonbori is known for. Some of the most highly recommended things to do in Dotonbori include: eating okonomiyaki and takoyaki, shopping at Kuidaore, and partaking in the nightlife scene at Hozenji-Yokocho Alley! 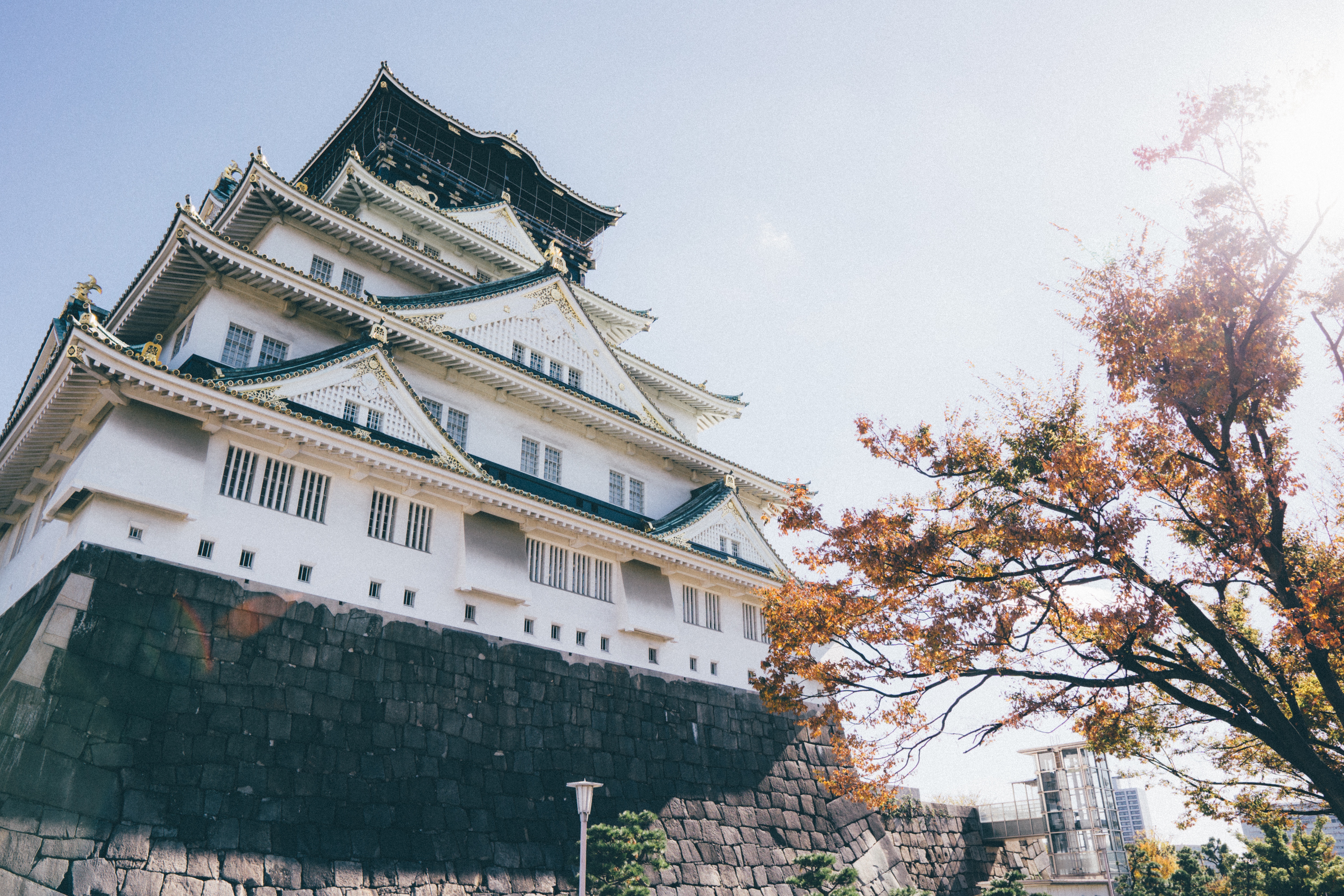 Rebuilt twice before, Osaka Castle is a gorgeous structure that looks historical and traditional on the outside, yet modern and stylish on the inside. Since being rebuilt in 1931, the castle has hosted a museum within it that details the extensive history behind the traditional building, as well as the original owner of the castle, Toyotomi Hideyoshi. Surrounding the castle is a beautiful garden and the Osaka Castle Park. 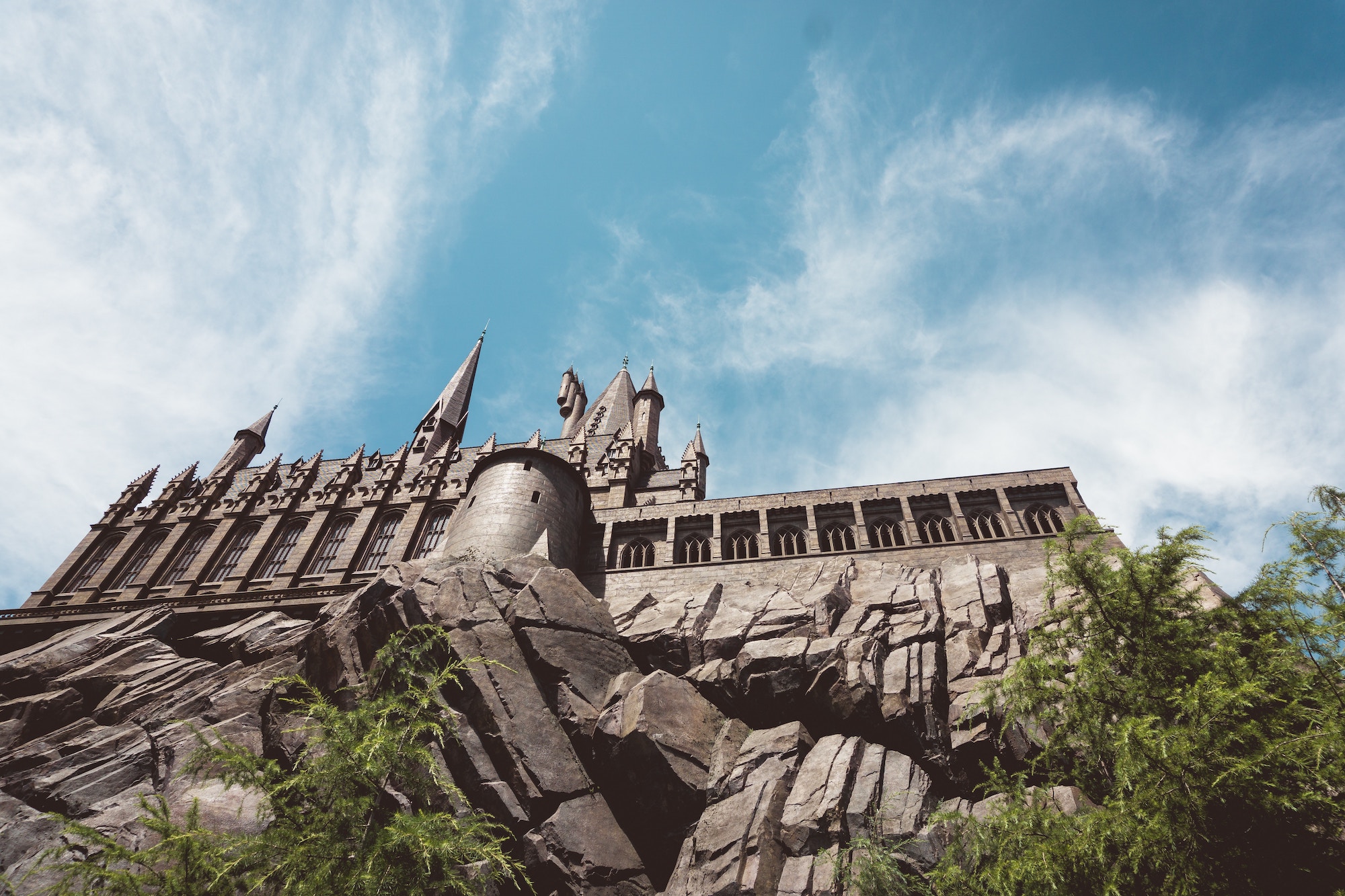 For those who love roller attractions, shops, and shows, Universal Studios Japan is a great place to spend a day while traveling through Osaka! Even if your Japanese skills are lacking, you’ll still be able to enjoy yourself while riding roller coasters or watching live events that are both fun and magical! You can also enjoy Japan specific rides and attractions, featuring characters like Detective Conan, Lupin the Third, Godzilla, Sailor Moon, and more! 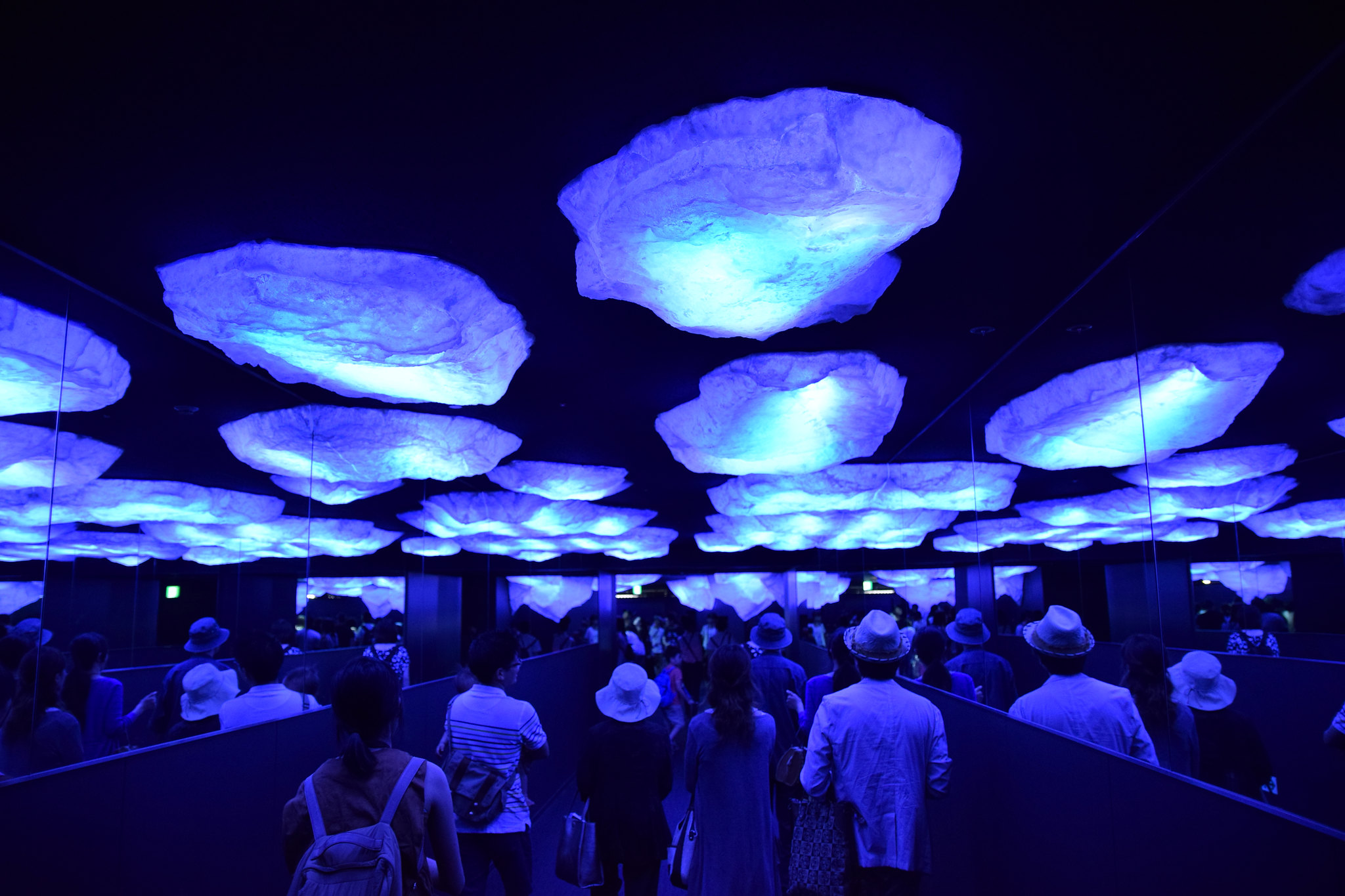 Featuring animals from the Pacific Rim, Kaiyukan Aquarium is one of Japan’s biggest and best aquariums to visit! Boasting over 15 enormous tanks that house creatures from specific regions in the Pacific Ocean, visitors can virtually travel across the entire ocean in just an hour or two! New interactive exhibits provide visitors with even more intimate experiences with ocean life. With over 30,000 creatures and over 620 species, there’s a lot to see and explore in this vast underwater wonderland!

Known at the Eiffel Tower of Osaka, the Tsutenkaku Tower has stood as the symbol of Naniwa and focal point of the area. A gorgeous view of Osaka can be had on the 5th floor of the tower, and visitors can learn about the history and structure that’s been rebuilt twice. Don’t forget to pass by the statue of Biriken and rub his feet for good luck!

We are all in the gutter, but some of us are looking at 🍜

Although it may seem strange to have the head office of Japan Mint on the list, those that travel to this location are generally interested in something other than metal analysis and coin supply; namely, over 300 cherry trees surrounding the area. The trees are at their finest during mid April, during which a special opening ceremony takes place at the gates of the garden. The Mint Museum is open year round for those who are actually interested in how Japanese coins and medals are produced and processed. 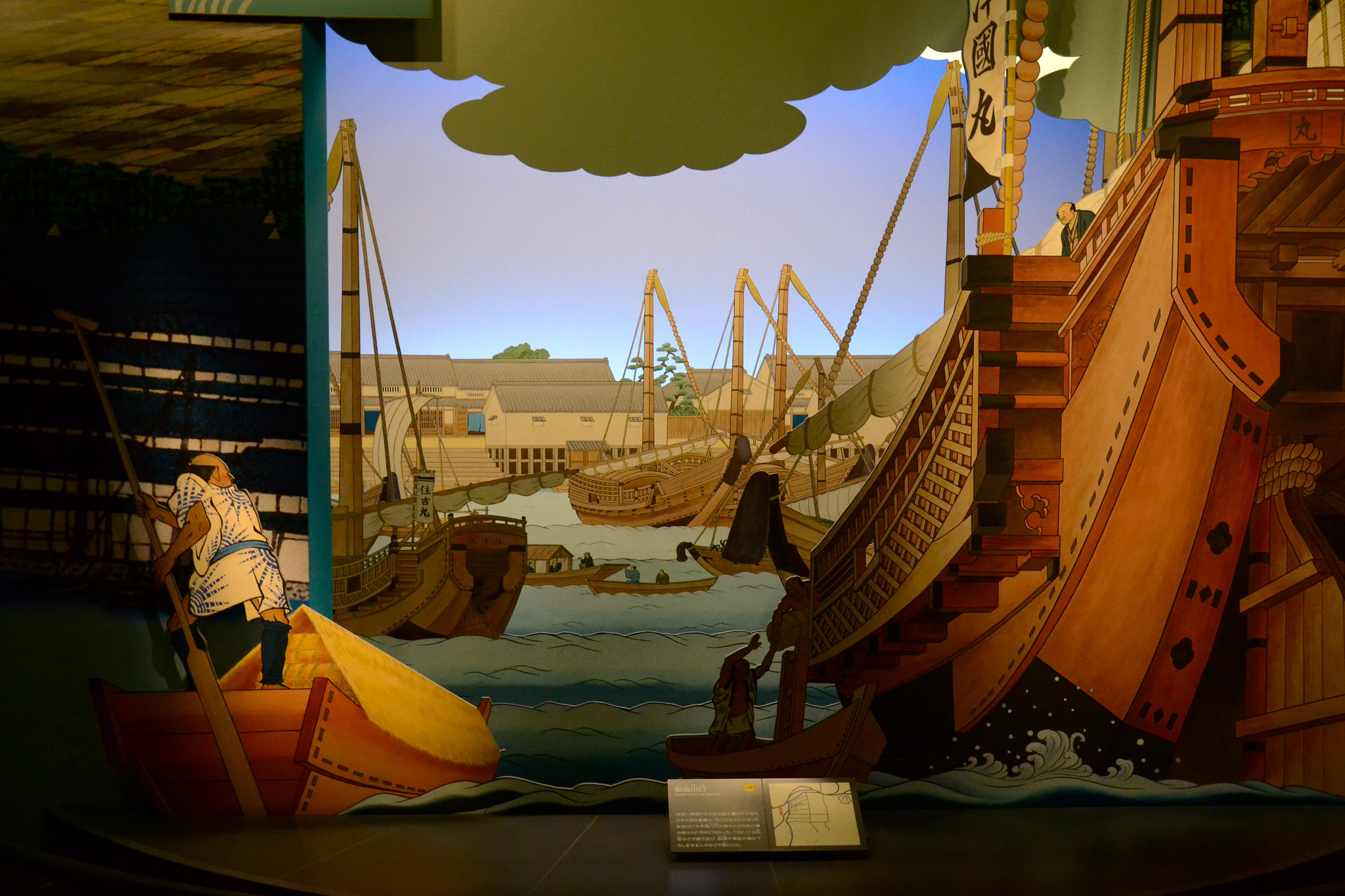 Opened in November of 2001, the Osaka Museum of History has always been guided by the need to preserve Osaka’s history and share the city’s charm and positivity with both citizens and travelers. Their mission, as they say, is “To dialogue with History, in order to reflect upon our Present and Future”. Guests are free to either take the Highlight Course, Complete Course, or simply walk through the museum unguided.

Osaka Expo ‘70 is an expansive commemorative public park built on the former sight of the Japan World Exposition in 1970. There are over 5000 cherry trees on the grounds, making the park an especially popular destination for those who wish to view the cherry blossoms during the spring season. Many of the original installations from the original expo are still present in the park, such as the Tower of the Sun and the Dream Pond. Guests can also enjoy the Museum of Ethnology, Japan Folk Crafts Museum, the large shopping and entertainment complex called Expocity, and the memorial museum in addition to the natural beauty of the park. 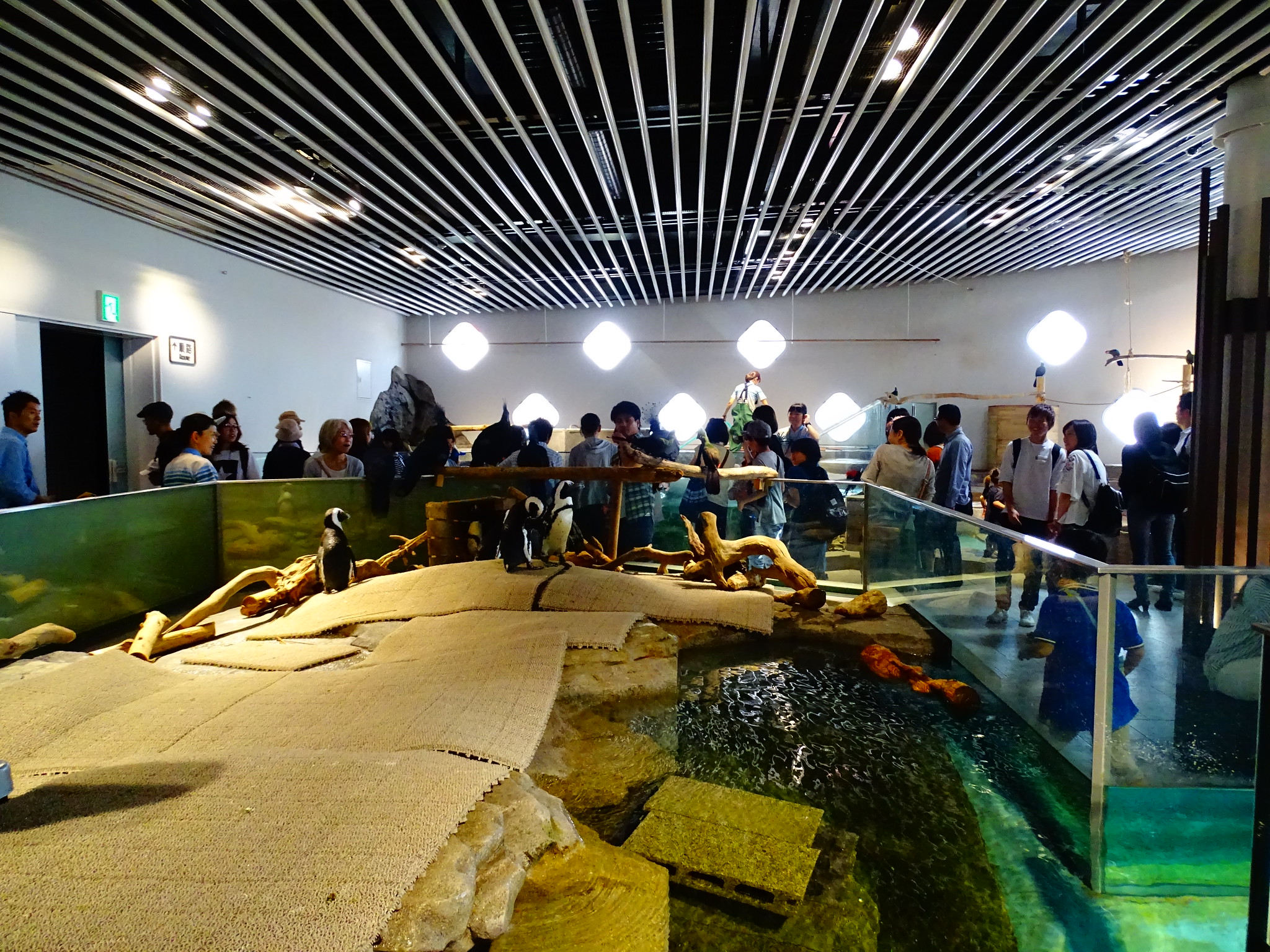 NIFREL claims to be a ‘living museum’ based on the concept of touch and sensitivity, and as such calls themselves an interactive aquazoo. NIFREL aims to not only showcase exotic and unique animals, but create an atmosphere for better experiences where guests can connect with said animals on a deeper level. Featuring exhibits such as ‘colors’, ‘shapes’, ‘abilities’, ‘mimic’, ‘waterside’, and more, you’ll truly have a one-of-a-kind experience at NIFREL!

There’s plenty to see and do in this park, as it houses spacious lawns and is near plenty of shops, cafes, and restaurants. If you want a little more excitement, there’s also beautiful landscape gardens, recreation facilities, a zoo, and the Osaka City Museum of Fine Arts nearby. For those traveling with young children, a spacious and entertaining playground can also be found in the park.

For those who want to see the hectic and busy side of Japan’s fish market, Osaka Central Fish Market provides and interesting and unique look into the buying and selling of the majority of food that’s supplied in Osaka. As this area is not a public tourist attraction, but an actual market that’s set up to expedite the moving of food products, it’s best to try not to get in anyone’s way and try to view the hustle and bustle from a safe distance. Even so, you’ll be sure to see such sights as giant tuna, hundreds of kinds of fish, fruits and vegetables, live auctions, and more! 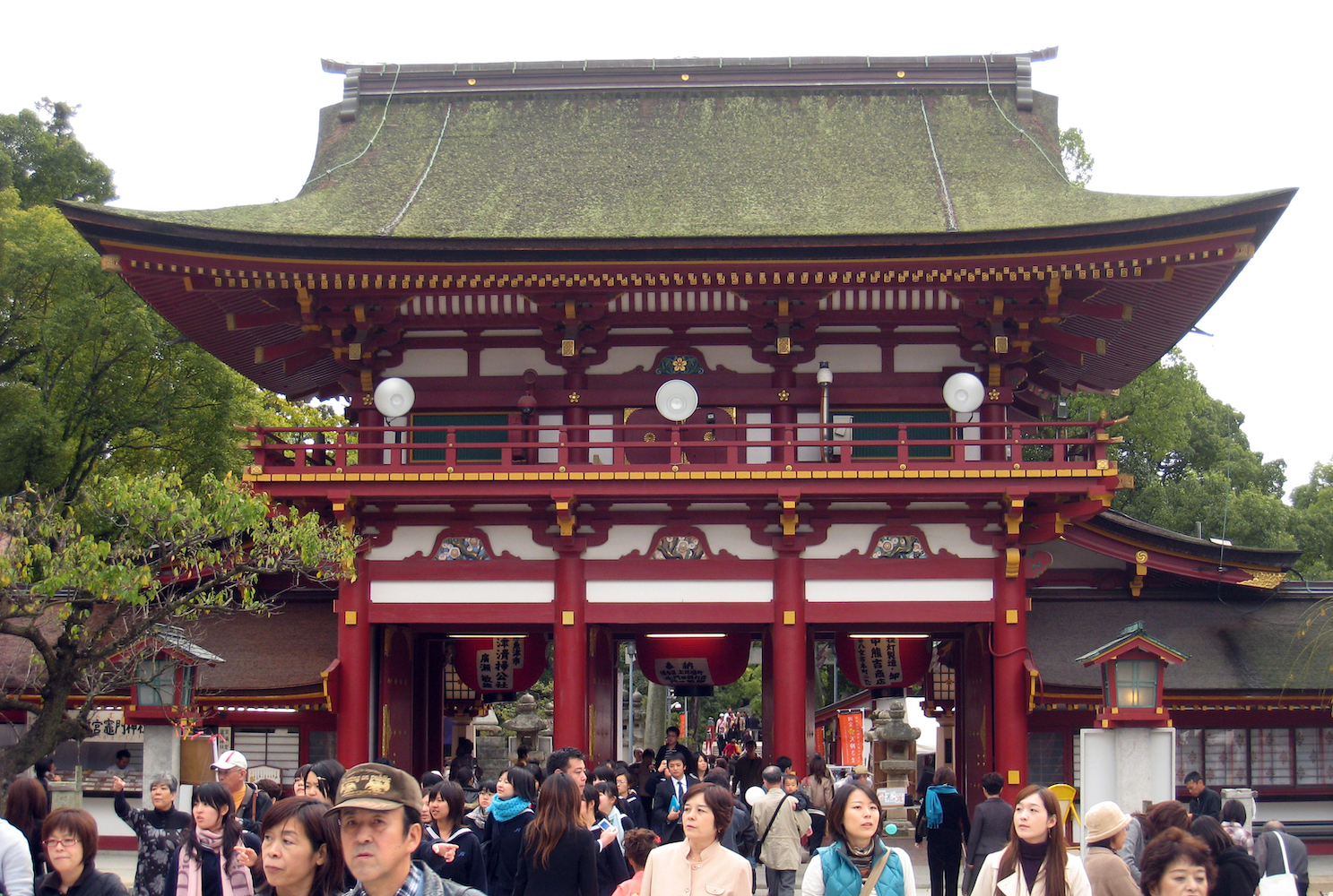 This famous shrine in Osaka is best known for its most popular festival, the Tenjin Matsuri, which takes place every year on from July 24th to the 25th. Together with Kyoto’s Gion Matsuri and Tokyo’s Kanda Matsuri, the Tenjin Matsuri is one of Japan’s top three festivals. Huge crowds gather around the shrine during the matsuri as the shrine’s deity is paraded through the streets with fireworks displays at night. Even if you won’t be in the area during this monumental event, the shrine itself is full of rich history and tradition and a joy to explore.

One the location of Toyotomi Hideyoshi’s wife’s residence, the Nishinomaru Garden opened in 1965 to showcase 600 cherry trees that bloom during the spring season. Visitors can enjoy such sights in the daytime or during the night cherry blossom viewing events. In the northeast area of the garden visitors can find Hoshoan, a tea ceremony house where they can rest and relax while enjoying traditional Japanese tea. 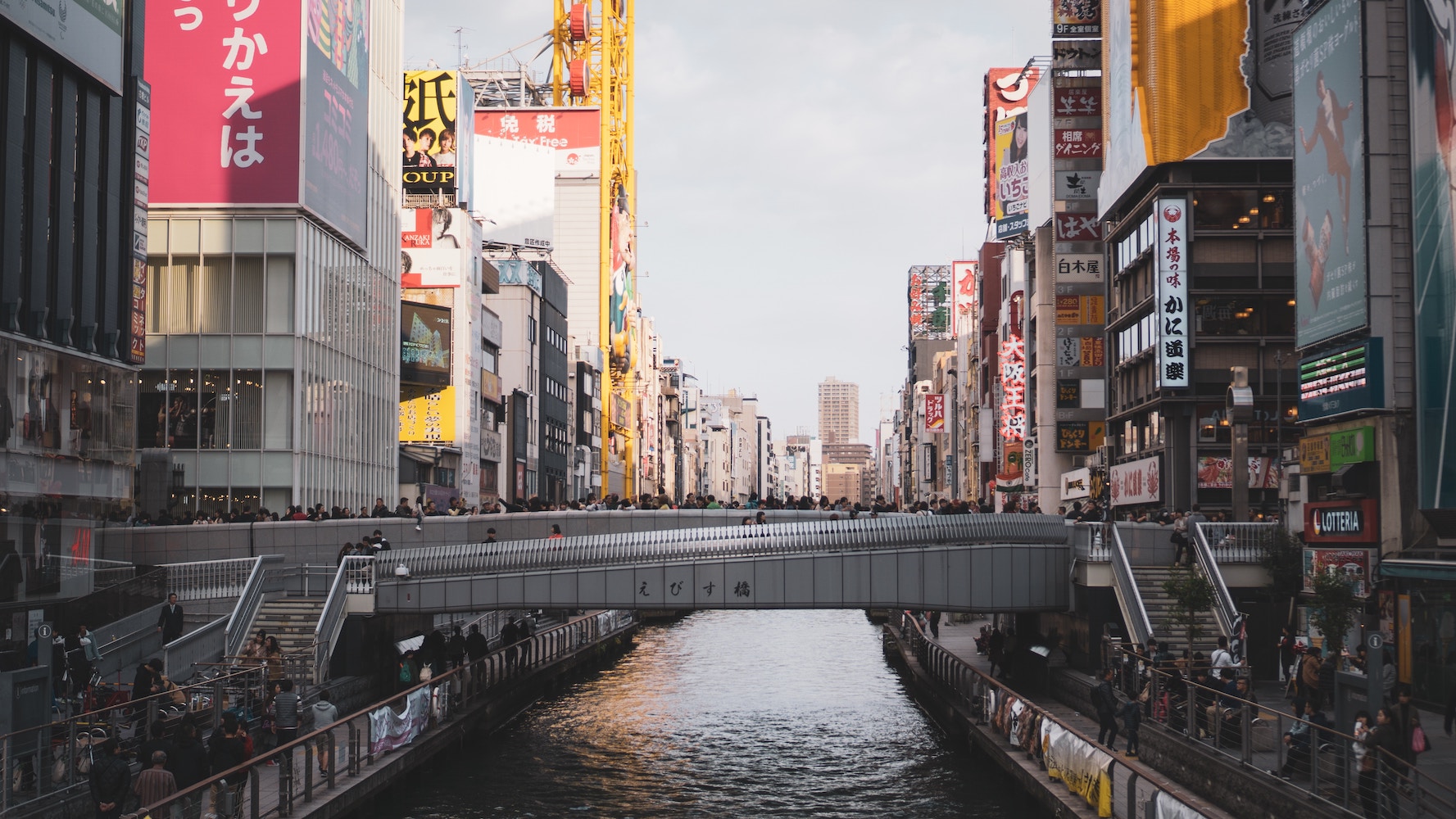 The Ebisu Bridge is a legendary structure that reaches over the canal and is lined with shops and famous sights. One of the most popular locations in the Dotonbori area, this bridge attracts visitors from around the world with specialities like Golden Dragon ramen, cheese hot dogs, yakiniku, takoyaki, dumplings, and Japanese crabs. You can take your picture with the Glico Running Man and enjoy gorgeous river views that reflect thousands of lights from either side of the canal.

16. The National Museum of Art, Osaka 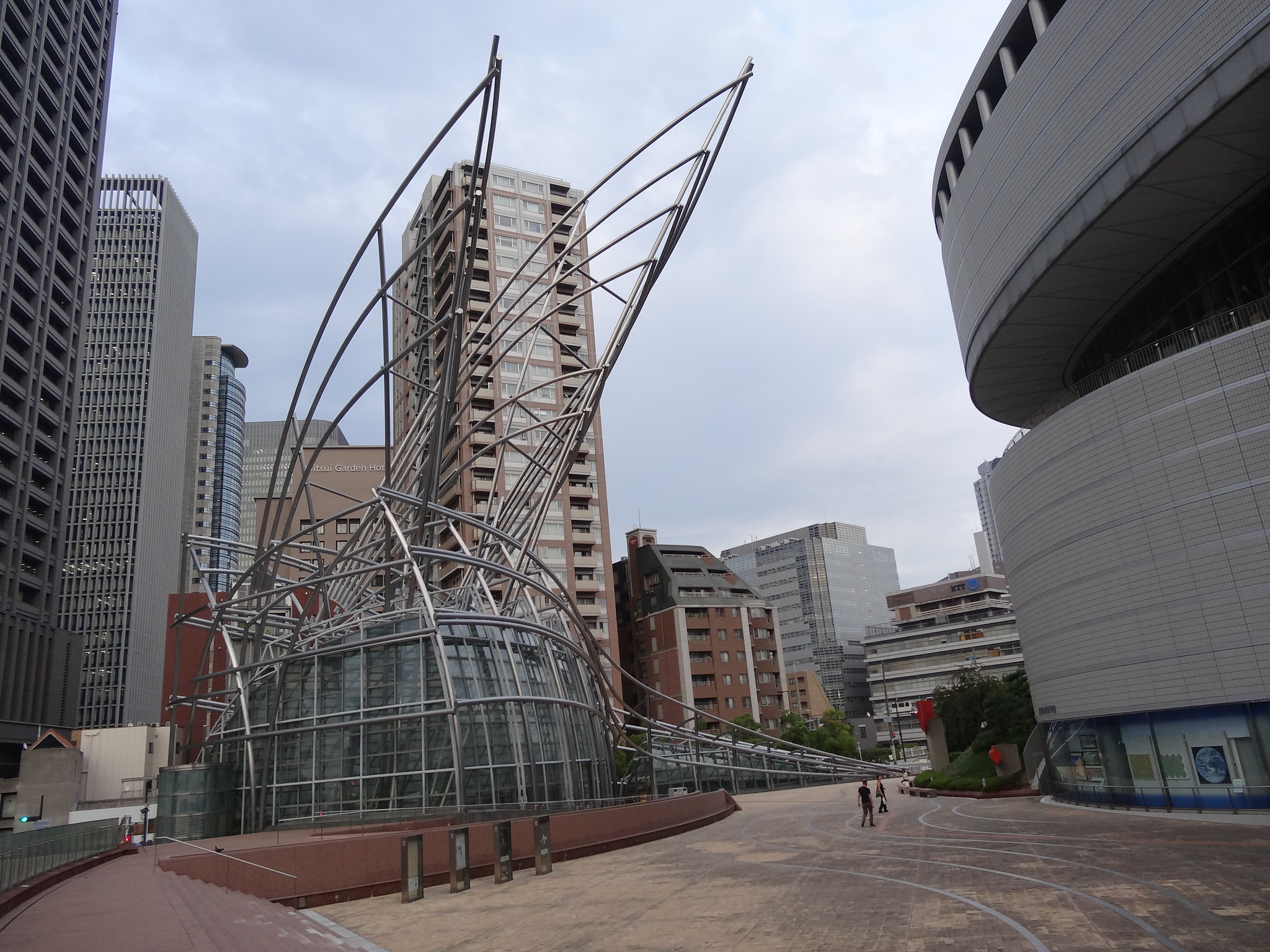 Opened in 1977, the NMAO was originally the fourth nation museum in Japan. Today, the museum offers Children’s Art Tours, Workshops, Self-Guided Tours, School Programs, and Meetings for Teachers to better spread the appreciation of world art throughout Japan. The museum hopes to stay true to their original objective “to collect, store, and publicly display the artworks […] needed to elucidate the relationship between developments in Japanese art and art from the rest of the world.”

The most prominent landmark of Umeda in Osaka, the Hep Five Ferris Wheel reaches 106 meters at its highest point and provides excellent views of the surrounding area. Part of the Hep Five shopping complex, the Ferris wheel is situated on the roof and features air conditioned gondolas. After enjoying the sights of the Osaka Harbor, Mount Ikoma, and the downtown area, visitors can shop until they drop, dine at the restaurants, or enjoy a movie at the Cineplex. 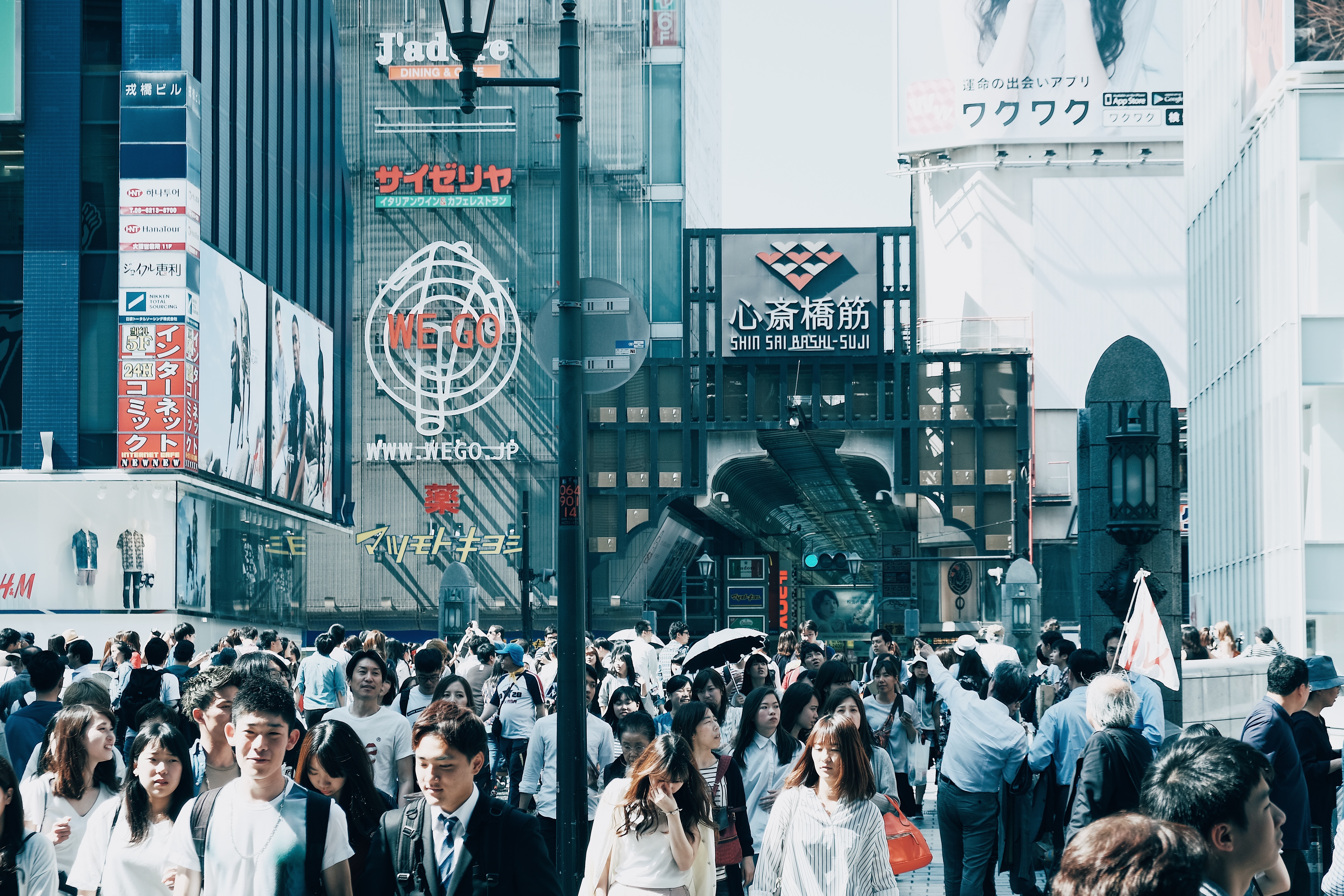 One of the best known shopping areas in Osaka, the Shinsaibashisuji Shopping Street dates back to almost 400 years ago, and has become one of the symbols of the city’s history and traditions. Visitors can browse clothing shops that sell both western and Japanese clothing, restaurants, boutiques, jewelers, fast food restaurants, and other great shops where souvenirs and mementos can be purchased.

If you can to Japan looking to buy some futuristic and interesting gadgets, then you’ll absolutely have to stop by Nipponbashi Denden Town! One of the largest commercial districts for electronics that rivals Akihabara in Tokyo, this spacious area is filled to the brim with anything and everything electronic. If you find yourself exhausted and hungry after scouring the plethora of electronic shops, there are plenty of cafes and restaurants where you can rest and enjoy local cuisine.

With numerous walking trails and grassy areas, the Kema Sakuranomiya Park is perfect for those looking to enjoy a stroll or jog through a gorgeously lush and green area of Japan. During the spring season the park is pack with visitors who come from around the world to view the 4,500 cherry trees while they bloom. Guests will have easier access to the Waterfront of Osaka Friendship, Osaka Amenity park, the Mint, and Water Square. Those who want a better view of both sides of the river can even book a tour on one of Osaka’s boat tours nearby.

If you’ve ever wanted to explore an area of Japan that many travelers often overlook or under appreciate, be sure to stop by (or spend all your time) in the traditional, yet modern, city of Osaka. From beautiful castles to amusement parks to gorgeous natural views, there’s no shortage of fun, relaxation, excitement, and adventure that’s just waiting for you in this veritable gourmand’s paradise. Book your ticket, reserve a room, and let the adventurous atmosphere that surrounds Osaka take care of the rest!

Wisteria D. Jones is an American writer currently living and working in Ibaraki, Japan. She loves traveling to new locations around Japan and writing about her experiences. She also enjoys writing series on Amazon, and has over 45 published works so far. As Wisteria always says, 'Happy reading, writing, working and living!'